There was a wonderful atmosphere at Priory Park on Saturday; things started early when the club hosted a pre-match lunch for our visitors from Billingham.  Also enjoying lunch were our match-day sponsors Spiral Printing; they contribute massively to the Club by printing the programmes and financing the renovations of the Spiral Lounge.  Also seated were several other sponsors and members from the Will & Pie Club, these are club stalwarts who have included in their wills a legacy to Macclesfield Rugby Club, a concept thought up by honorary life member Tony Close.

There was a very large crowd who made lots of noise during the game; and the first team was inspired to play entertaining rugby. Sam Stelmaszec, our regular scrum half, was absent from the side, earning his second cap for Poland, playing on the wing and winning against Switzerland 20-23.

Myles Hall filled-in for Sam, his first ever outing in a No 9 shirt, afterwards he said he was grateful for all the advice he had received during the game from his team-mates. The close defeat makes a dent in our league prospects, but when we visit Billingham for the return in March we’ll hopefully have our full first choice XV out.  The good news was that Blaydon the side above us also lost, so sit just two points in front.  It was a good contest of open running rugby for the crowd to enjoy, and Macclesfield’s dominant scrum. Billy Robinson, cornerstone of the scrum, was presented with the tankard for Man of the Match – very proud with his 2 month old baby, who has yet to miss coming to watch him play at home. 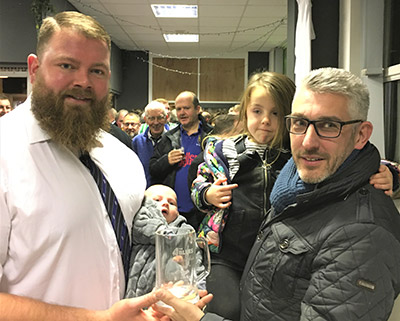 Head coach Andy Appleyard was disappointed with the result, but he knows the side will learn plenty from the loss.  Apps had made a passionate plea to members and supporters to attend and cheer the team on, which they did and another 5 minutes may have got the result needed.  There’s no game next Saturday so it gives him and Forwards Coach Rick Jones time to sort out a few things before the visit to Rossendale on December7th.  We hope Will Davies will have recovered, and the return of Sam Stelmazec will let Myles off-the-hook!

Our second team hosting Blackburn 2nds, conceded a try in the dying minutes to lose 15-22, so like the first team gained a losing bonus point.  A brilliant try by James Brocklehurst, a penalty try when the scrum was disrupted close to the defender’s line and a penalty by Jack Taylor completed the scoring for Macc.  The unlucky Pete Hardwick tore a bicep muscle after only 5 minutes but Lewis Smith came off the bench for a barnstorming game stepping up from the 4th team.  The forwards were dominant throughout led by evergreen Jim Curtis showing his class, he’s an old boy of London Scottish playing with greats like Jim Telfer and Gavin Hastings.   Pete Langley the Coach couldn’t be present, his Kings School duties keeping him busy elsewhere, he’ll be disappointed with the result, but will hope to bounce back next week.

After some hard work behind the scenes and with help from the 4th team, the 3s took a squad of 17 over to a strong Broughton Park 2nd Team. It was disappointing that Broughton could not field a front row, so scrums were uncontested from the start.

A good mixture of youth and experience was the flavour of the day but unfortunately an early shoulder injury to Joe Heginbotham, at Scrum Half swung the game in favour of Broughton who scored 3 tries before half time. The excellent Simon Street, and man of the match, scored a well deserved try just before the break to leave a score of 15-7 at HT. Unfortunately the second half was not the best for Macc with 4 further injuries and withdrawals leaving the 3s with 12 players on the field!

It was agreed to blow the whistle 10 minutes early, due to the injuries, with the final score being 29-7. Special thanks to Matt Harding and Andy Pierce, both in their mid 50s for making up the numbers.

On the positive side this group of players never stopped battling throughout with immense defence. Great to see such young players: Ross Mcgone, Ben Sleath and Joe Hegginbotham, along with Michael Moore, play with such aggression and skill with limited ball against a good side. The future of the club is bright if we can keep these young lads motivated and playing regularly.

⚔️ One of the greatest RWC rivalries of all time Who else can't wait for @FranceRugby 🆚 @AllBlacks at #RWC2023?

British and Irish Lions series deciders: A look back 🏉 For the third tour in succession, a Lions 🦁 Test series comes down to a compelling final-match decider. As a result, we look at five of the most recent 🇿🇦🇦🇺🇳🇿 👇👇👇

🇦🇷 Switching handball for rugby 🤾‍♂️ Will @CAHandball have what it takes to win? 06.08.21, 8pm BST #UltimateRugbyChallenges