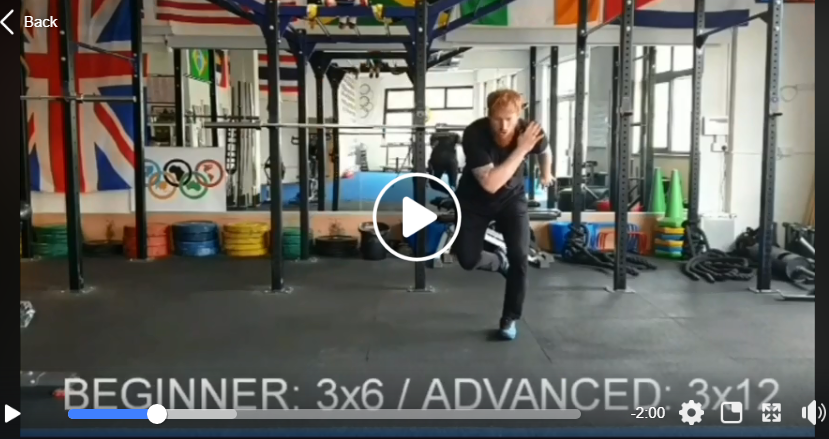 We’ve completed the first week of lockdown and the second weekend of not playing rugby; Priory Park is closed, with no matches or training sessions taking place. Thankfully, to save our sanity several virtual rugby initiatives have stepped in to fill the massive void left by the termination of live rugby.

The Rugby Club’s initiatives during the past week have tried to save the day for the rugby-mad! The launch of MaccTive has really taken-off with the MRUFC membership; 250 people have joined the social media groups, aimed at keeping fit and having fun while isolating in our lockdowns at home. With the brilliant assistance of Jason Curtis from 5S Gym, members have been tuning in to live sessions, using ZOOM on their ‘phone or PC, transmitted twice daily at 7.30 – 8.00am and 7.30 – 8.00pm. As Head Coach Andy Appleyard has said: “Do them all and become a beast or pick and choose.” This regime is then supplemented with a weekly challenge, the first week being a shuttle run beep-test demonstrated by Macclesfield Full Back and ace goal kicker Will Davies. The boys and girls from the Mini and Junior’s section picked up the challenge, recording their activities and posting on MaccTive.

This week it was a ‘Passing Challenge’, to be completed as a squad, a family or a group of friends. Each member of the team/squad/family to record a short video of them receiving a ball and passing it on; then to paste these clips together to create a virtual-video-string of passes. The Ladies’ Squad had already shown the way, producing a brilliant little video of their passing skills as a birthday treat for their coach Simon Dempsey. ‘Demps’ was overcome with the video – 10/10, although there was the odd fumbled pass – for the camera of course. This must have inspired the youngsters and Coaches of the U10s as they produced a remarkable short-film featuring no-less than 44 players and 5 Coaches. What next?

Thankfully England Rugby has taken pity on the rugby-deprived; posting films of famous England wins (Sadly, what would be a small volume for rugby folk in Italy). At a local level, in Macclesfield, rugby folk have tried to keep their spirits up by posting rugby pictures on social media, with no explanation, just for a bit of sporting light relief – and it has worked. Macclesfield President, and former Captain, Peter Harper posted a picture last seen in the Macclesfield Express in 1979 of himself (with 70s moustache) Nick Hynes, Chief Inspector Lol Mellor and Dave Philips.

Another picture creating a great deal of comment was that of sexagenarian David Wilkinson, playing in his supposed last game, attempting to side-step Forwards’ Coach Rick Jones – ‘what happened next’ created much humour! Seen for the first time by all was a TV video clip of the Cheshire team, in the Twickenham tunnel, with the Gloucestershire team in the 2002 final. Four players from Macclesfield represented Cheshire that day: Steve Mannion, Iain Taylor, Scott Goodfellow and Jeremy Bostock. According to one of the players, the selectors got it wrong that day: “They played Boz at 6 instead of the second row, otherwise we would have won”; Cheshire lost 23 – 20. Amazingly three of those players now play for the Fourth Team at Macclesfield.

Emergency Appeal & Update from the Chairman

Stephen Branch, Chairman of MRUFC, was pleased to report, to the membership, that the Club had now a much clearer picture of the other support that might be available from other sources. Going on to say:  “After the fantastic support during the last week and the actions we have been able to take to reduce the costs and liabilities of the Club, and also having a more clear picture, it is fair to say that the Club has its head above the waterline”. He gave a huge thank you to all individuals and groups that had contributed so far to the appeal, but also encouraged, those that could, to continue to support the fund.

Due to the premature finishing of the Macclesfield 3rd team league all management and players were reasonably happy with the end of season report, Played 19, Won 8 and losing 11. Macclesfield finished in the bottom half of the table but quite comfortably above the relegation places.

In what turned out to be a very competitive league of 13 teams and mostly 2nd teams at that, our 3rd team should be justly proud of their efforts and put in some credible performances noticeably against Glossop 2nd team at home and runaway leaders Kirkby Lonsdale 2s who we ran very close losing only by a score at home.

When I took over the running of the 3rd team I was under no illusion to the task at hand. Rugby Club 3rd teams throughout the country have always been the most difficult of teams to organise, sandwiched between 2nd teams with ambitious players pushing for 1st team honours and 4th teams that are typically social sides with older players who have no real ambitions to play in higher competitive leagues. There is no doubt with the management team we have in place: Pete Langley (2nd team), myself (3rd team) and Boz (4th team) that because we have been communicating from week to week about player availability the Club has been successful in managing to put a side out every week.

My plan was to bring through some of the younger players that had come up through the Club from the junior sections, players that perhaps didn’t have the time or maybe motivation to train and play with the second team. With the experience of playing senior rugby at 3rd team level without too much pressure, young players such as Benn Hadfield, Jonny Thomson, Tom Leicester, Harry Grant, Harry King, James Brocklehurst, Jack Caswell & Sam Bancroft have all gone on to play for the 2nd team this season, with distinction. I am sure that these players will go on to represent the 1st team at some time soon, they are certainly good enough. My player of the season being Ben Holden, outstanding in every game he turned out for us. Not forgetting the regular 3rd team players, the backbone of the team, Nick Smith, Chris Gleave and the evergreen John Poyser turning out to play week after week we would have no 3rd team.

Some weeks we really did struggle to put 15 men out on the field, indeed at Bolton and Burnage we had only 12 men, also at Warrington, but both these sides helped us out by lending us a player or 2 to help make up the number.

So the season comes to rather an abrupt end unfortunately and God willing we will all be back in September to take to the field once more and then head to the bar afterwards for well earned refreshment.

The Spirit of Rugby lives on, and long may it continue!

‘Sedge-Tiger’ the rugby guru of Sedgley Park, has written in the Press, on several occasions, that: “Macclesfield Rugby Club has the best pies in the rugby leagues”.  His opinion is not wasted on the membership; who love Maggie and Barry’s pies so much that they have persuaded them to carry on cooking them up for them while the Club is closed.

Maggie and Barry Priestly’s catering business ‘The Barbecue’, is Priory Park’s catering facility, which the Club is exceedingly proud of. They have the full backing of the Club to continue to keep the members happy with their wonderful pies, details of which are available on the Club’s website and social media.