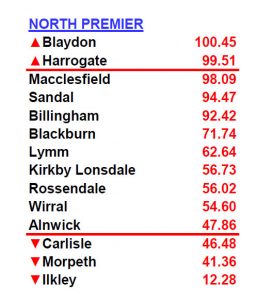 Yes, it’s official; the RFU yesterday published the end of season final league standings for 2019-2020. Because of the unfinished nature of rugby in the various leagues, games in hand etc, the RFU has applied its own computation/methodology to create, in their view, a fair result. In essence the RFU used a methodology that looked at a team’s average points in their home and away fixtures and applied this to any remaining un-played fixtures. This moved Macclesfield into 3rd position with Blaydon and Harrogate in the 1st and 2nd positions respectively, and promoted into National 2 North. One has to feel sorry for the squad and coaches who believed that with the games in hand would have gone on to win the league.

And so another season in the North Premier, or is it? It would appear that after promotions and relegations, the Premier League structure will be as follows North 17 teams, Midlands 11 teams and 15/13 in the two South divisions. It is unlikely to remain like this with possibly 3 teams moving into the Midlands from the North; Macclesfield could certainly be one of them. No doubt we will learn more in the next couple of months, unless the RFU restructure the fourth tier – but that’s another story.

A VIEW FROM THE STAND

A disappointing conclusion (so far), but it was a most enjoyable season, none the less. Some fabulous high-scoring wins, some desperate, get-out-of-jail fight backs and a few hard-to-swallow losses.

It all started with the stripy-jackets sharing the bus, up to old foes Blaydon, to kick-off the season on their plastic pitch. A hard-to-swallow result was due to a miss-firing lineout and trying to play them at their own game on their plastic pitch; but the scrum was awesome! Walking back to the Clubhouse my ear was bent by a member: “It’s packs what win this league, way, ay man yee’ll be reet”. In retrospect how many points was Blaydon’s pitch worth during the season?

Back at Priory Park the lads showed us what they could do with a bonus point win over Morpeth. The game was as competitive as the previous week but the balance was in the boys favour with some cracking tries and a standing ovation from the Macclesfield Faithful.

A trip to the beautiful ground of Ilkely followed, where Witness Mandhiza’s considerable presence resulted in the first of the tries, Harry Oliver bagging the last for the bonus points. A second half pasting of Kirkby Lonsdale followed with a final score of 39 – 3, a brace of tries for Sam Stelmaszeck and Myles Hall kept Wilkey’s “Whaa-Hoo” music reverberating around the Park. Harrogate away was Macc’s next serious examination and whilst the pack was superior, Harrogate nicked it at the death in a low scoring game. 5 wins on the trot would follow with big scores against Carlisle (55) and Sandal (46).

The next big challenge was against table-toppers Billingham unbeaten in 10, Macclesfield sitting in third, full of confidence, unbeaten at Priory Park. The game kicked-off and it was easy to see why Billingham had been doing so well. In their Fly Half, Peter Evans, they had a Coach/Captain that could pull the strings like no other in the North Premier. Within minutes he had orchestrated a 14 point lead. But Macc were far from undone as their pack battered the opposition, scrum after scrum. The Alikadoos on the Stand letting the referee know of his leniency. The Macc Faithful roared their support and the pack won a penalty try. The second half saw Sam Broster cut inside off his left (not for the first time) to go under the posts. It was nip-and-tuck, Macc’s forward dominance, spurred on by the President’s shouts of: “Give them a scrum Macc”, against Evans’s boot and vision, and it was the latter that stole the day, with a long cut-out pass for an easy run to the line for the winger. It was a bitter pill, and one that would stay in the mouth for many a week.

The rest of the season paled, other than sweet revenge against Harrogate. There were two losses: a thrown away game against Rossendale (literally) and a mud-bath revenge victory for Sandal’s big pack. But the game against old enemies ‘Gate, was probably one of the best days at Priory Park for a long time; a massive boisterous crowd and a packed Clubhouse to follow. Harrogate threw everything they could at Macc, but were constantly driven back. The score of 35-14 was somewhat unexpected, but Macclesfield on the day were exceptional with another MOTM performance by Josh Redfern.

What might have been; the pack was always immense, the young guns got better every week and it was always great fun on the Stand, in the bus and at various clubhouses; looking forward to more of the same –  as soon as possible!

AND FROM ANDY APPLEYARD

It’s been a great journey this season; and our squad has grown stronger as a result of it. I want to credit every player that has been involved in the campaign. The boys dedicate so much time to their rugby, it’s a second job, and it’s a shame we didn’t get the chance to finish but we now look to the future.

This also includes the lads who did not quite make it but have trained every week, which has then given us quality game prep; these boys have also been the back bone of the 2nds.

We now look forward to keep developing our identity of rugby, and using the quality that we have retained, which is 95% of the current squad.

Many thanks to the supporters for creating a real fortress at Priory Park; you are our 16th man.

We look forward to next season.