A historical rambling by Bob Jenner

In an age where more and more information is digitised and distributed electronically, you can learn a lot about the development and culture of a rugby club from its old printed fixture cards and not just that the fixtures get better or worse or closer/further away. 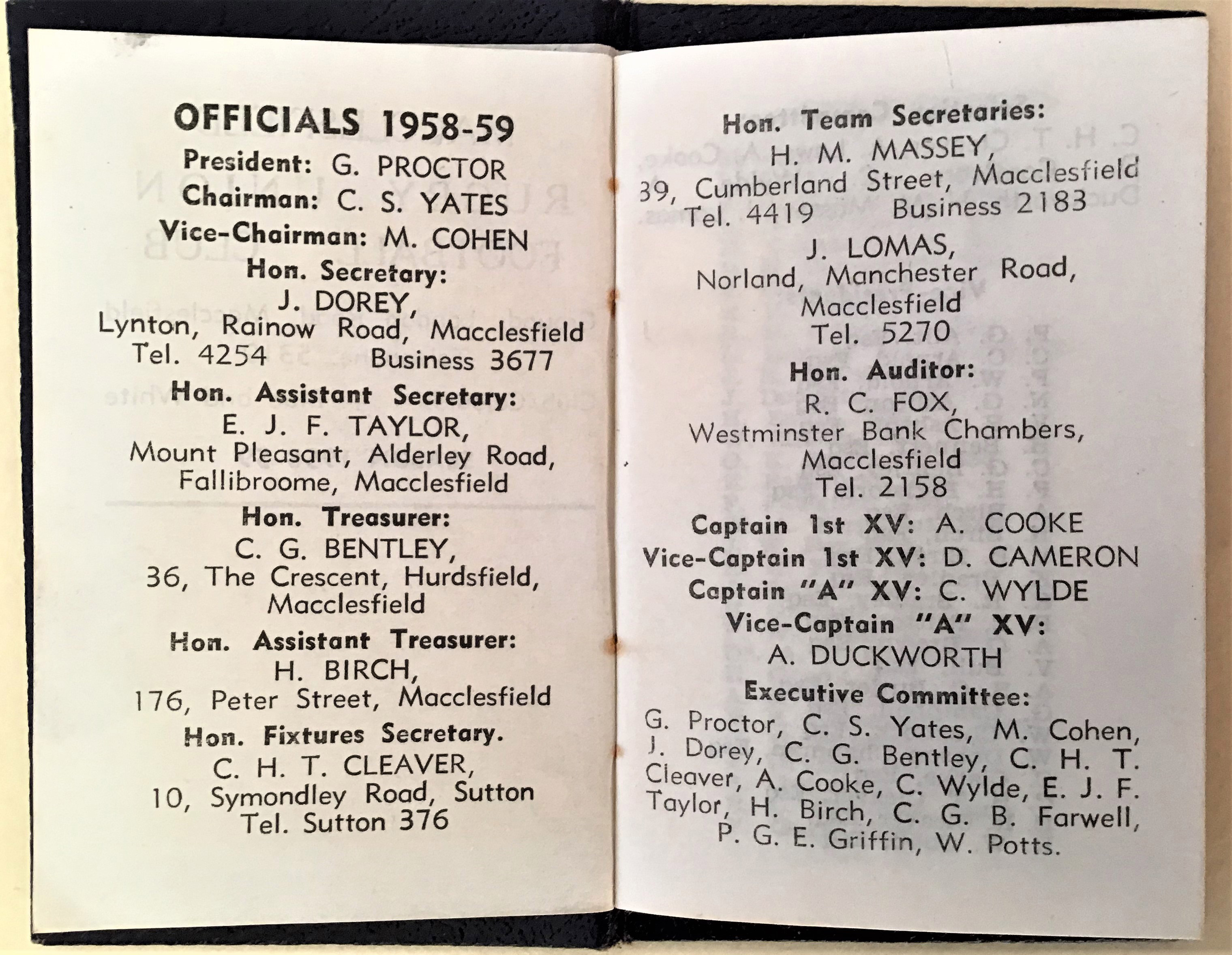 I put my hands on a random selection recently, covering the mid 1950s to mid 1990s; the covers graduated from patterned card and gold leaf title through to all paper, that might suggest that money was getting tighter but the newer card contained the details of fixtures for eight senior men’s teams, a ladies’ team, Colts, Minis and Juniors whilst the older card was for only two men’s teams! So quantity was an issue many years ago as much as it is today. And yet, from 1995 how many of the Under 8 team who turned out at Whitchurch on the 1st Oct (25 years ago) are still playing, let alone for Macclesfield? 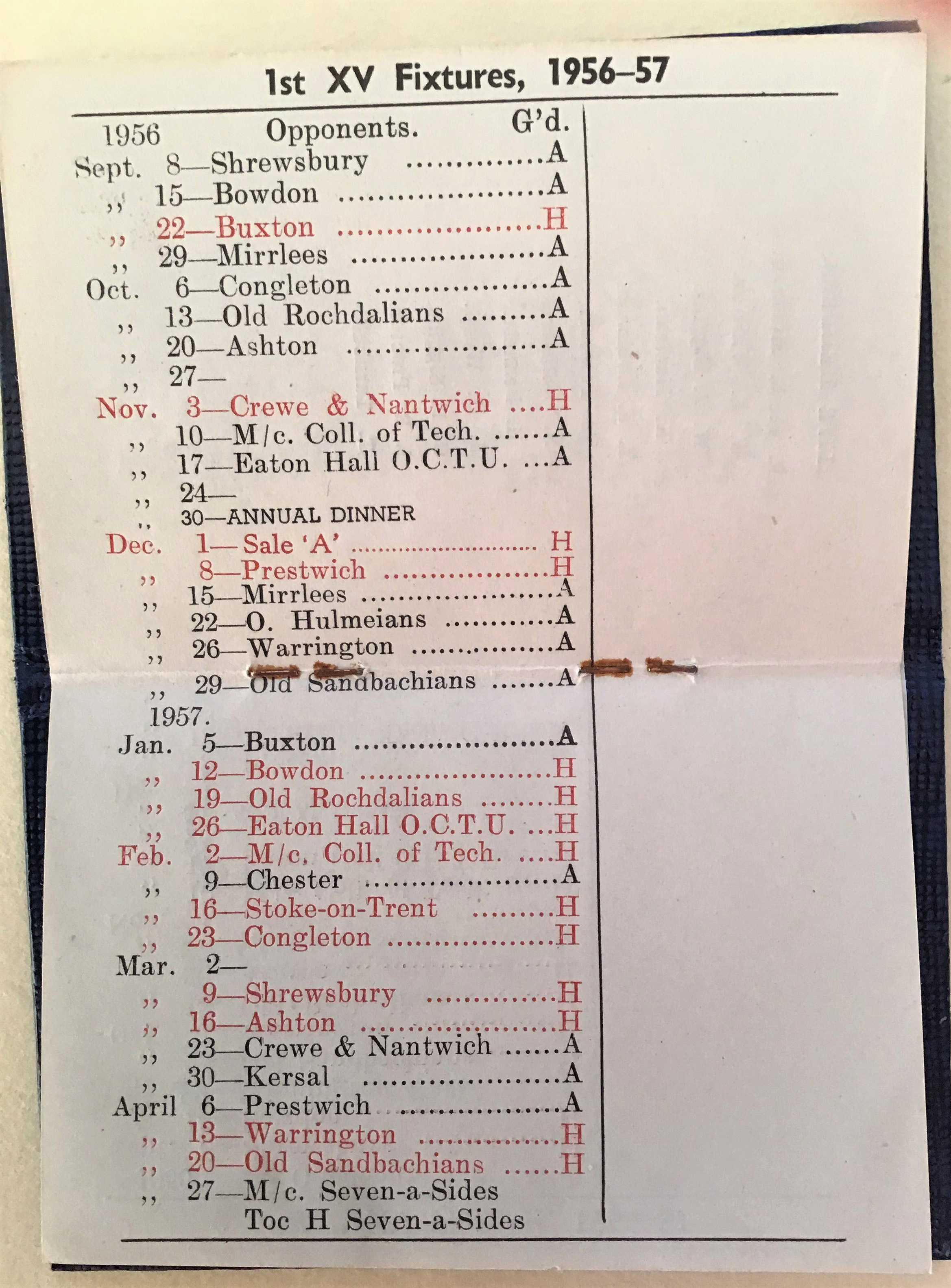 In terms of Macclesfield being a community club, it is interesting to see that various officials from 1995 are still involved with the club, either directly or indirectly. The first team captain and second team vice captain regularly turn up to watch their respective sons play first team rugby (that is Rob Davies and John Percival respectively), whilst ex President Barry Day is part of the Grounds-men team of volunteers. All worthy continuations of service but if we look at the 1958-9 card (over 60 years ago and the first time officials are listed) we find that the Assistant Secretary was EJF Taylor and Wilf Potts served on the Executive Committee (even that is not a new name). John and Wilf are still regular spectators at Priory Park (subject to C-19 restrictions obviously). 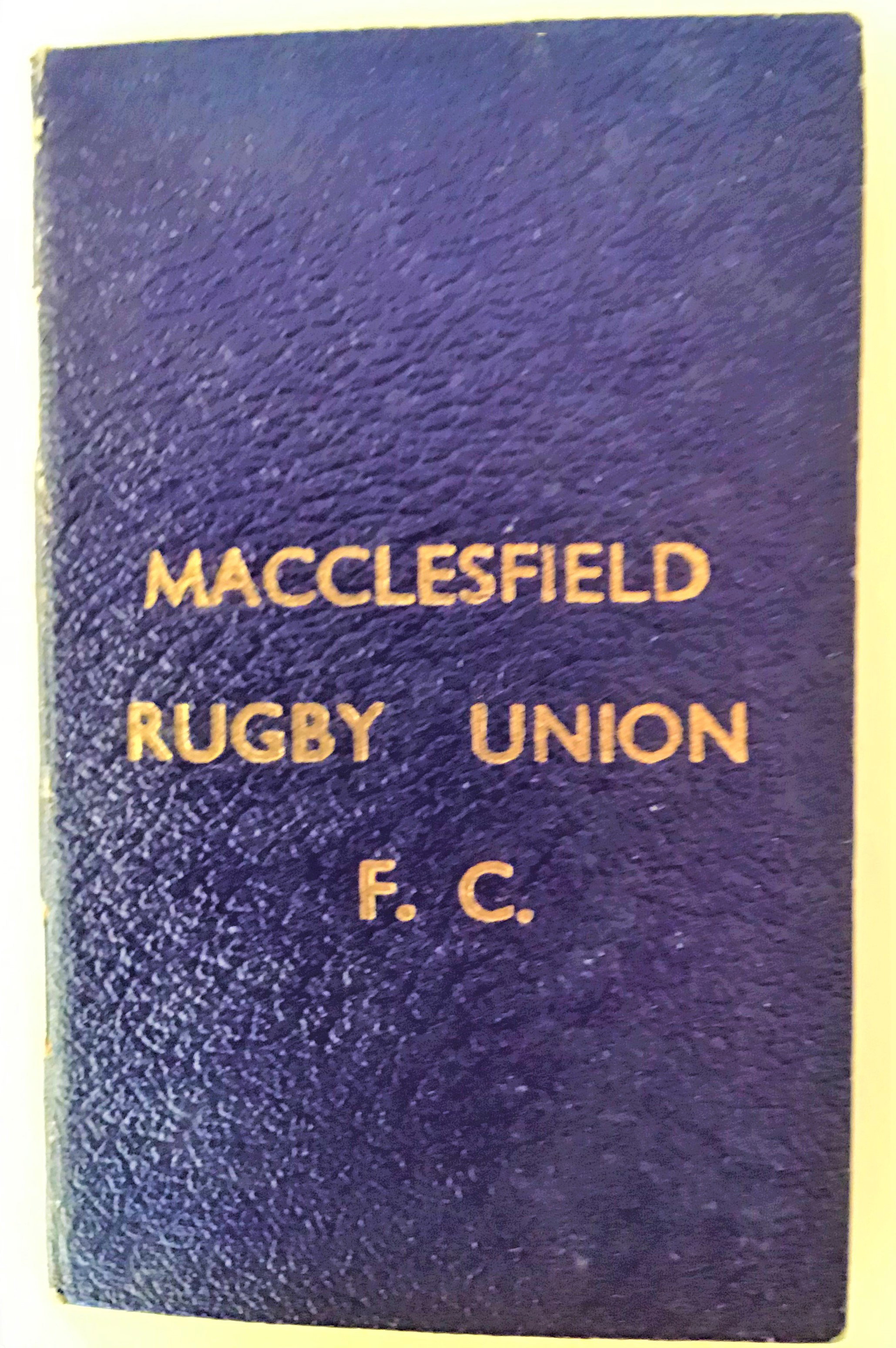 So much for quantity, what about the quality; in an age of rugby meritocracy where leagues guarantee opposition, relative to one’s merit, it is hard to remember that many years ago it was not who you were, but who you knew; no ‘senior’ clubs would countenance giving a game at first team level to opposition who were not of their historical standing. Only with the growth of national cup rugby and then League rugby did the landscape begin to change. Like it or not, 60-70 years ago Macc were a small back-water rugby enclave. Anyone with playing aspirations knew they had to move to Sale to further their ambitions. In 1956-7 the first team were scheduled to play 31, 15-a-side games (interestingly not that different from the 26-30 scheduled today).  It included two away fixtures with Mirrlees. Who? Well, Mirrlees were a Stockport based engineering company, based at what is now Mirrlees Fields (near Stepping Hill). Was this the original charabanc away trip? Would that be why they were only played away? Who can say; perhaps John Taylor or Wilf Potts? All we can say, is that the A XV (the seconds) didn’t have this fixture on their list. On the occasion that the firsts were playing at Mirrlees the seconds had ‘red’ fixtures against Old Sandbachians and North Staffs Technical College (home fixtures were printed in red, away in black – a nice little typographical bit of style rarely deployed in the digital age). So now the plot thickens because most fixtures were both teams against the same opposition. But the first team played Old Sandbachians at a different time. Mind you the first team played Manchester College of Technology rather than the more prosaic North Staffs College. In fact they also played Eaton Hall Officer Cadet Training Unit (OCTU) the following week a unique double of fixtures surely indicative of the elitism of first team rugby over second team rugby? Just as there is longevity in personnel so in fixtures it’s just that everyone has moved on. Whilst not a single opposition in 1956-7 features on today’s first team fixture list, Old Sandbachians eventually became simply Sandbach, and but for a geographical sleight of hand, would have been in the same League as Macclesfield last season. Other teams still feature on our various fixture lists like: Bowdon, Congleton, Warrington, Buxton, Stoke, Kersal (in their Altrincham Kersal guise) and Winnington Park, but not at the same level.

In these days of Brexit, plus ça change, plus c’est la même chose.