If there is one thing that defines the ONE CLUB ethos of MRUFC it is the unstinted dedication of our Volunteers, They give freely of, their time, energy and expertise for the long-term future of the Club; whilst improving the experience for all of our members and supporters. Our Heroes proudly sport the ONE CLUB BADGE! Following is the first of a series of features and insights into the work that goes on behind the scenes, our heroes:

Second in Macclesfield Rugby Club’s series of ‘Our Heroes’ we feature the Sampson brothers, Stephen and Pete, with their Dad in support, back at the farm. We have Stephen’s wife, to thank for the association, as she enrolled their Son into the Mini Rugby section, which meant that Stephen had to give up his Sunday morning Clay Pigeon Shooting to stand pitch-side. He was a bit miffed at the time but soon fell into the crowd with the other Dads, and after a few years joined the Walking Rugby group with his pal Tristan Wood; and after a while brother Pete joined as his lad also started playing in the Minis.  At this stage it should be pointed out that the Sampson’s are a farming family and that Stephen is a Tractor and agricultural vehicle fanatic (nerdish collection of toy tractors and finance broker for large agricultural machinery). It’s no doubt that the bits of machinery at the Club, will have attracted his attention, and he was soon to offer help with the maintenance; he recalls: “The first job was the big blue mower, no one wanted to sort it, so once we replaced the bits and had done the job, I sent Apps a bill of two and a half thousand quid, as a joke, although that was the real commercial cost”. Stephen explained that you could probably buy a new one for less. After that he repaired and serviced, with the help of his Dad, most of the Club’s machinery, culminating with the felling, cutting up and disposing of a large dead tree at the entrance of Priory Park. He told me that he has utter respect for Webbers, who he refers to as ‘Sir John’: “He’s XX years of age and still doing it!” Focus for Stephen now is working with a dedicated team to restore the grounds behind the mound back to playing surfaces; he would also like to acquire a trailer for Webbers and Nemmy to move materials around the Park easier, plus some other specialised equipment – anyone with deep pockets? 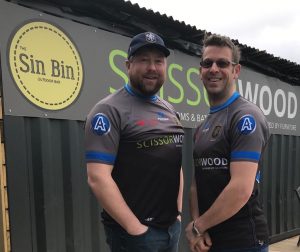 Brother Pete, another paid-up member of MRUFC, makes his living outside of the farming world; he and his business partner Nick Heath own Macclesfield Kitchen and Bathroom business Scissorwood. When the Sin Bin bar was being developed at the Rugby Club Pete offered the services of the company to fit-out the bar. Naturally General Manager Andy Appleyard bit-off-their-hands, and Pete, helped by big brother Stephen, set about transforming the shell of a container into a custom designed piece of timber craftsmanship, all to Kirsty Wallis’s specification. Kirsty was well pleased with the outcome: “Scissorwood’s amazing design and workmanship makes working in the Sin Bin so enjoyable, it’s a fantastic bar that will serve many people to come”.

I asked Pete about the kind of work that Scissorwood do besides their residential work: “We were doing a lot of refurbs of student accommodation until the Grenfell disaster, then we concentrated on high end kitchens using quality hardwoods”;  he told me of an unusual project that came about through Covid and their computer precision drilling and cutting machinery (CNC): “We were approached by a contractor to the Post Office, to produce nearly five thousand ‘Sneeze Screens’, we put in a price and the next day I got a phone call to say that an articulated lorry with 13 tons of plastic was waiting outside of our premises, it was the first Covid lockdown and I was still in bed”. The long and the short of it was that they put in a fifty four hour and a twelve hour shift to get the job done; a miracle in the middle of a crisis. So if you need a top quality kitchen or bathroom doing in a hurry, you know where to go www.scissorwood.co.uk. 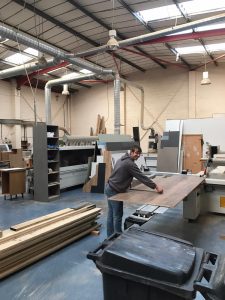 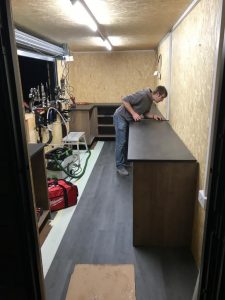 The next project for Scissorwood at Macc Rugby is the refitting/redesign of the main Clubhouse bar, another major project for the Club and one that we just couldn’t contemplate without the generous support of Scissorwood’s expertise, time and effort. The objective is to finish the job that the likes of James Jennings and his team started, to turn the Club Lounge into a facility that the members and community can use for any occasion. Stephen told me that they feed off Andy Appleyard’s enthusiasm; that they love the Club and can’t wait to get back playing Walking Rugby. Stephen is keen to have a go at the real thing with the fourth team, although he’s got to shuffle up Kilimanjaro first, with brother Pete and Tristan Wood. Now there’s another story Macc Rugby on top of Africa!

On behalf of the Club a big “Whaa Hoo” for the Sampsons: Dad, Graham, Stephen and Pete. 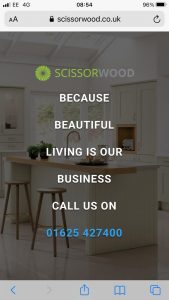