On a recent Club podcast I was taken by the challenges presented to Steve Branch and Andy Appleyard (Club Chairman and General Manager) by the cessation of normal club activity, and their innovative responses in keeping the club viable for the restart whenever that arrives. While I was considering their challenges I came across an Exercise Book in the Club’ Archive, The Management Committee Minutes Book for season 1946-7. By serendipity it documents the Club’s restart after the six year break caused by the Second World War.

The very first page (see photo) documents a meeting that took place at the home of W E Whiston. This meeting was to bring about the restart of the Rugby Club after the Second World War. By coincidence W.E.Whiston was one of the ‘Originals’, who had met in 1926 to restart Rugby in Macclesfield, and had captained the Club during those early years. At his house on Thursday May 8th 1946 seven former club members determined that the circumstances were right to get Macclesfield’s Rugby Club back on the field again. All they needed was a team, shirts, a pitch oh and a ball! Without further ado they declared themselves to be the new Committee and set about finding the other bits-and-bobs required to restart a rugby club.

For a pitch to play on they agreed to see if they could resume the pre-war arrangements with Lane End Farm, Fallibroome, whilst having informal discussions with Kings School and the Cricket Club just in case. Fallibroome was the favourite because the original Club Hut was still on site although it had sustained a fair amount of damage over the six years of non-use (echoes of today’s vandalism!). Even without damage the accommodation was hardly comfortable. The whole building was about 9m x 3m divided into 2/3rds for the home team and 1/3 for the away team “Welcome to Macclesfield but don’t make yourselves too comfortable”!

Two weeks later they met again to review progress. Without the benefit of the internet or social media it was necessary to undertake these reviews face-to-face so the Bate Hall Hotel became the meeting place of choice.

The first progress update was a bit of a curate’s egg with equal measures of good and bad news. W Dobson Chapman reported that the Club Hut, whilst essentially sound, would require about £130 of repair work to be usable. Today this might be the loose change in Pete Harper’s pocket but the Club had survived the war years with an overdraft of £217 and no income stream, whilst it was estimated that running just one team would cost £25. Initially the only foreseeable source of income would be the annual subscription to be levied from the non-existent members. The pre-war subscription had been a guinea (£105 today) so this was accepted as the first post-war subscription. But the need for money was immediate, where was it going to come from?

The answer then, as now, was to launch a series of fund raising activities, one being to hold a dance. The long established link between the Club and Kings was also leant on and the Kings School rugby team were asked to organise a dance at the School with proceeds to go to the Rugby Club. The Club’s Dance contributed about £110 to club funds of which the draw contributed about £90 and the Bar about £20. Today we would expect that ratio to be reversed!

But the other and main fund raiser was to appeal to the best instincts of the Vice Presidents who have survived the War. This appeal is readily recognised by many ex-Committee men alive today, the Once-in-a-lifetime appeal for funds, the appeal to end all appeals, never to be repeated (the promise usually uttered with fingers crossed). Within weeks just over £100 had been received from about 50 donors with many more promises arriving daily. The success of this initiative can be gauged by restating these numbers in today’s figures. So just over half of the Club’s membership had each made a donation equal to twice the annual subscription (today that would be equivalent to £200). Clearly Rugby had a lot of support from the people of Macclesfield back in 1947.

In June the Club took its next big step to returning to rugby when Club Secretary, A A Arnold, was instructed to inform the Rugby Football Union (RFU) and Cheshire Rugby Union, that the Club were reforming. Plans were made to advertise for interested parties (players and supporters) to attend a prospective players’ meeting to be held at Kings School. This meeting would include an open invite to all current Kings School players, as there were no age limitations in those days.

Usefully someone had identified a source of wood and wooden chairs that could be used for repairs and within the Club Hut. The Committee were informed that the initial outlay, £13, could be covered, or at least £9 of it, by selling-off any unused wood. Another significant item of expenditure was Club Shirts, an item made even more difficult by rationing, that was still in full force at the time. The Secretary was instructed to approach the local Assistance Board (a form of Benefits Board) to see if coupons could be used for kit allocations. Eventually the President, Mr. T. Turnbull, provided the coupons for jerseys, no questions. By July the Committee were ready to tender for essential repairs on the hut but in a fiscally prudent approach, limit the work (and the costs) to what club members could do.

As September came around they had a ground agreement ready for sign-off and funds to cover the hut repairs. So the scene was set for a ‘return to rugby’. A fixture list was drawn up, and the Referees Society was contacted to confirm the availability of referees. In these cash short times scheduling away fixtures was slightly more onerous than simply “are we/are they good enough”. They could not contemplate travels to say north Lancashire because of the time and cost of travel. After some discussion it was agreed that private cars would be used as taxis and that the Vice Captain would collect a shilling (5p in today’s money) per player per game to cover expenses.

On the 9th Dec the Committee called an Extraordinary General Meeting at the George Hotel, Jordangate. This meeting transferred management of the Club from the original group of enthusiasts to an elected Club Committee. There were about 30 people present to hear that the team had made a successful start to the season, and that the finances were in ‘rude health’. The first ‘Restart’ Annual General Meeting was scheduled for June the following year.

At that first AGM members learned that such were the finances that a number of substantial debts had been paid off. In support of the Club funds it was agreed to carry out regular match day collections. Given they were operating only one team regularly we might wonder at how successful this collection might be. Some idea of the level of support is indicated by the intention to print 250 fixture cards for the next season, this whilst running one team (and an occasional second); off -field support must have been quite substantial.

At this meeting various Club Rules were amended and formalised. In this the Selection Committee were to comprise two non players as Chair and Vice, 1st team captain and vice-captain, a co-opted  2nd XV Captain (if one existed) and up to four other members (of whom at least two should be players). Potentially nine people selecting a team of fifteen players, today’s selectors don’t know how easy they have it! And on that note of long and verbose meetings this meeting was clearly a fine example as it closed at 10:45pm. The Secretary pencilled his own note to the closing minute to inform posterity that “as the beer had finished and the Sec had writing cramp”. Reminds me of a few meetings I have attended!

There is still nothing for Bob Jenner to add to his rugby archives for February/March 2021; rugby continues to be confined to the television with both the Premiership and the Six Nations providing varying degrees of entertainment. But there’s good News around the corner, with a new Roadmap for Return2Rugby just published by the RFU. Look out next week for the Club’s plans for rugby from now through to ‘The summer of Fun’! 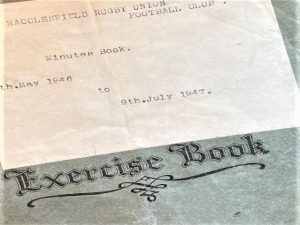