Ollie Wheelton’s coaches and teammates were saddened to hear of his recent lost battle with cancer, after a relatively short fight with the disease. Ian Scott, one of his coaches at MRUFC, pays tribute to his time at the Club. 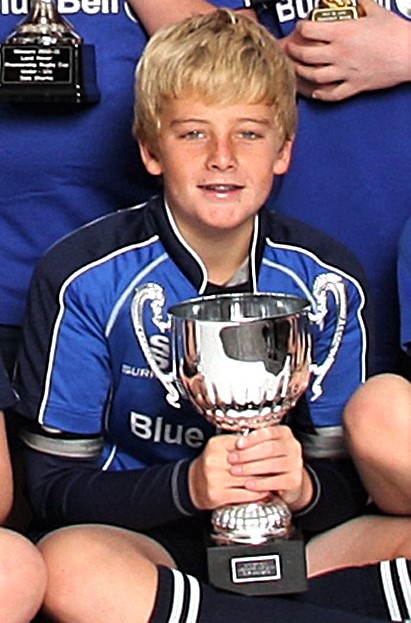 “Ollie was a major part of one of the most successful mini/junior squads Macclesfield Rugby Club has ever produced, winning the Cheshire Cup nearly every year from when Ollie joined at U8s up to U15s, only narrowly missing out at U14’s to Caldy in the semifinals; but made amends the following year in an epic final. On top of that, he won the Land Rover Cup twice in 2010 with U11s and again in 2011 with the U12s.

From the first moment he started at the Club, the coaches could see what a naturally talented sportsman he was – great hand eye coordination and a strong right boot; so he naturally played a lot of his early rugby at Standoff before moving to the Center.

The squad entered a national tournament at Nottingham in 2009 which, if they won, would mean that they would play in Finals Day at Twickenham before the Premiership Final. On the first attempt, they narrowly lost out but the following year they won it, so Ollie and his teammates made their way to Twickenham in May 2010 to play on the hallowed turf against the best in the country. A great day out by all, and Macclesfield got through to the final which was drawn with 1 try each and the trophy presented by Nick Abendanon”.

Ollie went to the Cheshire U15 trials, whilst at Stockport Grammar School, and continued playing rugby with the Colts. He then concentrated on cricket; David Cowan recalls him joining him in the middle: “I was already on about 30 when he came in, I don’t think I scored another run, Ollie just stroked virtually every ball to the boundary, as he quickly made is ton; a very talented young player”.

Ollie then went to play at Langley along with some of his pals; Langley Cricket Club Friendly Team Captain David Frame recounts Ollie’s playing career at the Club. “In 2016 at the age of 16 Ollie joined Langley Cricket Club having been a very successful junior at Macclesfield Cricket Club where he excelled at all ages groups.

Ollie made a steady start scoring 11 away at Sandbach 1st XI, it was plainly obvious that Ollie was very talented; the rest of the season saw Ollie play a mixture of 1st and 2nd team cricket, his top score was 21 and he laid the foundations of what was to come.

The following season Ollie started off playing 2nd team cricket he top-scored with 25 and 55 in 2 of the 3 games and earned his call-up to the 1st team.

Away at Chester County Offices with the team struggling on 28/4 Ollie hit a run a ball 62 against a strong bowling attack. It was a fine innings and one which caught everybody’s attention. Ollie played the rest of the year in the 1st team and his top score was 90 against Aston.

By the end of 2019 Ollie had scores 2 1st team centuries and was a key member of the first team batting order. Ollie scored 118 at Aston and 102no v Woodford. The Aston skipper described the 118 as one of the most brutal innings he had ever seen, and he said what stood out for him was the ovation he got from his teammates.

Sadly, due to Covid and Ollie’s illness, he played little cricket in 2020 but as soon as his treatment allowed, he would turn-out, his last game was on 26th September away at Lymm.

In 2017 Ollie won the Most Improved Player Award and in 2018 he won 1st Team Player of the Year Award. Ollie will be greatly missed, not only was he a fantastic cricketer but the most kind-hearted human being you could wish to meet. Nobody had a bad word to say about him, he had a heart of gold”.