It had been an exceedingly long time since a proper inter-club rugby contest had taken place at Priory Park, whilst we had welcomed Sheffield Tigers back in June, that match had been played out under the adapted laws, with no scrums or mauls. After four weeks of full-on training, Andy Appleyard and Rick Jones now had the squad ready to be tested, and once again they went up a notch to face National Two side Hull. The last time we had faced Hull was five years ago, when they were demoted out of National Two North to the North Premier; positions now reversed they returned a much stronger outfit. If size was to be a pre-match yardstick, then Hull already had their noses in front, featuring a very big set of forwards. Macclesfield had 22 players to call on during the 80 minutes with rolling substitutes being the agreed format.

It didn’t start well for Macclesfield, with less than 2 minutes on the clock Hull’s 10 fashioned an inch-perfect kick from his 22, over the on-rushing Macc defence, into the arms of his left winger, who took the ball at full speed on the half-way, wrong footing the defence to run in from 50 metres to score. On nine minutes another kick, this time from the Hull right wing, resulted in a score after he had chipped over the defence, hacked the ball on, and was just first to touch down.

The next dozen minutes saw Macclesfield pressing, keeping the ball phase after phase and after a quick penalty it looked as though Josh Redfern had scored, but the referee’s arm had gone up for a penalty for holding on to the ball. Macclesfield continued to look the slicker side, but botched lineouts from 5 metres let them down. Alex Davies, making his debut at 9, always looked sharp and nearly made the line from another quick penalty. The Macc Lads then strung a serious of quick passes together, getting the ball out to wing Lloyd Smith-Coates who brushed two would-be tacklers aside to score. 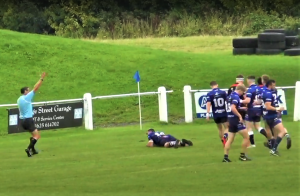 On 33 minutes we saw the first 50/20, as Tom Morton kicked the ball from his own half bouncing it into touch, inside the opposing 22, the new Law giving the throw into the attacking side. Macclesfield pressed for their second score, but Hull were saved by a forward pass. What followed was an old-fashioned forward fracas between two players, both being removed for the rest of the contest. Hull made a rare visit into the Macclesfield half, and from what appeared to be an innocuous position, hacked the bouncing ball through to score; at half-time it was 7-17. 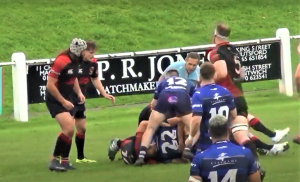 Josh Redfern goes over, try or no try!

In the second half, Hull brought back on their penalised pugilist and their dominance in the scrum earned them a close range try after creating a simple overlap. A rare fumble by Macclesfield gave the Hull 9 the opportunity to hack the ball on, which he collected for another gifted score.

The last quarter was all Macclesfield, wave after wave, deep in Hull’s half got the Macc lads close to a score, but a fumble and another lost lineout spurned their chances. A penalty in the Hull 22 created the last-chance, and Tom Jennings kicked for the 5-metre lineout. The correct call went to the industrious Josh Degroot, standing at two, ball secured, several of the backs joined the maul and for once the big Hull pack were splintering and going backwards, leaving a chasm for James Hampson to dive through. Jennings slotted the conversion for a final score of Macclesfield 14, Hull 31.

Whilst Hull were always in front, it had been a very competitive contest, Macclesfield had fronted up and matched the big burly Hull pack. Hull, also coached by Clive Griffiths, had defended well, but at times Macclesfield seemed to lack that extra cutting edge to get them deep over the gain line; that said there were 10 players missing, through injury and unavailability, that in normal circumstances, would most likely be in the starting line-up.

Speaking to Head Coach, Andy Appleyard, he had this to say about the match: “It was just what we wanted, seeing all the new boys in action, in a proper game was great, they did really well. It certainly identified a few things that we can work on with them. I was particularly impressed with young Alex Davies, playing his first game at this level; at 18 years of age, I was a little concerned with how he would cope physically, but he did brilliantly.

Thursday’s match at Bowden will be bolstered by the return of Sam Broster and Myles Hall, which should give Andy some more options in the backs. Kick-off is 7.00 pm; Bowden play in North One West, a level below Macclesfield, but make no mistake Bowden will be up for it, a Macclesfield scalp would be much prized. Get along, if you can, and give the lads your support, Bowden play at Clay Lane, Timperley.

There are several additions, soon to be announced, within the support coaching set-up, but for now it’s great to welcome George Edwards into the squad team. George, a long-time player and supporter at Macclesfield, joins as Logistics Manger, a role very similar to that of previous Team Managers – good luck George. 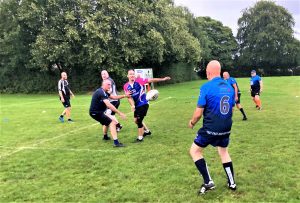 KEEPING TWO FEET ON THE GROUND!

That’s the challenge of Walking Rugby, walking as quick as you can whilst always keeping two feet on the ground (the definition of not running) – it’s not as easy as some people think!

Launched at Macclesfield Rugby Club 2/3 years ago, with the help of Sale Sharks, Walking Rugby has become a great success; Thursday nights, 7.00 – 8.00 pm sees a mixed bunch having some great sport and banter.

Walking Rugby stalwart and Cub Treasurer, Phil Ainsworth, had this to say about the game: “It is an inclusive team game open and accessible to all ages and abilities; it is aimed to give rugby playing opportunities for those who may have never played rugby before and those who played previously and cannot play anymore and want to re-engage with rugby. It is a slower-paced, non-contact, passing game, where tackles are made by a two-handed touch. There are no Scrums, Mauls, Rucks or line-outs, with restarts being just a simple ‘tap-and-pass’. The aim of the game is to participate, compete and most importantly enjoy the experience”.

Games are split into 15-minute quarters, so you can usually get your breath back. Refereed by Club Referee Jerry Frain, Yellow Cards are often brandished for a variety of misdemeanours, resulting in a minute’s rest on the side-lines. There is no charge to play, although players voluntarily chuck money into Mike Keeling’s ‘Tin of Joy’, which is helping to purchase new floodlighting on the top pitch.

Best of all it’s a great craic, a chance to chuck a rugby ball about, and a pie and a pint on Club night in the Sin Bin bar afterwards – why wouldn’t you? You don’t need an invitation, just turn up with your boots at 7.00 on a Thursday.