The long-awaited new season eventually started at Priory Park on Saturday afternoon. There had been several premature starts, but eventually the whistle blew to recommence rugby after a 17 month lay-off. Sadly we had two whistles before kick-off, to signal a minute’s silence for the 13 members and friends that had passed away, during the Covid lockdown months.

We would start the season against Burnage Rugby Club, once an old boys club, that has developed over the years to become a strong club in their community, with a 3G pitch and a 9-hole golf course, as well as the very popular Foot Golf, all providing a valuable income for the Rugby Club. This would be Burnage’s second visit to the North Premier, but as their Alikadoos feared, probably premature in their recent development. That said, they were a strong side used to winning, in the previous season; and coached by ex Macclesfield Player Coaches, Dave Muckalt and Chris Jones, they had some strong support behind them. 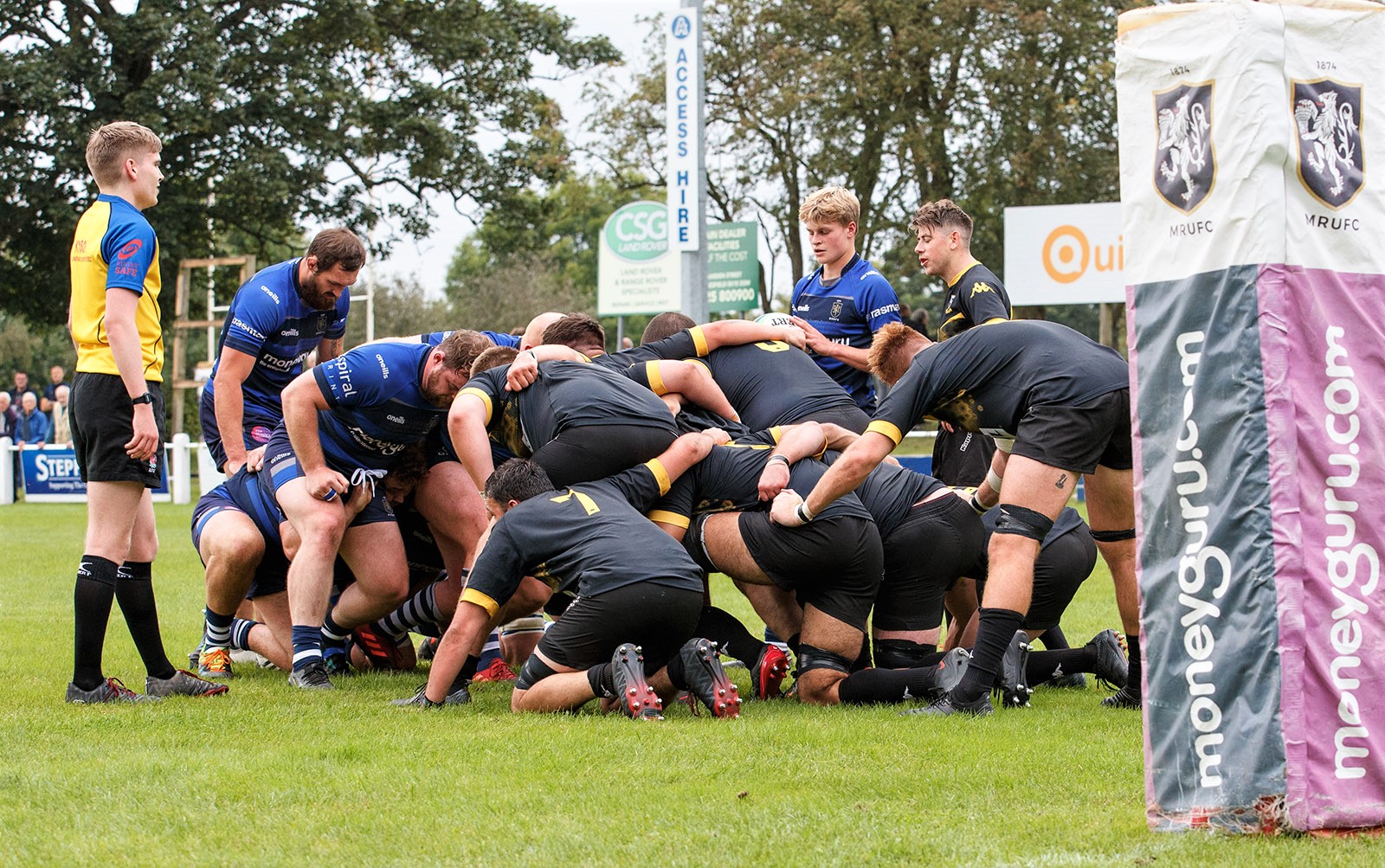 Macclesfield were solid in the scrum and defence

There was a noticeable gap in some skill sets, and the pace that Macclesfield played at put Burnage under a lot of pressure, but they took the chances that came their way scoring 3 tries, against Macclesfield’s 7. It has been a very long lay-off and both teams were still missing players. I would expect Burnage to take a fare few scalps, once they are up and running, particularly on their home 3G pitch. Head Coach, Andy Appleyard had this to say: “It was a strange game, particularly the 2nd half and we never really got out of second gear. The boys felt that the stop-start nature of the game aided Burnage, as it prevented us from driving the tempo. However, some really good areas of play executed from the training ground, one resulting in a try. Our defence again was very good, but we gave away too many penalties, which we will be looking at in detail, along with our kick-off retrieve”.

Elsewhere, Macclesfield’s other likely stiff competitors also won; Preston Grasshoppers hammered new-comers Northwich 77-0, who can’t now be relishing the visit of Macclesfield next weekend, Otley beat new-comers York 33-10 and Billingham beat Wirral 29-0. It is setting itself up to be another nail-biting season. 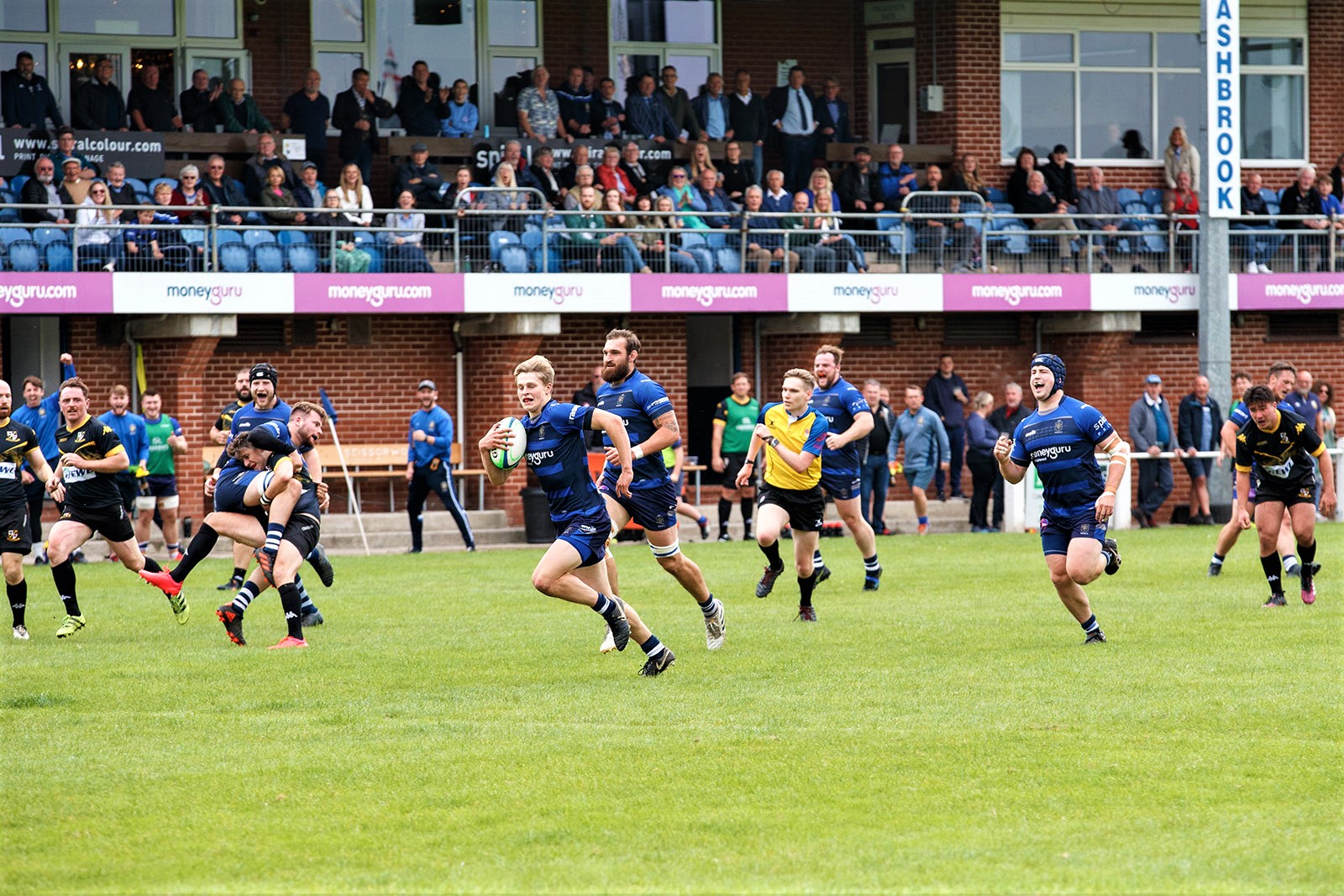 Alex Davies running in for his debut try

Competitive club rugby finally returned to Priory Park on Saturday as Macclesfield faced Burnage, a side who were sure to give Macclesfield the physical test they’ve been craving for the past 18 months. The ground was full of fans, the weather was perfect for rugby, and the stage was set for a great afternoon of sport.

Macclesfield’s energy and enthusiasm showed in the opening 10 minutes, keeping play almost entirely inside Burnage’s 22. This pressure was converted into points by Captain Tom Morton, who slotted a difficult penalty home from just behind the 10-metre line. The first try of the day came just 3 minutes later, as winger Myles Hall scored in the corner, capitalising on a Burnage defence that had been stretched thin by Macclesfield’s touchline-to-touchline phase rugby.

Macclesfield made it 15-0 after a lovely move saw flanker James Oliver collect a Sam Broster kick before drawing the last man and putting young scrum half Alex Davies through to finish under the sticks.

With the score standing at 15-3 after a penalty converted by Burnage fly-half Rhys Evans, a fight broke out between the two sides. Following a deliberate knee to the head, Macclesfield’s Jordan Simpson retaliated, escalating the situation. The Referee deemed both the original collision and Simpson’s reaction worthy of a red card, and the flanker was sent off along with Burnage’s winger Kier Merrick.

The match continued with both teams down to 14 men, and Davies bagged his second of the day from the resulting scrum at the restart, easily finishing from 5 metres out. Morton converted to put Macclesfield further ahead 22-3 going into half time.

The second half had the difficult task of living up to its predecessor, and while nothing as eventful as a double red card took place in the second 40 minutes, it did feature its fair share of tries. 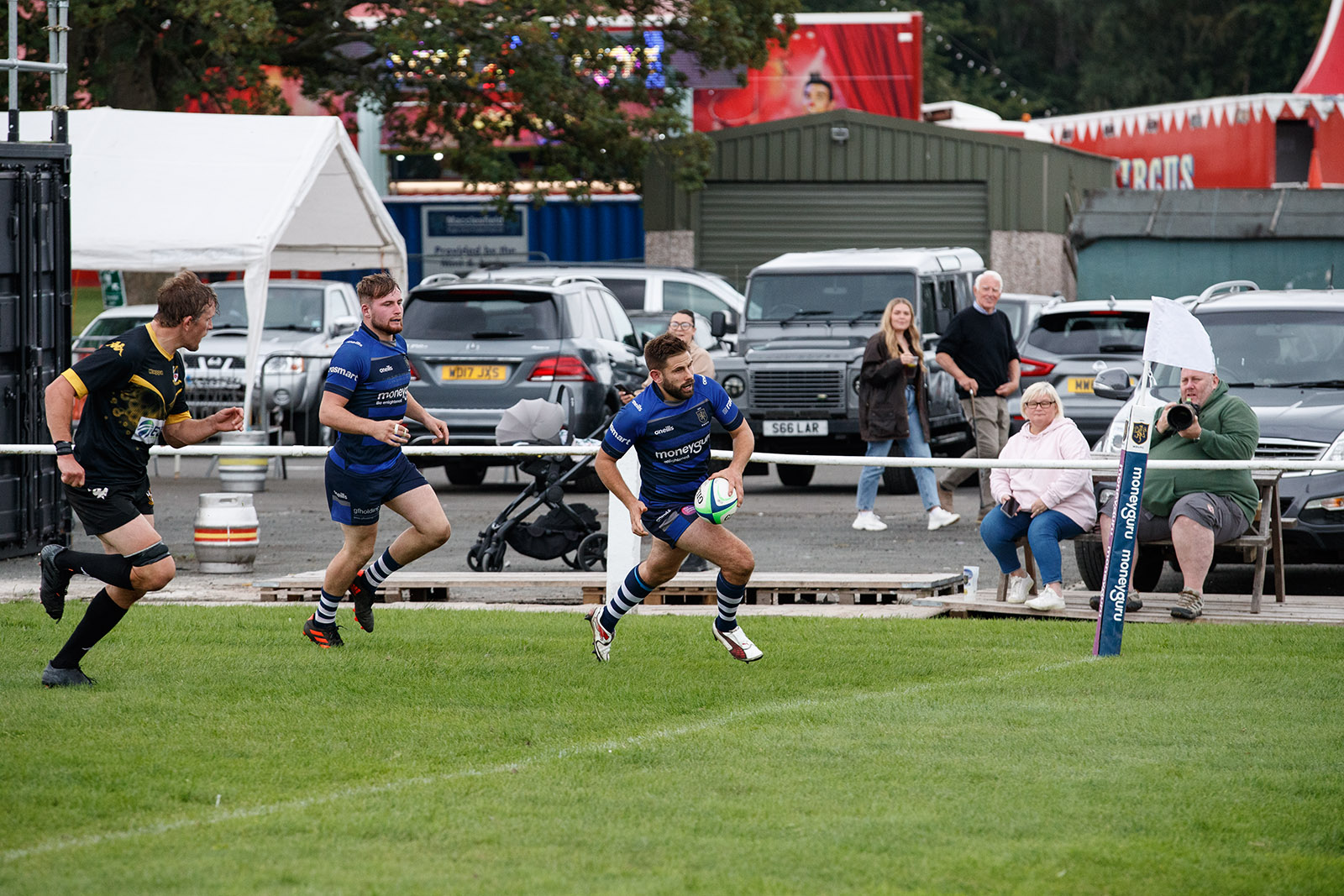 Myles Hall ghosting in for his second try

First to come was Burnage’s Josh Miller, who got on the end of an inside ball to finish under the posts, then Myles Hall added to Macclesfield’s lead, exploiting a mismatch by ghosting past a Burnage backrower. The big number, 8 Josh Redfern, then scored after picking up from the base of a 5-metre Macc scrum, before substitute Matt Thorp bagged himself a well-earned try. After a non-stop 20 minutes, the score was 41-10 to Macclesfield with 20 still to go. 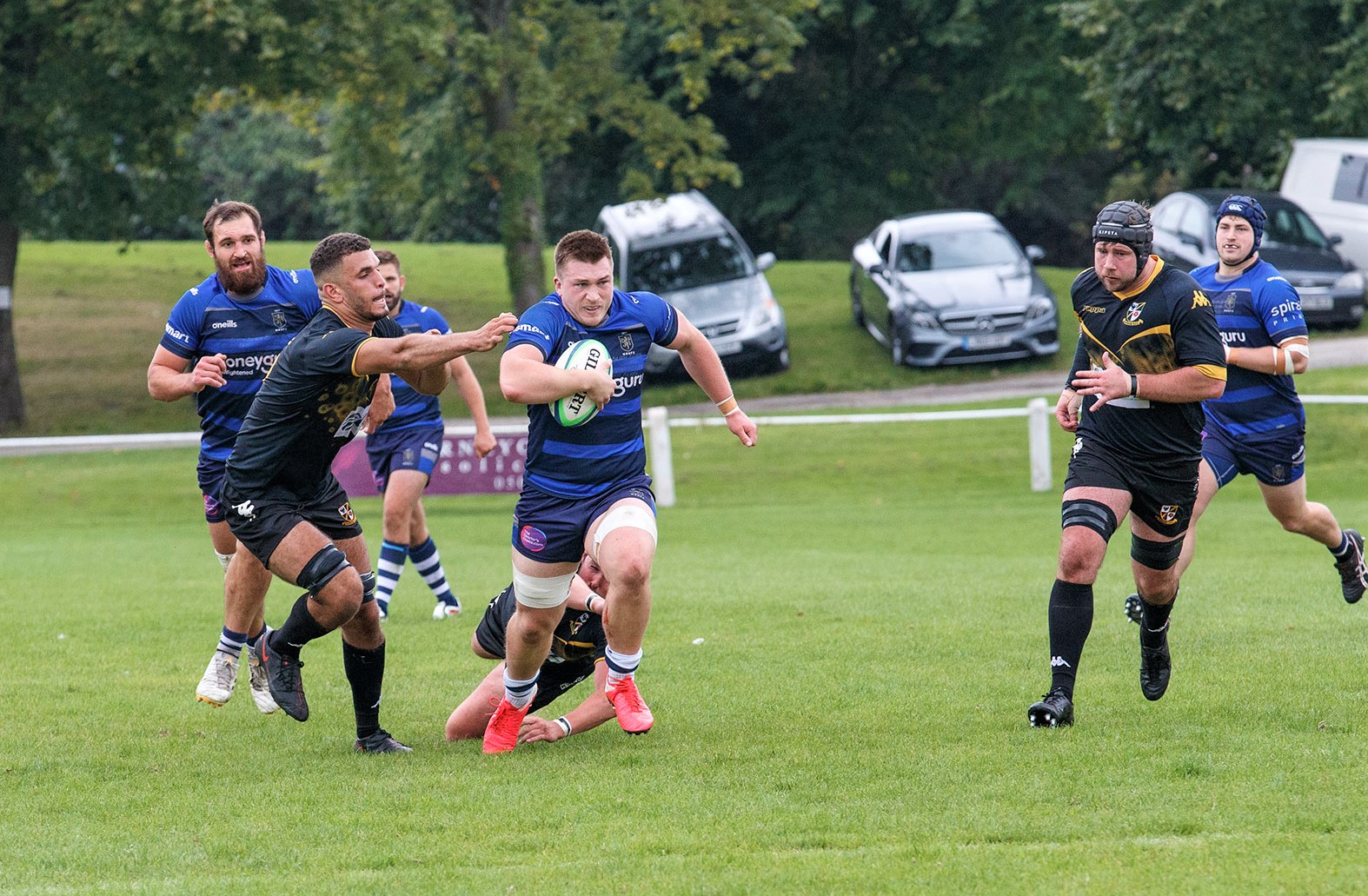 Matt Thorp on his way to the try line

Despite Man-of-the-match Redfern getting his second try, the final 20 minutes slightly let down the Macclesfield’s overall performance, with tired legs and sore heads leading to two further tries being conceded, and prop Aaron Wilman being sent to the sin bin for not retreating 10 metres.

However, considering the long hiatus from rugby and the anticipation of the season opener, Macclesfield looked sharp and focused for the majority of the 80 minutes, and the final score of 48-24 accurately reflects the team’s superiority over their opposition. The win capped off a great afternoon at Priory Park, the Macc supporters’ appetite for a competitive spectacle well and truly satisfied.

Elsewhere around the Club

The second team had a challenging game away at Chester, kicking off at 12.30. The squad was missing 12 players, through injuries and unavailability and sadly had to travel with only 14 players to fulfil the fixture. Many of last season’s Colts made up the number, and according to Coach Russ Tomlinson, all did a valiant job. It was always going to be a hiding-to-nothing, but the boys did well, getting points on the score-sheet. The final score was 71-19, but fingers crossed next week will be different with a full squad to take on Sedgley Park at home.

I spoke to the graduated Colts in the Sin Bin bar, on their return, and they were far from down-hearted, on the contrary they’d had had a great day playing ‘Senior Rugby’ for the first time – I can almost remember it! And, there were tales to tell; after the early kick-off they returned to the Club to help out their mates on the third team. With minutes to go, and Macclesfield loosing, Harry Marchington entered the fray for his second game of the day; receiving the ball for the first time, he ran in to score the winning try – you couldn’t make it up! 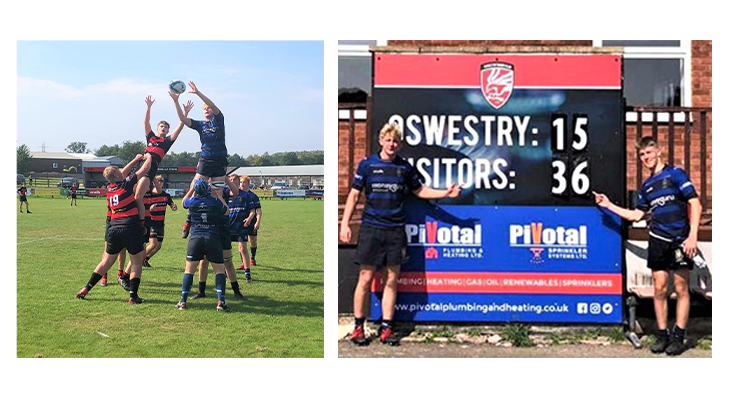 Matt Bowden reports on the Third team game.  First game of the season for Macc 3s and what a spectacle we were treated too. Luckily Aaron turned up just in time to add a bit of power to our pack and complete the front row with the Jones’ brothers. The game started at a frantic pace which suited our young guns. The half backs of Grant and Leicester were getting the back line firing, and some good tactical kicking put us in some great attacking positions. Great hands by the youngest Bowden and Hollywood put our wingers in ample space to attack the flanks. Briggsie managed to squeeze in to his U14 kit and tore up the right wing, whilst big Dave Kirk enjoyed a similar afternoon on the left, all safely covered by Duncan at fullback who never had a hair out of place; a very classy player.

Of course the backs couldn’t have enjoyed this possession without the hard work of the forwards. The silver fox, Ollie Wilson, looked stunning as he brushed back those years by sprinting around the park. Unfortunately his hammies didn’t have the same idea and went on strike with 20 minutes to go. Jonny ‘The Salmon’ Thompson put in a MOTM performance, both in attack and defence, closely followed by our skipper, Hodkinson, who we lost to a proper stinger early in the second half. With our skipper off and the bigger Jones’ brother having to leave the field due to injury we had to go to uncontested scrums. Down to 14 men for the final 20 minutes meant we had to put in a huge defensive display as Didsbury hammered our line. Huge hits by Gray, Robinson and Dempsey (after his 10 minute enforced break!) kept Didsbury from running away with it. With 2 minutes to go we were facing defeat. A cracking kick off from Leicester was ably collected by JT, and following a few hectic phases and powerful runs by Richardson, the fleet footed Marchington scampered over to seal the win. It was a thoroughly deserved victory from a young side with great potential. We would like to thank Didsbury for a great game, played in the proper spirit. Well done to all involved, it’s great to be back playing the game we all love. Final result Macclesfield 3rdXV 31 – Didsbury Toc H 2ndXV 27.

The Fourth team started their campaign away to Burnage 3rds, going down 34 – 15.

Next Saturday we visit Northwich, followed by Otley at home, for Super Saturday with the Food and Drinks Festival – book yourself in for lunch and a spectacular day of entertainment.