Northwich, along with Burnage and York were promoted into the North Premier league for this season back in May 2020, a worthy prize for previous results but, for some, not necessarily in their long-term plans. Leaping up a league is often a big challenge; indeed, Macclesfield has felt it in their yo-yo years in and out of National One. To be competitive will almost certainly require your squad to be bolstered, unless players are all on an upwards performance curve. During the long close-season, Macclesfield Rugby Club has been able to attract new players to strengthen the squad, as well as a natural progression of players within the Club. According to President Roger Blake, Northwich understood this was the strategy that they would need to employ, but the competitive nature of the game requires big incentives for players to move. Missing six regulars, the previous week against Preston Grasshoppers resulted in a 77-0 baptism-of-fire, and on Saturday they were still not back to full-strength. The long-term redevelopment of their main pitch was not quite complete, with the game being played on their second pitch. 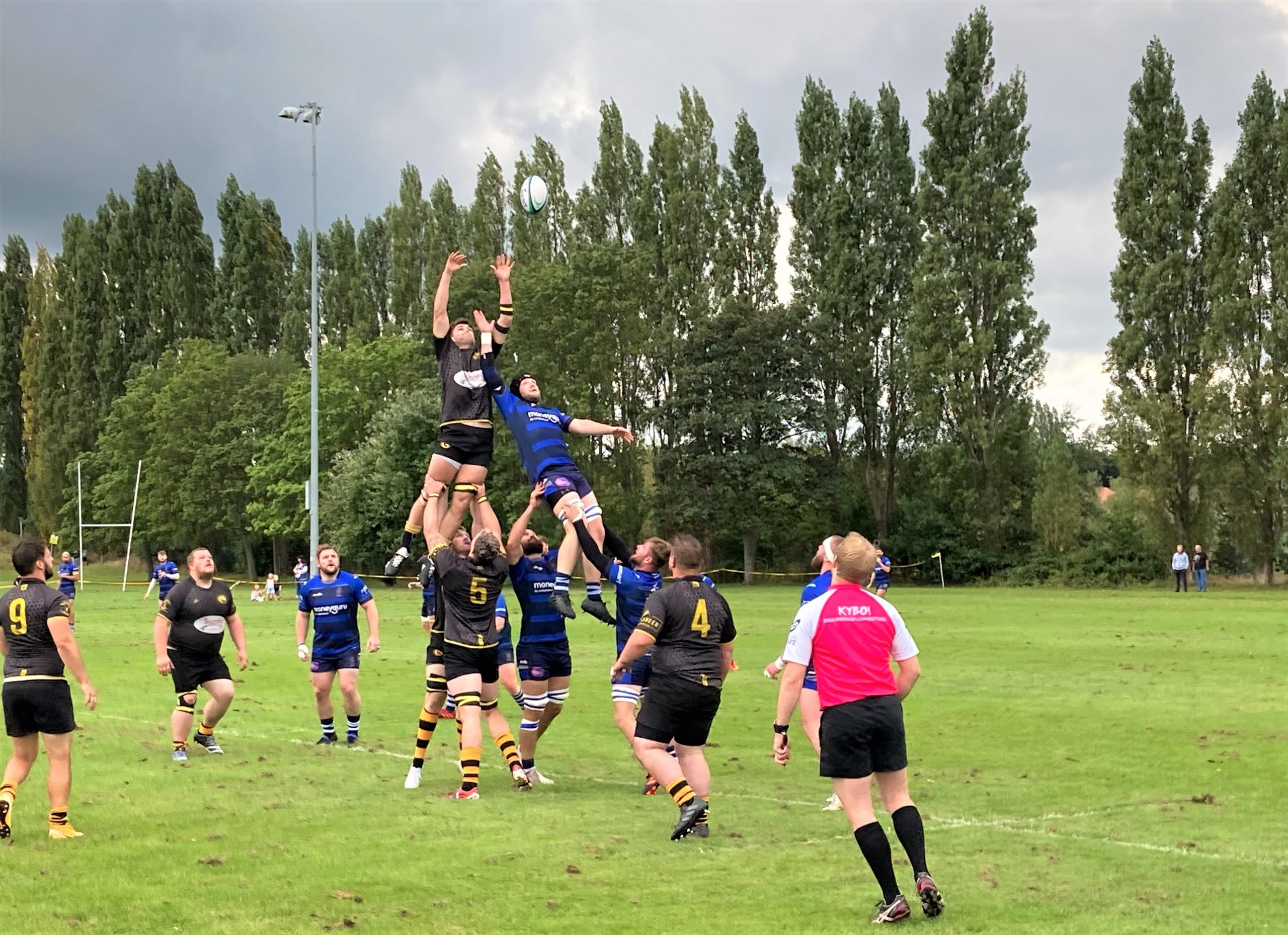 It was a competitive start to the contest with the big Northwich pack competing well in the set pieces, and the succession of penalties against Macclesfield giving them plenty of possession. However, Macclesfield’s well drilled defence gave little opportunity and speculative kicks were the launch-pad for Macclesfield attacks. The first score came from a hallmark cut-out pass by Captain Tom Morton to find the Oliver twins out wide, Harry giving his sibling James the scoring pass. Tries followed to Pete Milne, off a slick inside pass from Sam Broster and Harry Oliver dabbing down a grubber kick from his Skipper. Harry should have had another as he chased his own chip ahead touching the ball down a foot before the dead-ball line, however, much to the chagrin of the onlooking supporters, the referee, amidst the chasing melee of players, deemed the ball to have been grounded on the line! Sam Broster scored the final try before half time, with the score at 0 – 24. The penalty count against Macclesfield had been very high, and in other circumstances could have been costly. 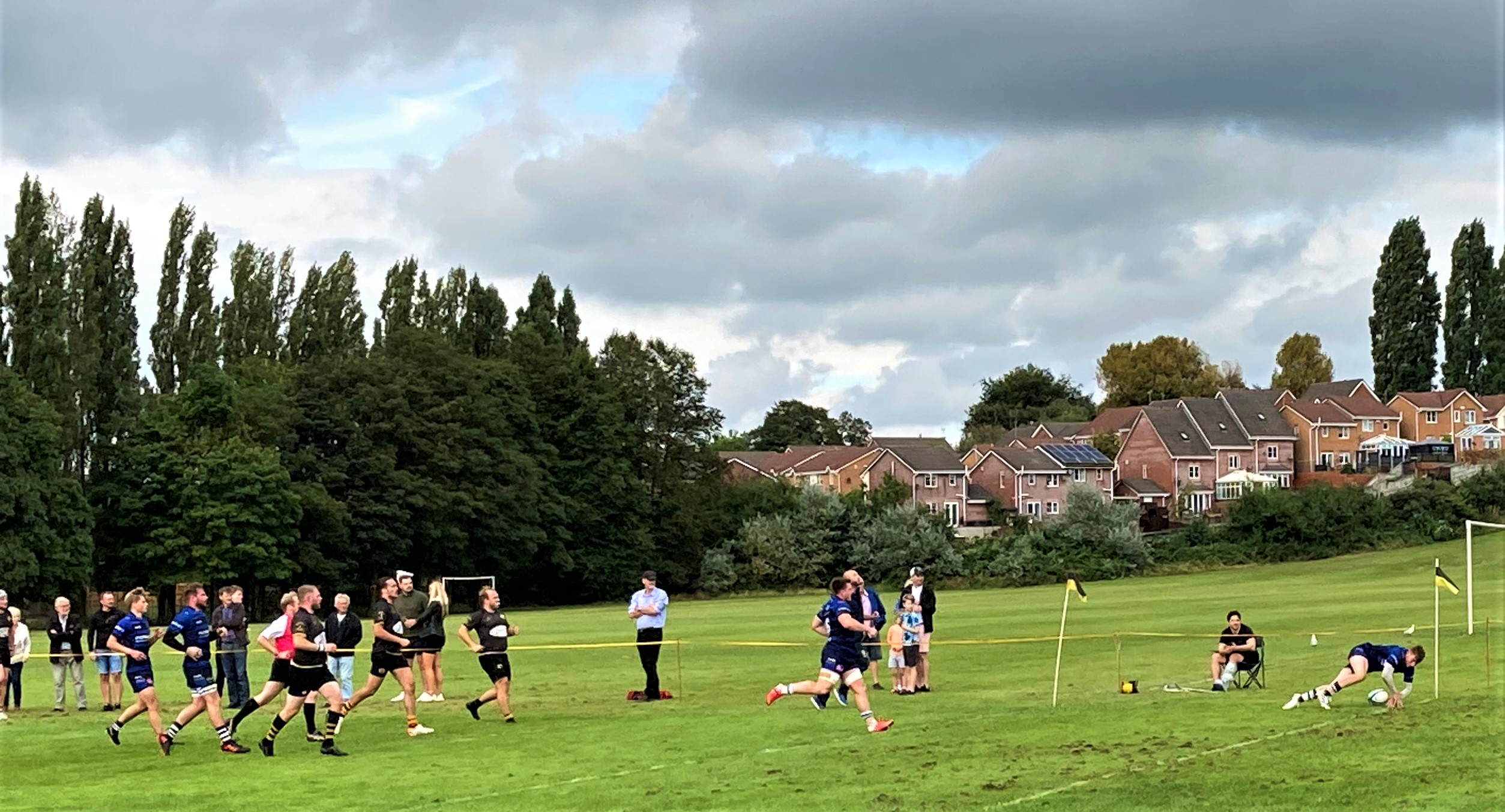 The second half started with an increase in tempo, Pete Milne making a break to set up Miles Hall for the first of his tries. A strong scrum from the restart allowed Tom Morton space to dummy, going through the gap to release Lloyd Smith Coates for his first. Harry Oliver was then forced to leave the field after what appeared to be an elbow to the eye. Northwich, attempting to relieve the pressure kicked deep, but on the edge of his 22, Miles Hall ran the ball back, beating two players before weaving around another three to score under the posts. 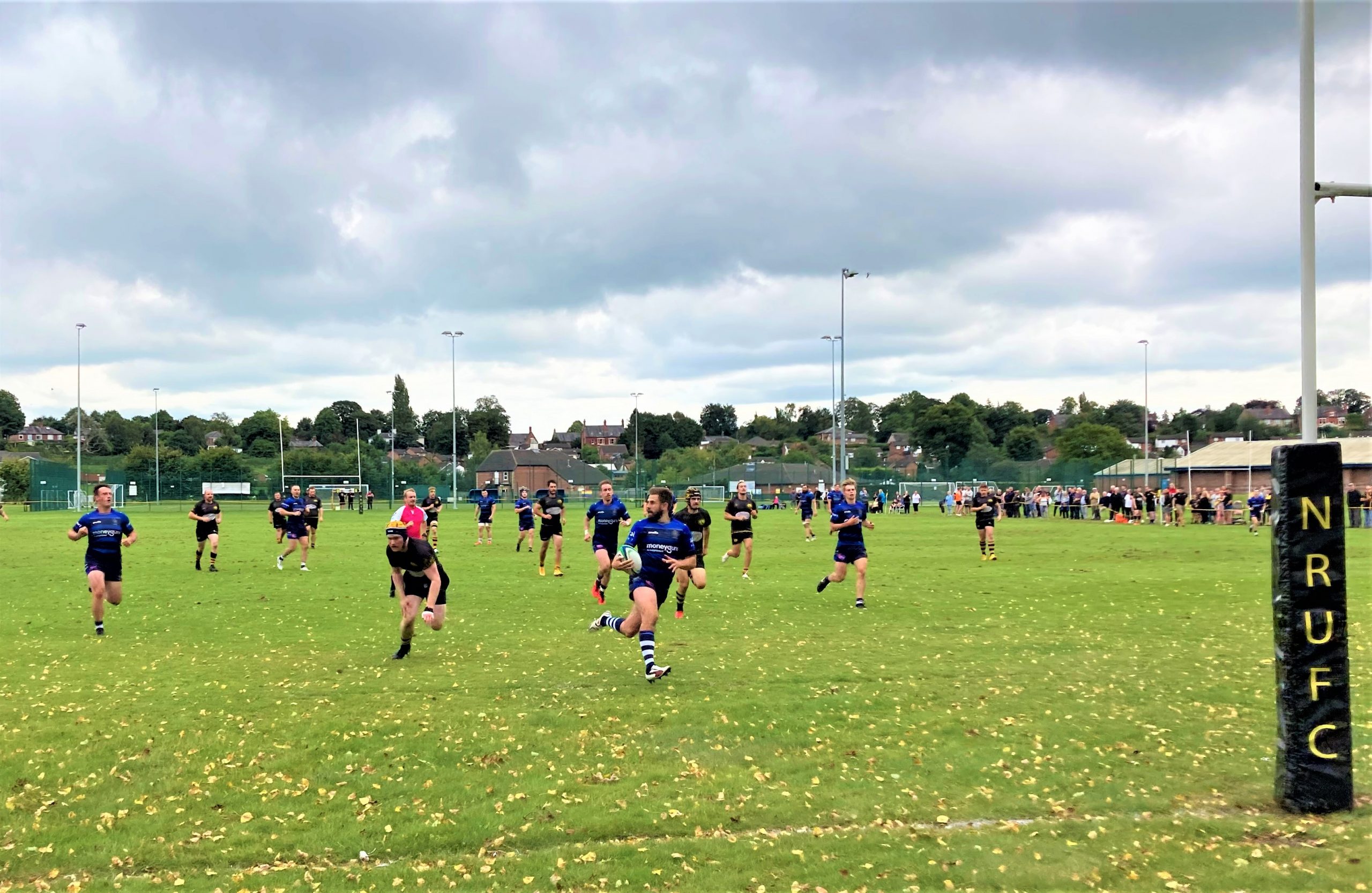 Myles Hall beats the last man for his second try

It was evident that even though there was still 25 minutes to go Northwich were tiring and Macclesfield were running everything. The attack again came from deep, ex-Marine Aaron Wilman was fed the ball with 60 metres to go, looking more like an outside centre than a tight-head prop, he easily beat the cover to charge to the line.

The finishers of Josh DeGroot, Dan Percival and Dan Martin had now joined the fray, with the latter bagging a try on debut. Dan still had a bit to do, beating two, as he darted over. Miles Hall quickly followed, receiving the ball with 60 metres to go he glided around would-be tacklers with a sensational piece of balanced running to score his hat-trick under the posts.

It was tough enough for Northwich, but as there 15 came back on to the pitch after being carded for “back-chat” their 10 was yellow carded for his third high tackle. 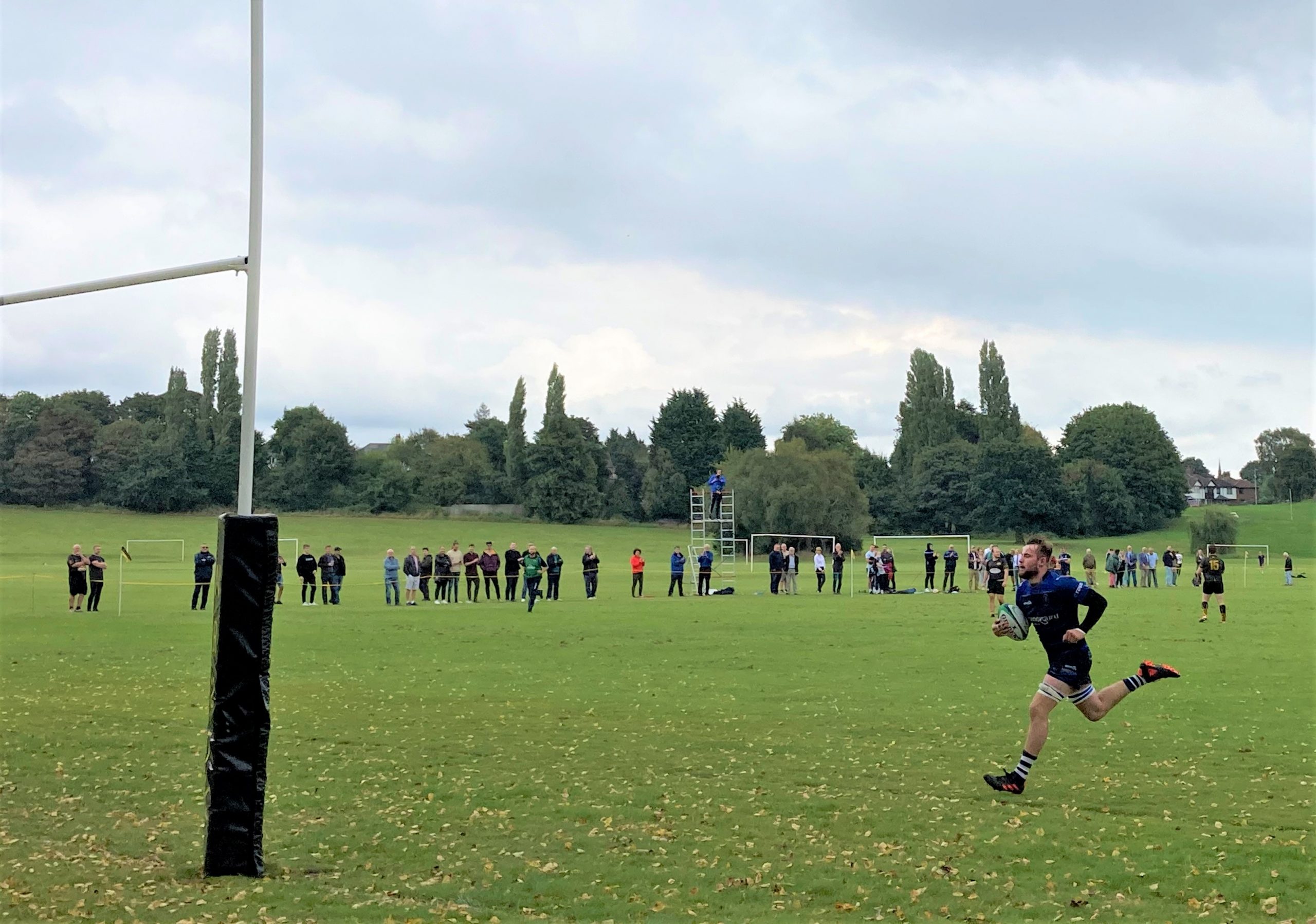 James Oliver shows his sprinting speed to score from distance

Determined to keep the ball alive Macclesfield quickly recycled the ball with James Oliver attacking from his own half, his speed was just too much for the opposition, powering away to go under the posts. Macclesfield proceeded to attack and with what looked like a certain try the home side were lucky not to go down to 13 after a deliberate knock-on. A lineout catch-and-drive on 5 metres was easily finished by Brendan Berry, now playing Hooker. Two more tries, in as many minutes would finish-off the game with sprint finishes for Alex Davies and Lloyd Smith Coates. 14 tries in-all had been scored with 10 conversions between Harry Oliver, Alex Davies and Dan Martin. 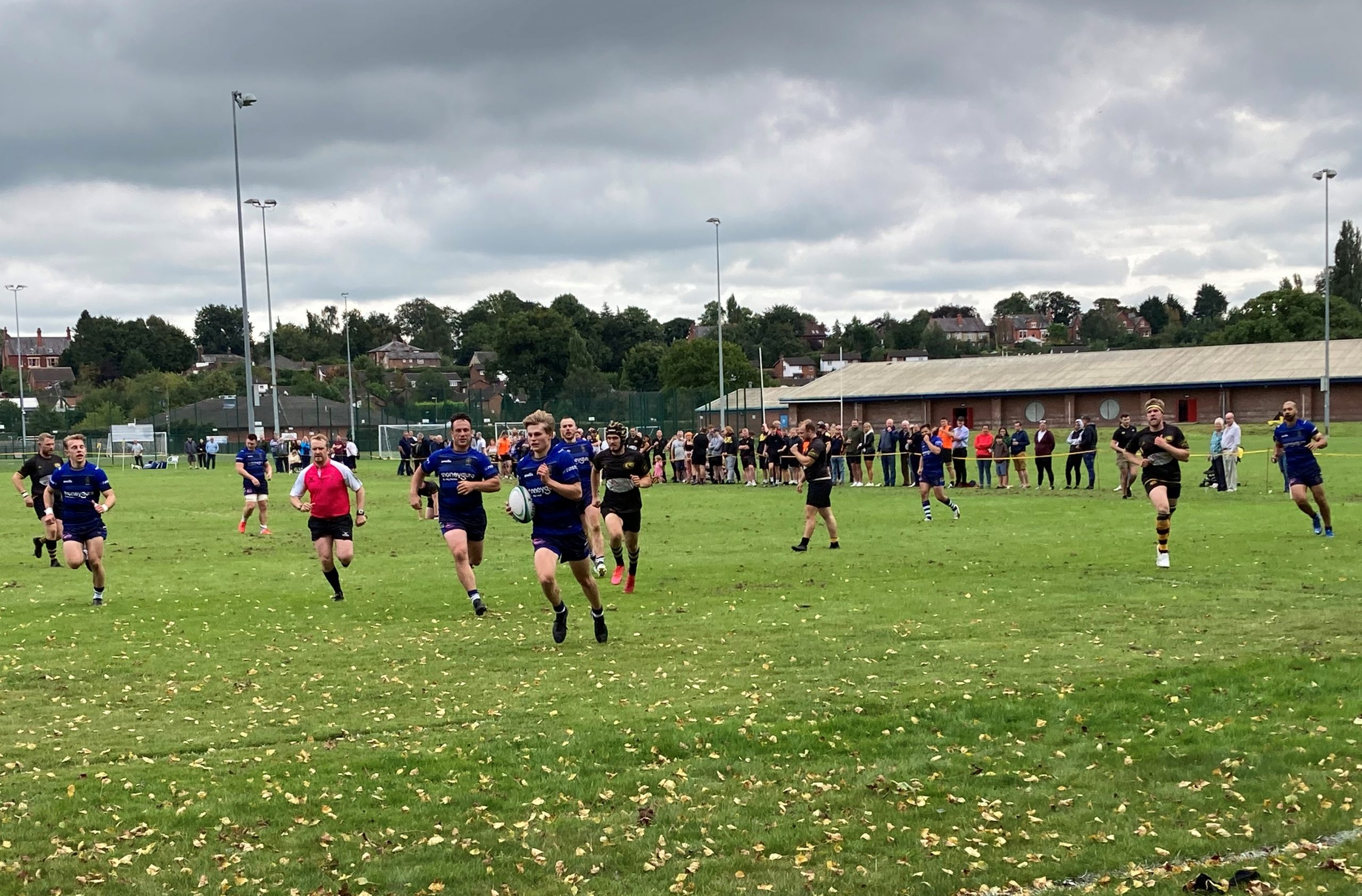 Head Coach, Andy Appleyard had this to say: “We were giving away too many penalties at the breakdown, at half time I reminded the boys about what we have been working on, getting there quickly, with the right numbers. In the second half we got it right and kept the pace of the game very high, which was difficult for the opposition to live with”. I asked Andy about next week’s big home game against Otley: “They won well against Preston, and we will be forced to make at least one change, as Harry Oliver will be out after concussion. But we have a big squad and players will get their chances”.

Whilst the opening fixtures have allowed to team to apply the game structure and strategy that they are developing, the Coaches would probably have hoped for a tougher test before they face Otley on Saturday. Otley will be, without doubt, one of the sternest tests for the squad this season and the most important home win to achieve, this side of Christmas – the boys will be hoping that the Priory Park faithful will be there in numbers on Saturday to shout them over the line. 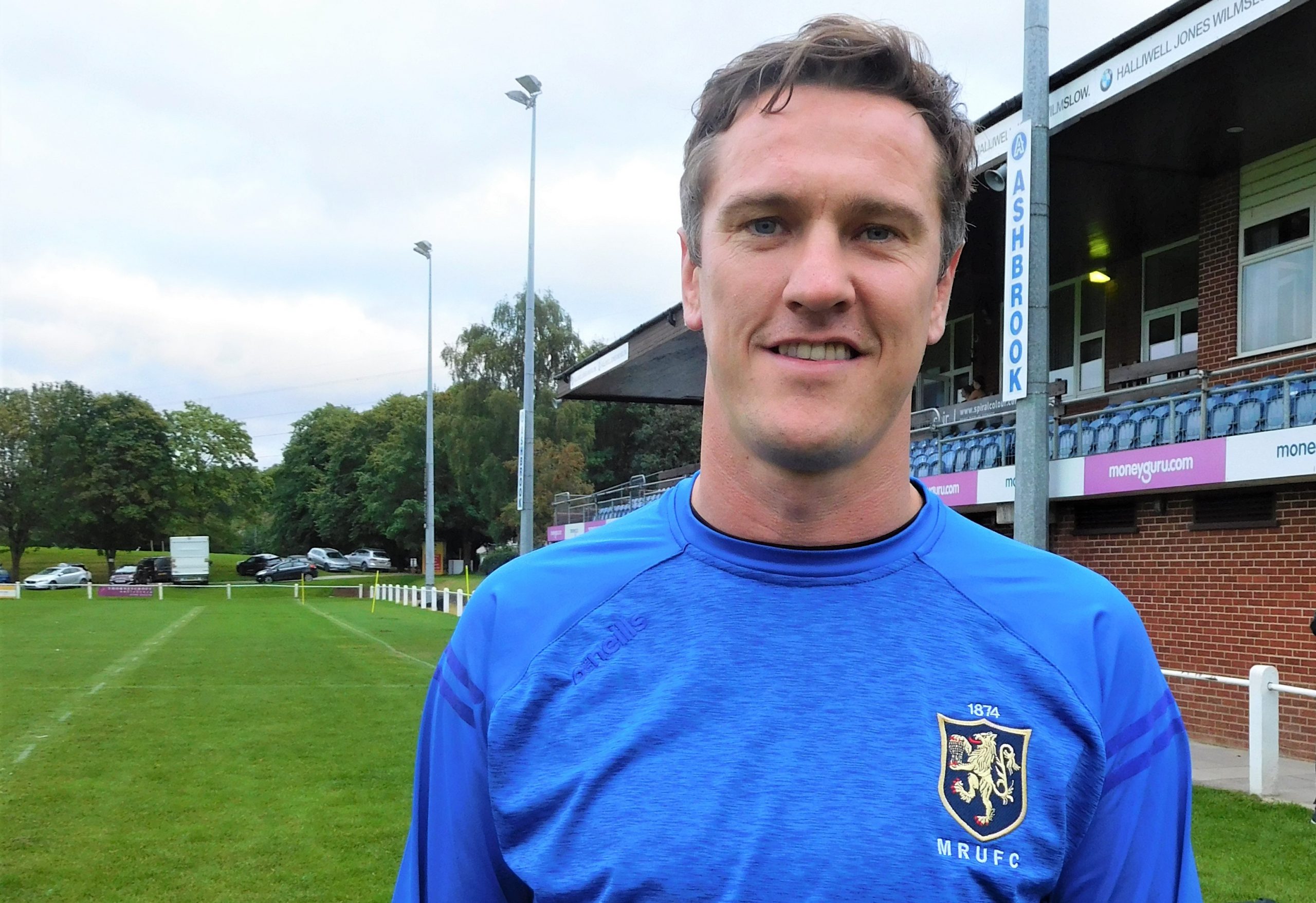 News from the coaching ground is that Ex England star Chris Jones has joined the team as a Consultant Coach. Previously with: Sale Sharks, Worcester Warriors and Leeds Carnegie, Chris will be concentrating particularly on lineout play. His international and Premiership experience is already being picked up by the players. Look out for the full story on the Club website.