Macclesfield’s 1st team took the tiring 138 mile coach trip, up to the North East, to play Billingham at the weekend. This was to be a significant game at this stage in the season, and a bonus point win could take Macclesfield up to 3rd in the table.

The Boys shook off the long drive and started the game at pace. It was clear from the start that the set piece was going well for the team. The scrummaging was impressive, all through the game and the Lineout was equally excellent.

From the kick-off Macclesfield exerted great pressure which forced three penalty scrums in the first 5 or 6 minutes of the game. Billingham managed to scramble their defence and eventually forced a turnover from Macclesfield, against the head. The home side went from defence to attack, threw the ball out to the backs who ran in the first try of the game to lead 5-0. Would Macclesfield regret not taking the points from an easy kicking position. 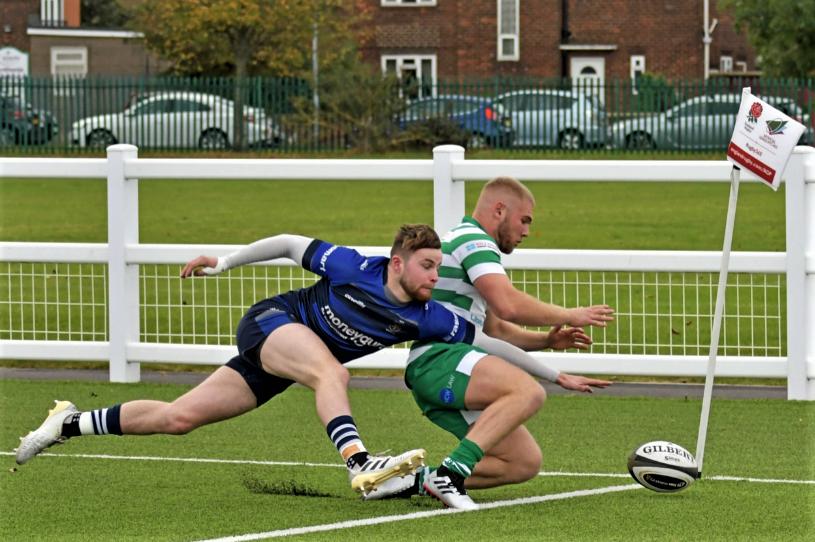 Try or no try, Harry Oliver thought not!

From a neutral point of view the game was really entertaining; with the Macclesfield scrum continuing to have the upper hand at the set piece. Both defences were tight but Billingham, through their fly half, Peter Evans, chipped the ball through the Macclesfield defence for team mate Ben Walton to chase through and score the second try of the game, the try converted and Macclesfield were 12-0 down after 13 minutes. It should be said that Peter Evans is both Captain and Head Coach and would be comfortable playing at least 3 levels higher.

From the restart the Macclesfield forwards dominated the play, picking and driving forward through several phases and sucking the Billingham defence in to create space for Matt Thorp to charge over the line to close the gap to 12-5. Macclesfield started to play with a little more confidence and were rewarded when a lack of discipline led to a yellow card against Billingham second row forward Nathan Myers. The Macclesfield forwards continued to dominate in and around the scrum, forcing Billingham back in to their own 22 and on to their 5metre line. Danny Martin at scrum half changed the play from right to left and back again until space was created out wide. A lovely pass from Sam Broster put Myles Hall over the line and a converted try levelled the score at 12-12 after 23mins. 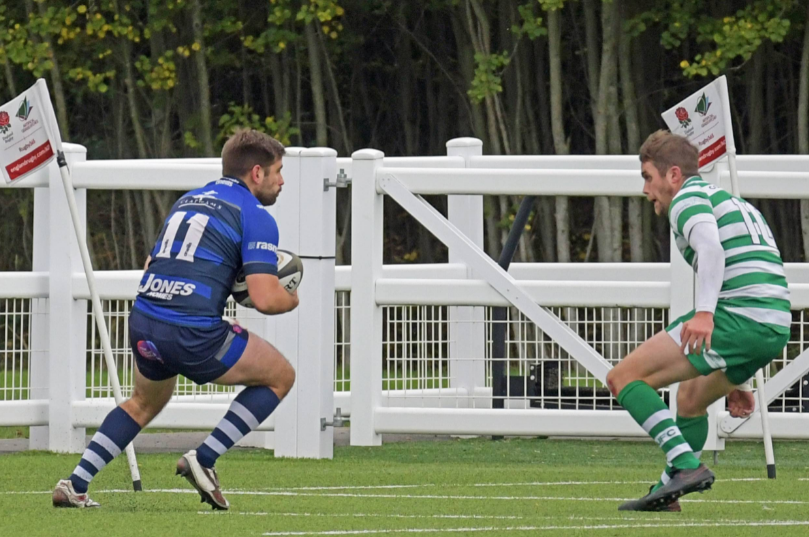 The game was physical and the defence on both sides was strong and determined. The crowd was now completely engaged in the game which went from end to end until Macclesfield won a penalty right on the half time whistle and went in 12-15 to the good. There was very little in it between the two teams although a little more creativity in the midfield and game management from Billingham fly half playmaker might have given Billingham the edge.

Macclesfield got just what they did not want from the kick-off in the second half. A missed catch put immediate pressure on the away side in their own hal,f and Billingham capitalised with a well scored try by Ben Wilson to put Billingham back in the lead by 17-15. 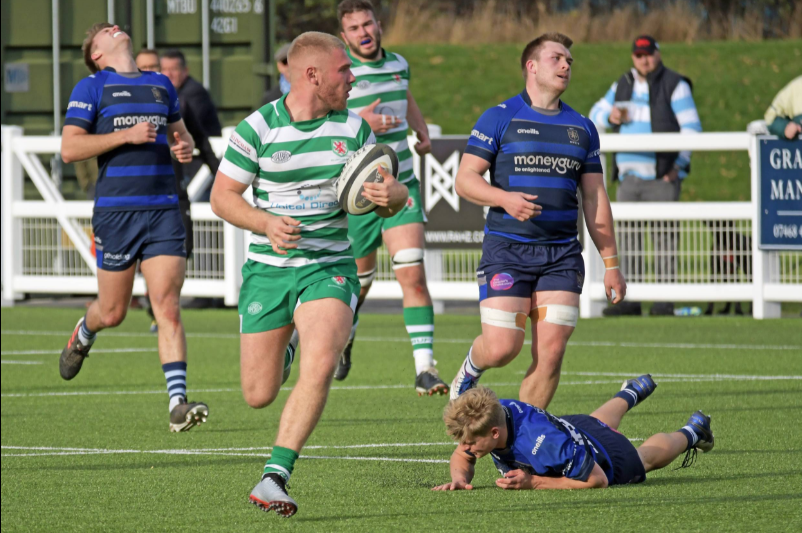 The outcome is evident for Billingham’s fourth

At this stage in the game Billingham seemed to have the edge. They were gaining more ground in the tackle and winning the battle in the midfield. Macclesfield seemed a little one dimensional in attack and found themselves under pressure inside their own 22. As the players began to tire discipline began to slip and penalties gave Billingham opportunities to keep the pressure on. Fortunately, Harry Oliver intercepted a try scoring pass and ran the ball back up the pitch and well in to the Billingham 22. Another penalty against Macclesfield which the kicker took full advantage of, led to another line out. The ball was won by Macclesfield on the turnover but confusion around the ball enabled Alfie Lawson to score under the posts for Billingham, to give them a 24-15 lead and a bonus-point try.

At this point Billingham were looking the stronger side. Their front row was carrying well and Macclesfield were forced back. The pressure was showing and an overlap created the space for Billingham to run in another quick try to take them further in to the lead at 29-15. A lack of discipline after the restart put Billingham ahead by 32-15 from another penalty with 7 minutes to go. 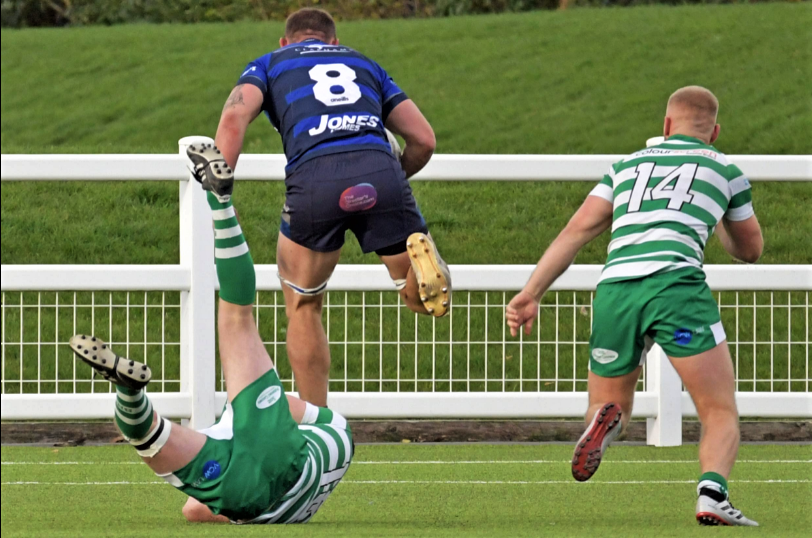 Macclesfield dug in from the restart and showed some of their determination to force their way in to the Billingham 22, where Josh Redfern, through grit and determination, scored a great individual try to end the game at 32-20.

As a neutral this was a very entertaining game to watch. The result was disappointing for Macclesfield who had begun so well but failed to convert time in the opposition’s red zone into points at the outset. The scrummaging and lineout were both very good. The game was lost in the midfield where Billingham were able to find ways to get behind the Macclesfield defence. Billingham play their 3G pitch very well, they are quite prepared to defend for the first half, and when the opposition tire of running on their artificial surface, take the advantage. Hopefully revenge will be sweet at Priory Park for the return.

Macclesfield look forward to welcoming Blackburn to Priory Park next Saturday. It will be another tough encounter; Blackburn has a much stronger squad, managing a 22-all draw on Saturday against Preston Grasshoppers. Please come and give your support, the boys revel in the noise of the Priory Park faithful, and why not book in for lunch before-hand, all details on the Club website.

Any fourth team, facing up to a Club’s first team, is always going to be a tough call, and the Peak District table-topping team was just that. Terry Robson reports on how the game unfolded.

Macclesfield started the afternoon like a runaway train, they scored three first half tries, two by Kevin Pike, the second being a very well taken effort, bursting through four tackles for his touchdown. Winger John Plant scored the third following a fine team effort, a powerful rolling maul, making the actual falling over the line a formality; Ollie Wilson kicked two of the conversions.

Hope Valley is unbeaten, and top of the league; their record illustrates them being an excellent second half side, as most of their victories having come from being in arrears at the break, as their youthfulness and fitness, usually provides too much for age and experience.

Hope opted for unopposed scrums following the turn-around, their aging prop retired and they came without a front row replacement, this often confuses players and takes a great deal of competitiveness out of the encounter.  Macc compounded the situation by conceding two tries with fatal mistakes and gradually the impetus swung.  The visitors monopolised possession and crossed the white line five times making the score-line look very one sided.

Captain, Jeremy Bostock, did his best to stem the tide; he brought on two props from the substitutes bench, Jason Walker and Geoff Chan, to stiffen up the strength of the forwards.  Also Andrew Foster at scrum half altered the point of the attack and ‘Mad-Dog’ Downes coming into the fray.  These changes could do little to effect the youngsters, who had their tails-up, and were able to continue to monopolise the scoring.

As Bostock always says, forwards win games, although the tackle count was high, Pete Hardwick and Paul Smith at position 12 and 13 kept thwarting midfield attacks, but recycled ball meant the 4ths were starved of the ball for long periods.

The team were not too downhearted by the result, but the atmosphere in the dressing room was, somewhat, subdued. After previously enjoying two victories, it will have been difficult to endure a poor half of rugby that led to defeat, but things like this have to be accepted – they will know that they do need to irradiate silly errors.

Bostock is always positive and reminded the side of their good first half.  He’s not a skipper to point the finger at individuals’ lack of concentration.  Next week they take on Stockport away from home, hoping the malaise of the second half will be well and truly out of the system.  They will be looking for a triumphant return to winning ways. Their leader saying that the team is very good, but needs to maintain their level of performance for the entire 80 minutes, any relaxations will definitely get punished.