Between the RFU and the regional leagues there are many fallow fixture weekends in this return to rugby season. Some of this is intended to ease players back into the rigors of combative rugby, which may or may not be working. What it doesn’t take into account of, is the effect on community clubs’ revenue streams. Many rugby clubs have teetered through Covid, barely hanging-on, and now struggling to pay-off overdrafts. We are only two months into the season and Macclesfield has already had two Saturdays without any rugby at Priory Park. Looking at the 2nd team’s fixture list, it would seem to have the opposite effect to easing players back into the game, as there are huge gaps without fixtures, with 12 of the 34 Saturdays without a game.

Although there was no first team rugby to be seen on Saturday, it was a massive weekend for the egg-shaped-ball-game! All of the 6 Nations teams had autumn international matches as well as England and Wales Women, plus a full Premiership round of fixtures. Both England teams did very well; the ladies followed up their win the previous week over New Zealand’s Black Fearns, with another emphatic victory, 56 -15. Combined with the previous week’s win puts a gross score of 99 – 27. The Black Fearns lack of rugby was painfully obvious, at times they were completely disorganised, however, they still managed to score three tries out wide on Saturday; a fact that will not have gone unnoticed by Head Coach, Simon Middleton; leaking three tries, next year, could cost England the World Cup.

England’s men took on Tonga, supported by a crowd of 81,000 at a joyful Twickenham. Tonga was strengthened with the return of 10 of their internationals after a mauling the previous week at Murrayfield. The bolstering of their team made little difference, as England was dominant in every department; Tonga did remain competitive until the last 10 minutes when England became rampant, their superior fitness combined with some silky skills creating a final flurry of points. Captain Owen Farrell had been withdrawn from the squad, after testing positive for Covid19; however, subsequent examination has resulted in the test being declared a false-positive; Farrell rejoins the squad for Saturday’s contest against Australia.

The results of the other international fixtures finished pretty-much as expected, although Scotland’s 15 – 13 win over Australia was not one expected by many of the pundits.

After Macclesfield’s last-gasp defeat by Blackburn the coaching team have had much to examine; Analyst Matt Coleridge will have been scouring the match video with a scrutinous eye! As there was no game on Saturday, the lads were given Tuesday off, to figuratively lick-their-wounds, before Thursday’s session. I spoke to Head Coach Andy Appleyard about the aftermath of Blackburn and Saturday’s game against Lymm: “Before Thursday’s session we showed the lads a video from the game, a bit of a reflection of what went wrong, the penalties that we gave away, and the defensive mistakes. The stats showed that we gave away 17 penalties – that’s twice as many as we see as being acceptable. That many penalties means that you’re already playing the game on the back foot, there were also far too many missed tackles”. As Andy put it: “..it was a really bad day at the office in regard to discipline and defence”.

Following the ‘home-truths’ video the lads were put through their paces, in a very tough defensive, tackling session: “We told them, it’s going to be hard, and we put them under a lot of pressure,  made them fatigued and then think about making the right tackle in the right situation”. Andy says what then followed was a session about the lads refocusing on our culture, what we all agreed upon two years ago, making ourselves become better as people so that we can become even better rugby players: “We will continue on our defence for the next two sessions, as well as kick-off receives, the lads know our defence structures are great, but that still depends upon one-on-one tackles being made, we don’t have a problem scoring tries, but we must stop the opposition doing it to us. It all sounds a bit negative, but it wasn’t, the lads really bought into what needs to be done”.

Besides some of the frailties that were found out during the Blackburn game, the big issue for the squad is that of injuries and availability. Both Alex and Will Davies are now concentrating on their university rugby, for at least the immediate future; and Scrum Half Sam Stelmaszek is likely to be out for another 4 weeks, and there is little prospect of a speedy return for Tom Morton. On the bright side with Billy Robinson and Aaron Wilman either side of Sam Moss, and Josh DeGroot and Harry Harding in the engine room, we have a very powerful front five, with plenty of players fighting for places in the back-row. 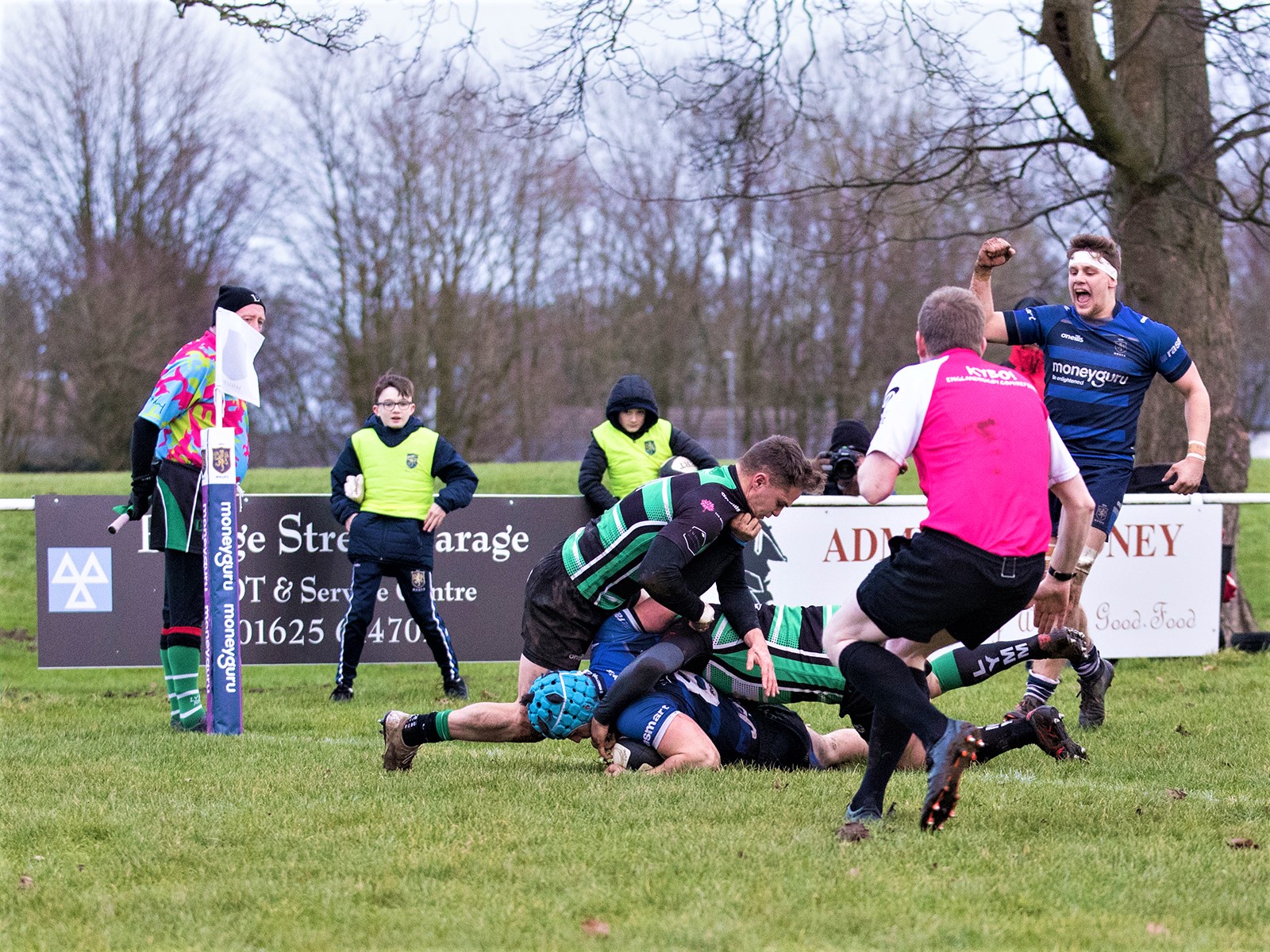 Saturday’s fixture at Lymm kicks-off at 2.15 on their RFU artificial surface. Lymm sit just one point behind Macclesfield and will be relishing the challenge, against their local visitors and looking for a reversal of their 27-15 defeat at Priory Park last season. Get yourselves along to Crouchley Lane to support the lads, which promises to be another very competitive contest – expect some big tackles.

Macclesfield 4ths march on to a quarter final

This was a match rather like the weather, often dour, serious and uninspiring interspersed with coruscating brilliance and occasional hilarious moments.

The amusement was best provided by Paul Smith and Kevin Pike.  Paul spent a lot of time in the first half chipping away at the match official pointing out how he differed with the referee on points of interpretation of the Laws of Rugby.

On the stroke of the mid-match interval he received a stern public rebuke, being told to “button-it” during the second period or suffer the ignominy of watching the game from the touch line for 10 minutes.

Paul Smith is no stranger, over the seasons, to seeing yellow cards. This term alone he has personally had four periods in the sin bin, as many as the whole of the rest of the team. Will he mend his modus operandi – highly doubtful!

The second funny moment involved flanker Kevin Pike.  Having suffered the insult of a slap in the face, he invited his aggressor onto the side of the pitch to discuss the matter further. Skipper Jeremy Bostock insisted that the conversation was closed, and he should concentrate on the game, Kevin wasn’t so sure. It was noticeable, thereafter, that the visitor’s No 8 kept his distance from Macclesfield’s open side flanker.

The large crowd watching found both of these incidents delightful in enlivening the entertainment of the afternoon. 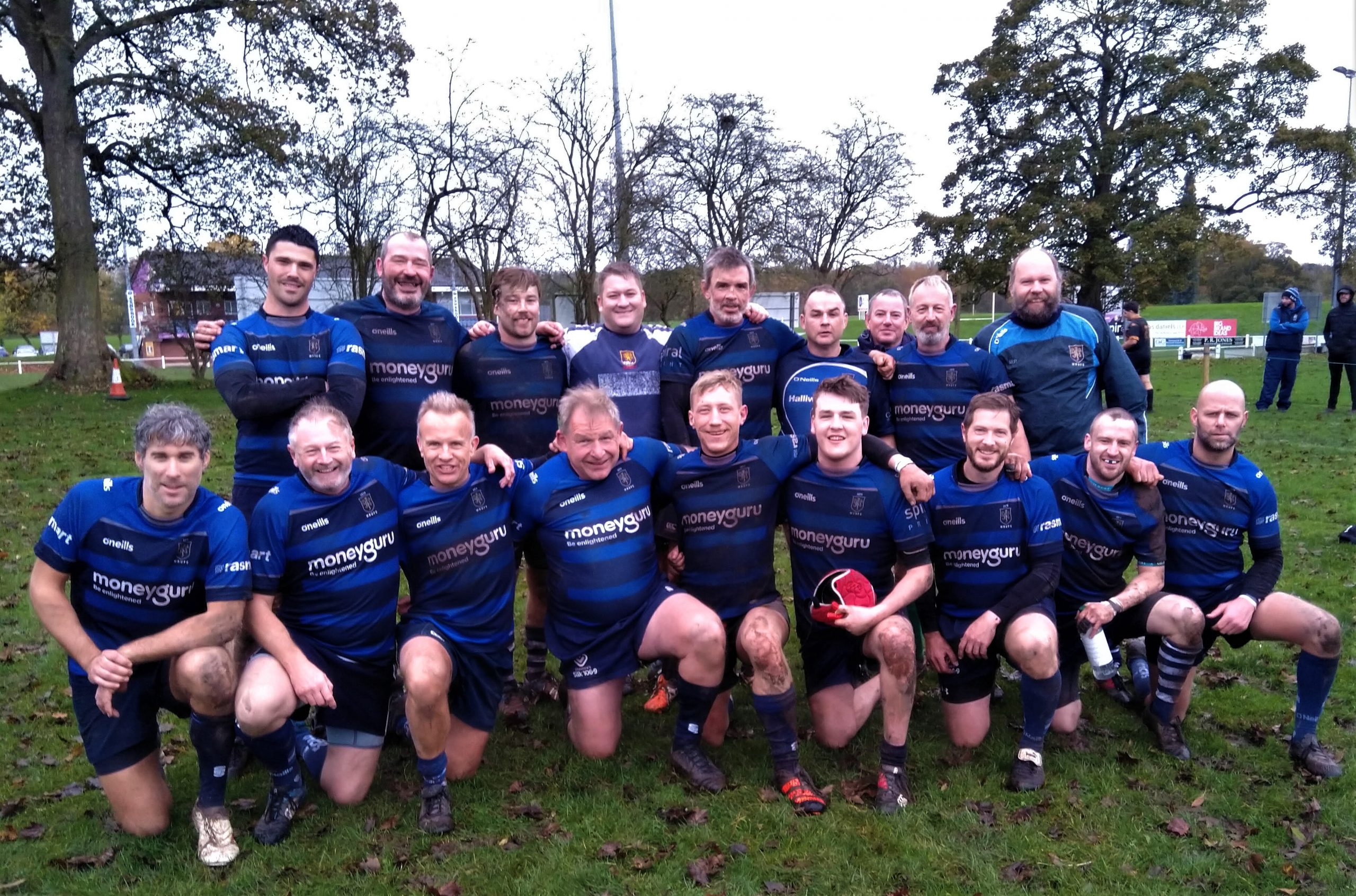 Macclesfield 4ths after beating Burnage in the Cup

The game itself seesawed with first Macclesfield leading, and then Burnage taking the advantage, before the home side eventually triumphed.  As this was the third round of the NOWIRUL Shield, they now progress into the quarter final to be played in the New Year versus Vale of Lune 3rd team.  It’s a full 10 years since they won this silverware when prop Jason Walker was captain; polo shirts celebrating this historic victory are still being worn by some of those players who participated that day in 2011.

Saturday’s win was illustrated by Pete Hardwick with a brace of tries. Until this season he was merely an occasional 4th teamer, now fortunately for the team he’s ever present. His speed, acceleration, deceptive running and subtle slight-of-hand were demonstrated advantageously in his scores. He was wonderful to watch, and further, his defensive game was very sound with a destructive tackle winning him this week’s Man of the Match.

Hardwick was teamed with Ollie Wilson in the centre, a new combination but highly effective.  They ran elusively with the ball, foraged for turnovers to set up wingers Nick Smith and Ryan Brown. The other Nick Smith in the side has now found his best position at full back. Last season he played at fly half but at the back he’s got more space to operate with and he’s worked hard on his high ball game. an essential part of any member of the back three.

Rick Hopkin exploited the new 50-22 kick effectively, twice bouncing the ball into touch in the defender’s 22, to gives the line out throw to Macclesfield.

In the forwards it was marvellous to see the welcome return of Scott Goodfellow. He’s been a spectator so far this season, but Saturday saw him back in his boots playing prop, rather out of position, but he certainly enjoying his game time; Bostock will undoubtedly want to keep Scotty in the fold.

At hooker Mike Dale was on for the first half until his tender ankle ligaments forced him to give way to Rufus Dixon.  These two display a different methodology to the dark arts of front row play but the substitution in no way weakened the scrummaging. Mike Broadbent propping on the tight-head made the front row a very solid unit.

In the boiler house Bostock and Matt Price won a good share of the line outs, and it was good to welcome Sam Jones, son of first team forwards coach Rick Jones, for a rare visit.  Sam possesses nous and aggression and was very active in the rucks and mauls.  Another debutant was try-scoring Nathan Sach, he had to work especially hard when Macc were reduced to 14 for the last minutes, when possibly the victory could have been snatched away, with Macclesfield only 6 points in the lead.

At the finish, everyone, spectators and players alike, retired highly satisfied, and birthday boy Jim Curtis on the first day of his seventh decade expressed his pleasure at the win.  He’s not intending to hang up his boots just yet; he still practises every week with the first team squad helping Club Head Coach Andy Appleyard. So the Scotsman is able to apply all of his experience of top class rugby in the direction of the 4th team on a Saturday.

Macclesfield have a week off next Saturday with no fixture, but the following week are away at Manchester Village Spartans, who play in Sale, and are top of the league, they’ll need to be on top of their game to come away with a win.