With the injury and availability disruptions at fly-half, Harry Oliver moved into the 10 slot to partner Alex Davies in his favoured position at 9; and after a long injury lay-off Billy Robinson started at tight head prop with Aaron Wilman to impact from the bench. Tom Brand moved into the second-row to replace the injured Josh DeGroot and James Oliver returned after his very harsh red card.

Blackburn were up for the challenge at Priory Park; whist they lost at Otley two weeks ago, the scores demonstrated that they were no push-over; and against Preston Grasshoppers last week a 22-all draw, was a good result. Last season Macclesfield had squeezed a 22 – 23 win at Blackburn and if anything Blackburn had started the stronger this season. 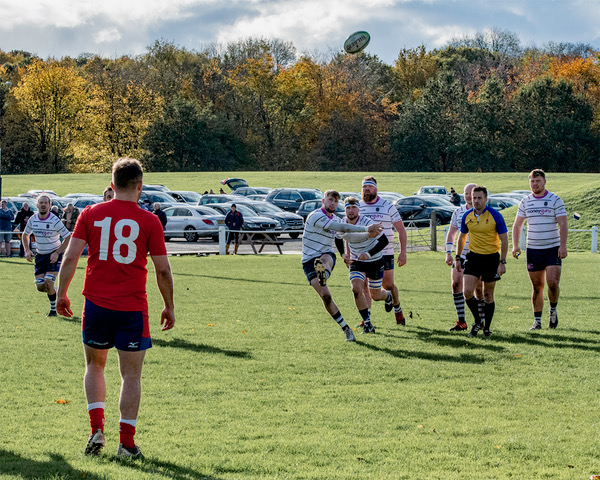 The game started with the wind behind the hosts, and they took advantage, pressurising the visitors, but spurned what looked like an overlap and then a kick at goal. Minutes later a scrum to Blackburn was put under so much pressure that their 6 tried to scoop the ball back with his hand, gifting an easy 3 points to Harry Oliver. Blackburn had a foray into the Macclesfield half, but the pressure was soon back on them, with a sweeping attack through the Macclesfield backs; the final try-scoring pass was slapped down with one hand, but Mr Morton only deemed it a scrum, elsewhere the referee could have been running under the sticks. From the scrum an infringement in the next tackle gave another easy 3 points for Harry Oliver. 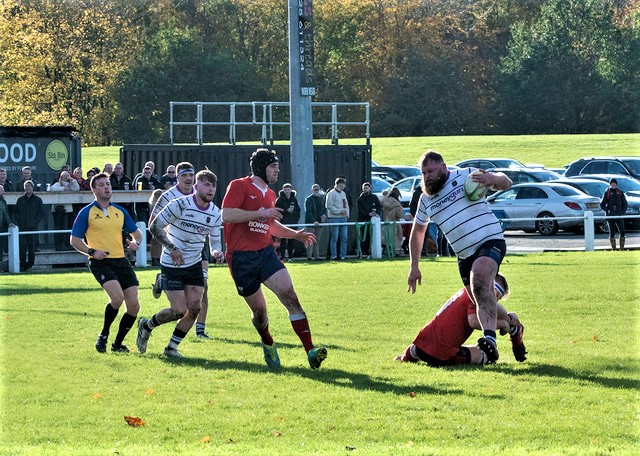 Billy Robinson on the charge

Macclesfield repulsed several attacks from Blackburn, before working their way deep into the opposition’s half. James Hampson, from full back, joined the line and an attempted cut-out pass to reach him, with a try-scoring overlap on the cards, was telegraphed by the Blackburn left wing, Leon Simpson; he had an empty field to run into, for the simplest of tries for a speedster. 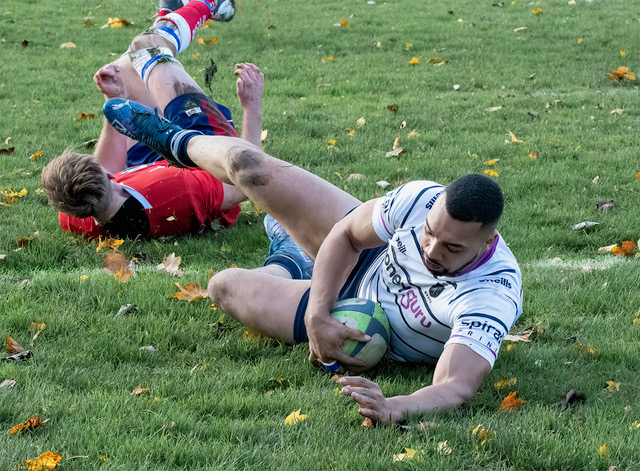 The response was immediate, from a lineout deep in the Blackburn half, Macclesfield set up a driving maul, before releasing Sam Broster who made another 50 metres, from a quick ruck, the ball was fed to Lloyd Smith-Coates, who rounded three forwards before beating his opposite number to score wide out. A mistake from the restart gave Blackburn the territory where Josh Redfern was yellow-carded for interfering with play on the ground. The subsequent penalty made it 11 – 10 at half-time. 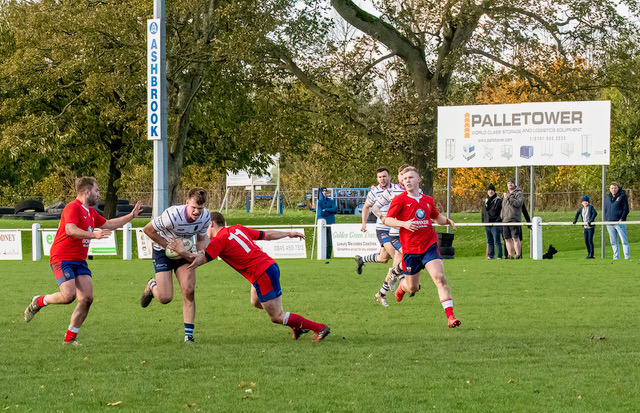 Harry Blackwell on the attack

The second half, against the wind, saw Macclesfield attack again from deep, the charging Billy Robinson drew cheers from the stand, before he fed Alex Davies, who took the ball into the 22; from here the 14 Macc Lads retained the ball for 15 phases before creating space for James Oliver to score on the left wing. The goal was complete and with the score at 18 – 10. Macc looked dominant. From the restart the dominance continued, Macclesfield made easy ground and were soon back in Blackburn’s 22, pressing for another score, but captain Sam Moss was left isolated, and the penalty would turn the game again. From the lineout in Blackburn’s half there were no alarm-bells ringing, but slick handling and the introduction of the full-back into the line, sent electric, Leon Simpson free again, to run un-molested to the try-line, making it 18 – 17.

A series of decisions went the way of the visitors as possession changed hands, up and down the pitch. Aaron Wilman was now permanently on for Dan Percival but playing in the unaccustomed loose-head position, that said, Macclesfield were rock-solid in the scrum. Blackburn worked the ball to their left wing which forced a seat-belt tackle, the penalty putting the visitors into the red-zone. The lineout maul seemed to have been checked, but the Blackburn heavy brigade spun around to the blind-side, for Hooker and Captain Tom Burtonwood to score; the visitors took the lead for the first time with 19 minutes to go. 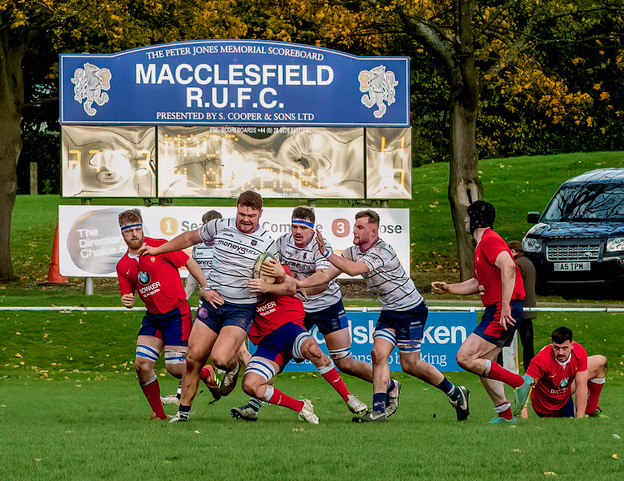 Harry Harding breaking out of defence

Macclesfield were on the charge again and it looked like Josh Redfern was about to score, but the opportunity was again thwarted as he was adjudged to have picked up the ball in an offside position. Leon Simpson was then sent to the bin for a high tackle and Macclesfield had a line-out in the red-zone. Josh Redfern again crossed the whitewash but was held-up; Macc returned the drop-out, and once again were in the red-zone with a lineout, the maul was perfect and Captain Sam Moss went over. The game was now nip-and-tuck, with 10 minutes to go Macc led 23 – 22.

Blackburn’s big second-row Jacob McHugh had been a handful all game and once again he broke tackles to reach the 22, until tackled by Phil Laing, who found himself on the wrong side; whilst he flattened himself to the ground, and the ball was easily playable, Mr Morton didn’t see it that way and it was an easy 3 points to retake the lead.

Macclesfield worked their way back into Blackburn’s 22, and from a ruck, scrum half Alex Davies spotted a gap, his electric acceleration put him between the posts for what appeared to be the game. The stand erupted and the players, with only a minute to go, thought that it was all over – but Mr Morton still had a minute and a half on his watch.

Blackburn won the restart and retained the ball through several phases, until the Macclesfield defensive line failed to get back in position, leaving a huge overlap. The result was academic, Blackburn would not spurn such a golden opportunity, the last man was drawn to make the tackle, and the overlap made it another easy run-in, for Leon Simpson’s hat-trick, the simple conversation would give them the 5 points, leaving Macclesfield the 2 point scraps.

Head Coach Andy Appleyard and Analyst Matt Coleridge will have two weeks to examine the video and the stats, before we play Lymm away. Both agree that while we played some very good rugby, scoring four good tries, it was spoiled by errors. Too many times we gave away penalties whilst in the opposition red-zone, wasting the investment of our attacking play. The same can be said in our defensive play; missed tackles ultimately disrupted our defence and created overlaps for scores. The team is still work-in-progress, and with the succession of injuries, there has been little consistency; added to which, the Coaches have yet to field their strongest 15. All these things can be ironed-out as we complete the first half of the season. On the positive side the return of Billy Robinson was better than expected, he played virtually the full 80 minutes, with one barn-storming trundle up the middle of the park; and once again, Alex Davies put in a MOTM performance.

Macclesfield 2nd XV travelled to Blackburn for their first game in 3 weeks in the Cotton Traders Premier Division. This was a bottom of the table clash and a must win for both teams. An accident on the motorway delayed and shortened Macclesfield’s team arrival and warm-up. After only 10 minutes of basic stretching and running about, the game kicked-off. Under dark storm clouds, interspersed with bright sunshine and a blustery wind the game commenced.

Macclesfield were almost immediately penalised for a number of stupid mistakes and lazy play. Captain for the day, Tom Jenkins, had to read the riot act, as his team gave penalty after penalty away. After 20 minutes, his team had warmed-up and the Captain stepped up to the mark to slot a penalty to open the scoring.

Strong forward running saw Blackburn score first try. As the game settled down Danny Kay, a veteran second row, drafted in for not only his first game of the season but his first game at prop, began to feel the pace. He valiantly played on after a series of big, hot tackles, that kept Macclesfield in the game. Immediately after half time Macclesfield, by now fully warmed-up, put together a set of plays where the ball was recycled more than 20 times. Their patience paid-off as a strong running Chris Gleave burst through a despairing tackle to glide over.

With the experienced Israeli international Tom Burden driving the pack forward, he and Elliot Alston drove Macclesfield forwards, again and again, to within centimetres of scoring. Another flowing move and significant sleight of hand saw the skipper touch-down. A disappointed Dan Martin, who was dropped following the 1st XV loss of the previous week, pushed, prodded and drove the team to the brink of scoring again and again.

Young blood was introduced when Zac Burden made his debut on the wing. He had an immediate impact beating the by now tiring Blackburn defence out wide. Kevin Pike moved from the wing to flanker where he and Sam Bancroft battled valiantly against wave after wave of Blackburn pressure. A truly veteran prop, Jim Curtis, was warned for his overly disruptive scrummaging, where Blackburn had used 4 different players in an attempt to master the master-of-front-row play. After tit for tat scoring Blackburn ran out winners with a late, but well worked, try leaving the score 22-15.

A disappointed captain, Tom Jenkins, said after the game: “With fewer, last second, cry-offs and a little more training we will turn it round, and we will get the results our performance deserves”.