If the weather the previous week at Rossendale was described as awful then the weather this week up at The Wirral was atrocious. It was freezing cold with driving wind and rain heading straight down the pitch. Many spectators chose to remain in the warmth of the clubhouse and watch the game through the large, floor to ceiling windows and within easy reach of a glass of wine or a beer.The pre-match lunch was attended by Colin Free, President of The Cheshire RFU who presented Volunteer awards to two Macclesfield volunteers, Matt Bowden and Phil Mason. These two, along with many other volunteers, represent the backbone of Macclesfield Rugby Club. The contribution made by the volunteers at the Club is huge and enables the Club to develop its facilities for the participation and enjoyment of rugby across all age grades, types and genders of the game in the community.

For the players trying to warm-up this was an important game; separated by just two places in the league and with the same number of wins the sides looked evenly matched, and both were determined to take the maximum five points away and stay in touch with the top sides as we go into the last few games before the Christmas break. The game was also played as the Cheshire Cup Quarter Final and the winner’s going through to a semi-final in February 2022 against Old Anselmians, currently running away with the North West Two league – it was a case of, winner-takes-all. 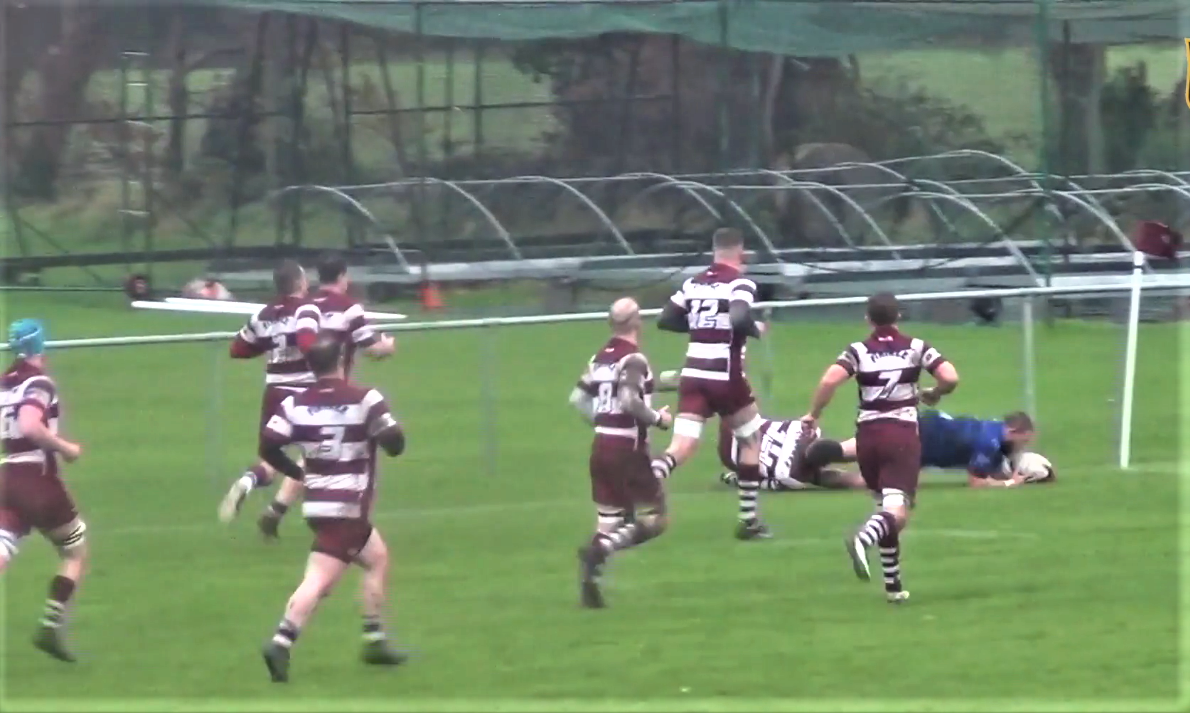 Macclesfield had lost three of their four previous games, two of them by just two points. The feeling in the camp was one of frustration because those games were all winnable; and there was steely determination to set the record straight. Macclesfield kicked off with the advantage of the driving wind and rain behind them. From the start they used the ball well, kicking for territory and forcing the opposition to play their way back against the weather. Early pressure from Macclesfield, particularly in the forwards led to a penalty which was converted by Harry Oliver inside two minutes to give Macclesfield a 0-3 lead. It was clear that the Macclesfield forwards had the advantage. They were stronger, more powerful and were managing the conditions well. Wirral kicked off and managed to play the ball close to the Macclesfield 22 area where a penalty was given to the home side. Wirral chose to tap-and-go but the Macclesfield defence was prepared, and came up fast. Josh Redfern, No.8, intercepted a pass inside his own half and ran like a gazelle the length of the pitch to score under the posts. Harry Oliver converted the try and Macclesfield were now 0 -10 to the good and with only about five minutes having been played. 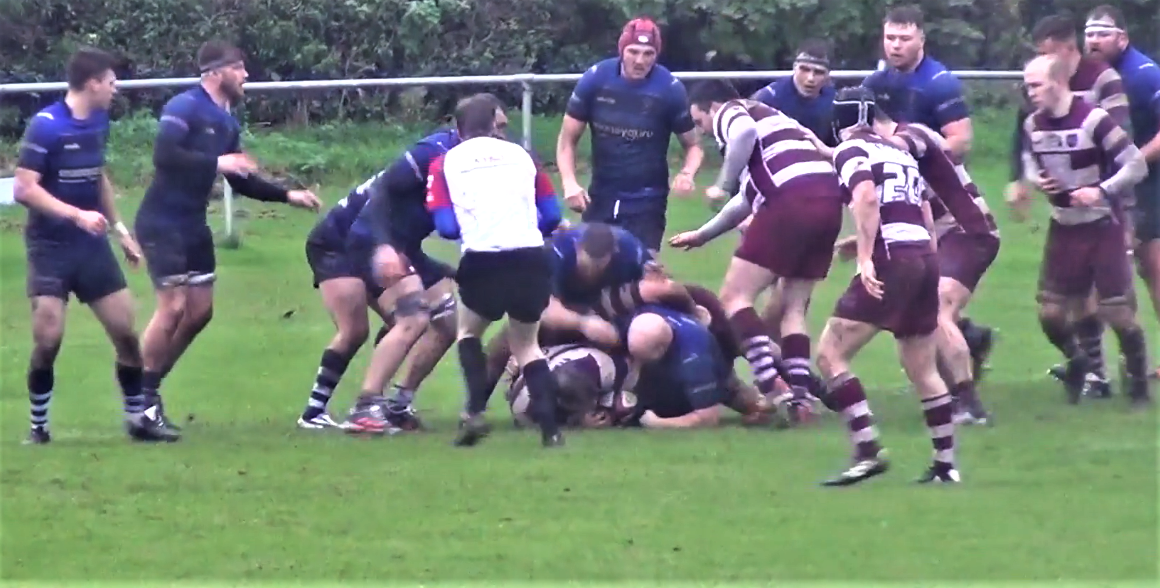 Despite the conditions the ball handling skills, from both sides, were good and although much of the game was kept tight within the forwards, working through the phases, there was some good running rugby to be seen. What a difference it makes for the back row and the scrum half when the pack is driving forward! Last week following a forced substitution the forwards lost their advantage and it made life very difficult for Josh Redfern No.8 and Dan Martin No.9 to manage the ball from the base of the scrum being forced backwards. This week, the scrum remained dominant and, with Billy Robinson No.1 back from injury, the pressure was all on the Wirral forwards. Macc kept the pressure up. Josh Redfern was able to pick the ball from the base of the scrum and run at the opposition defence. Dan Martin was able to deliver some great ball out to the backs and finally the pressure told with Macclesfield being awarded another penalty just before half time. Macclesfield ended the first half with a lead of 0-13. Given the weather conditions, some of the supporting fans felt that a 13-point lead might not be enough. Macclesfield had to hold against the conditions for 40 mins and with the light fading. 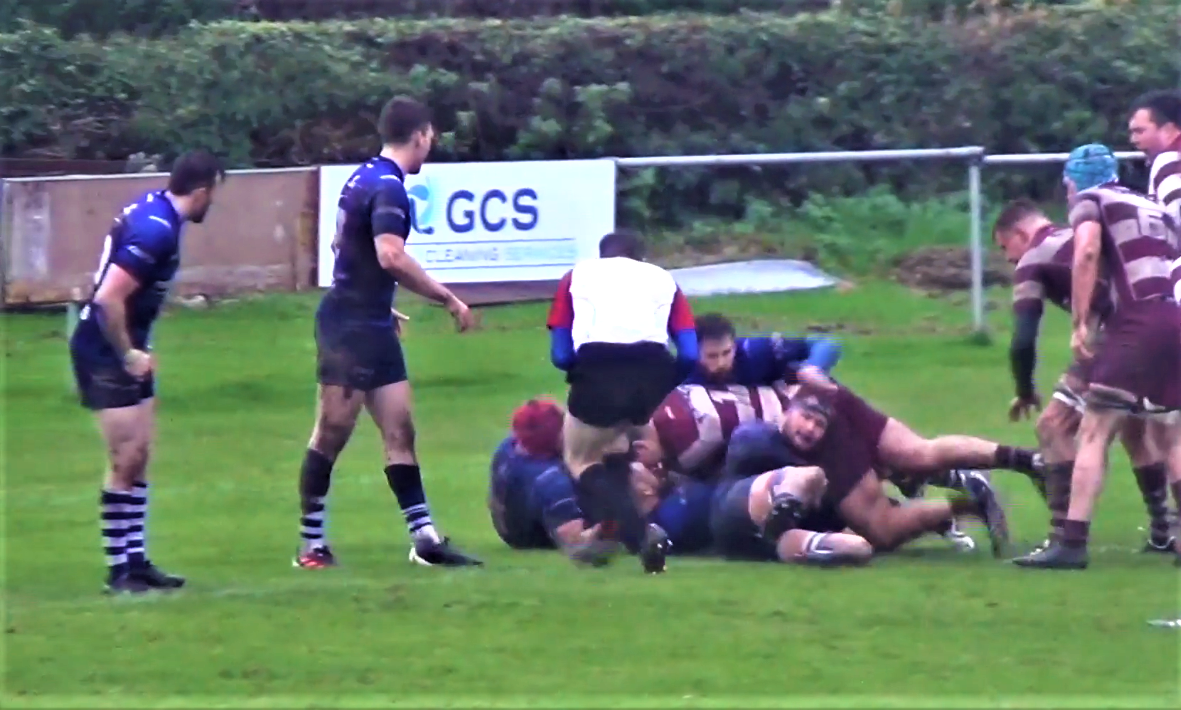 Macclesfield hold up Wirral over the line

The second half was attritional. Wirral kept the pressure-on and most of the half was played at Macclesfield’s end of the pitch. Wirral kicked for territory and kept Macclesfield pinned in their own 22 area. The forwards held the ball and went through phase after phase in defence and attack. The Macclesfield defence was holding well but discipline began to slip and the penalty count grew. Deep in to the half, and after a lot of pressure, the Wirral left wing made a couple of side-steps before breaking clear, he cleverly chipped ahead and it was a race to the line, with Myles Hall fast on his heels, the Wirral player just staying ahead to score, for a well deserved try, as Hall had flopped on top of him the Referee deemed it to be a Penalty Try. With 20mins to go the score was now 7-13 and Wirral needed a converted try to win the game. For the third time in the season the opposition used the laws of the game to force uncontested scrums. Was it a coincidence that on all three occasions the Macclesfield scrum was dominant? The decision immediately neutralised the scrum advantage that Macclesfield had in the conditions and Macclesfield still had to play the final quarter of the game against the driving rain.

A determined defence keeps out Wirral in atrocious conditions

A couple of substitutions were made to adapt to the change and the team demonstrated huge strength of character in defence. Discipline was poor and Wirral had a number of penalty opportunities inside the Macclesfield 22 area to score. They needed the converted try to win the game and so were forced to kick for the corner and try to score the try from a lineout rather than kick three points. Repeatedly they lost the ball as a result of the pressure from Macclesfield’s defence and finally having stolen the ball for the third time Harry Oliver was able to kick it in to touch and the referee blew his whistle to end the game 7-13 to Macclesfield. The win gave Macclesfield four valuable points in the league and a home semi-final in the Cup in February. Considering the conditions both sides played some entertaining and determined rugby.

Macclesfield are away at Alnwick in Northumberland next week for the penultimate game before Christmas. The second and fourth teams are both at home this Saturday and the Colts are at Home on Sunday so there is plenty to follow at Priory Park; everyone welcome.

Head Coach, Andy Appleyard, was philosophical about the day: “After not getting it right at Rossendale, last week, we talked about it at training, making sure our game-management was right for winter weather. We were ready for the atrocious conditions, and played with them, nothing fancy, but executing well when there was some rugby that was playable”. Andy felt that at times their domination was not being rewarded: “We were very strong in the scrum, putting Wirral under considerable pressure, but the collapsing scrum was continually being reset rather than penalised. I thought that our line-speed in defence was excellent, but several times we were penalised for being offside, which the video shows otherwise. Similarly our aggression at the ruck, fell-foul with the referee”.

What seems to be the case, generally, is that referees’ interpretations of the Laws, at this level, seem to be more critical than those applied at Premiership level. It’s a generalisation, but one would expect referees to err the other way given the difference in playing standards.

Andy was particularly happy with how the team had coped with the conditions: “We did very well against the wind in the second half, Jammers’ (James Hampson) kicking keeps improving week-on-week, and our tackling under pressure was very good. The conditions meant that it was not going to be a high-scoring game, so not making mistakes was vital”.

I asked Andy about the shape of the squad for the long trip up to Alnwick on Saturday: “Tom Morton will be out for some time yet, as he is having post-op tests since breaking his arm; Sam Stelmazsek is almost there, we are hoping for a return in early January; we are still waiting to hear back on Aaron Wilman’s bicep injury; the good news is the likely return of Jordon Simpson, we are hoping that he’ll be in the reckoning for Saturday’s trip”.

Alnwick, are the form-team this season and beating Preston Grasshoppers 7 – 32 was a major scalp at the weekend. They will be determined to keep their Greensfield ground a fortress and maintain their unbeaten home record. The Macc lads will need to up-their-game again if they are to come away with the points.