Macclesfield Rugby Club’s ‘One Club Ball’ and Awards evening provided the perfect setting for Sam Moss to side-step into retirement after a record breaking career with the Club.

Over 260 people gathered on Saturday evening, at Priory Park, to celebrate the rugby season just finished, whilst also looking forward to the next. It was a very inclusive event with all sections of MRUFC having a great time, until late into the evening. As an adult event, the awards were given across the senior teams including the Women’s team, plus some special Club awards for other endeavours. 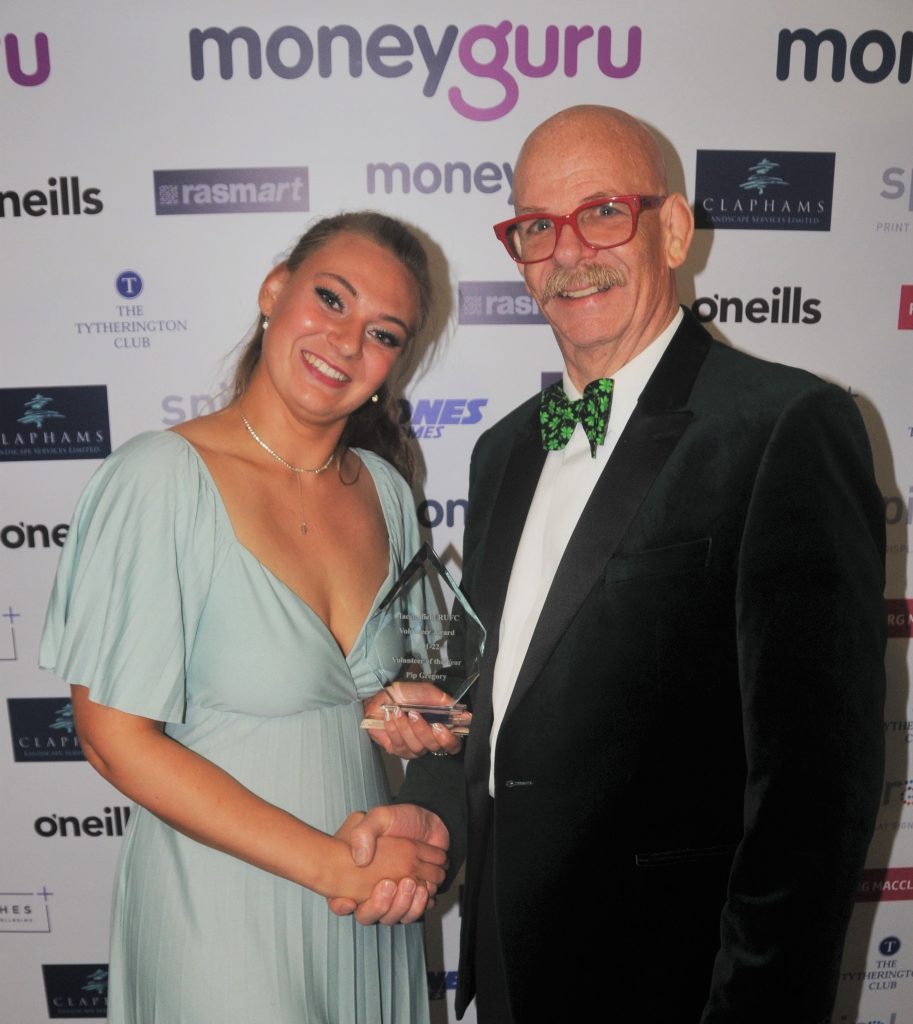 Pip Gregory Volunteer of the Year

The first Club Award of the evening went to Pip Gregory, for Volunteer of the Year. Her work in setting up Girl’s Rugby at the Club had been exceptional, developing teams from U12s to U16s.

Pip also won Volunteer of the Year at the Cheshire awards and now represents the Club at the Twickenham finals. Clubman of the Year Award went to Jim Curtis, besides propping up the 2nd team front row, in the absolute twilight of his career, Jim looks after all matters discipline, coaches the U15s, and has helped to restructure the Club’s beverage offering. The prestigious Bert Ashley trophy, given for outstanding team spirit went to Billy Robinson; after suffering a serious injury the previous season, he fought back playing for all of the teams until he got back into the 1st XV, but sadly got injured again before the end of the season. The Chairman’s Player of the Season went to Miles Hall, who had had another very good season, inspiring the younger players with his determination and topping the try scoring records again. 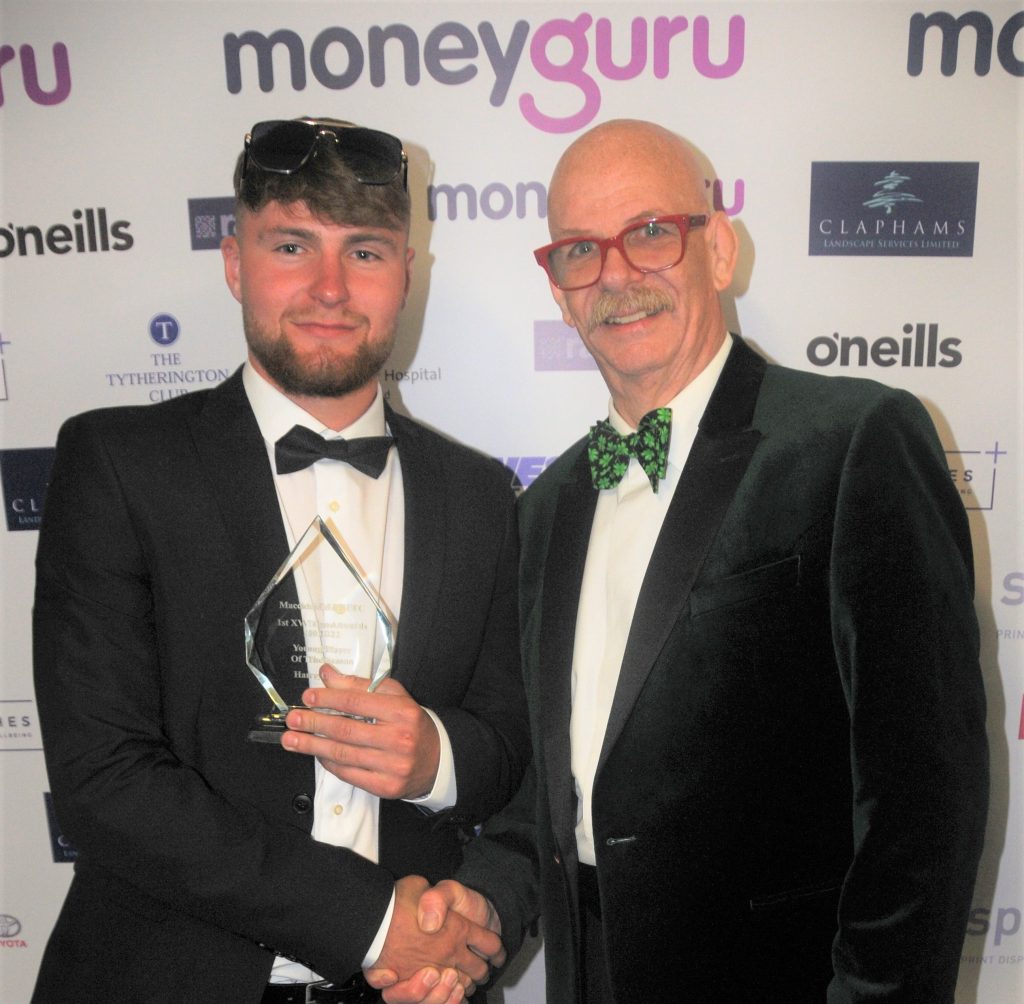 There were 23 awards in total, with the 1st team awards showing-off some excellent individual performances throughout the season. Harry Oliver won Young Player of the Season, often the heart-beat of attack and scoring a massive 223 points in the season. Dan Martin won the Most Improved Player, starting in the 2nd VX before yo-yoing in and out of the 1st XV until finishing in the prime spot at scrum half. The coaches voted Harry Harding as their Player of the Season, his development had been sensational, always providing the go-forward making many metres over the gain-line. The 1st team players voted James Oliver as their man; he could have won MOTM almost every game of the season. He was seen making four tackles in 10 seconds away at Sandal, every facet of his game was first class and taking over the captaincy after Sam Moss broke his leg, demonstrated his capacity as a leader. 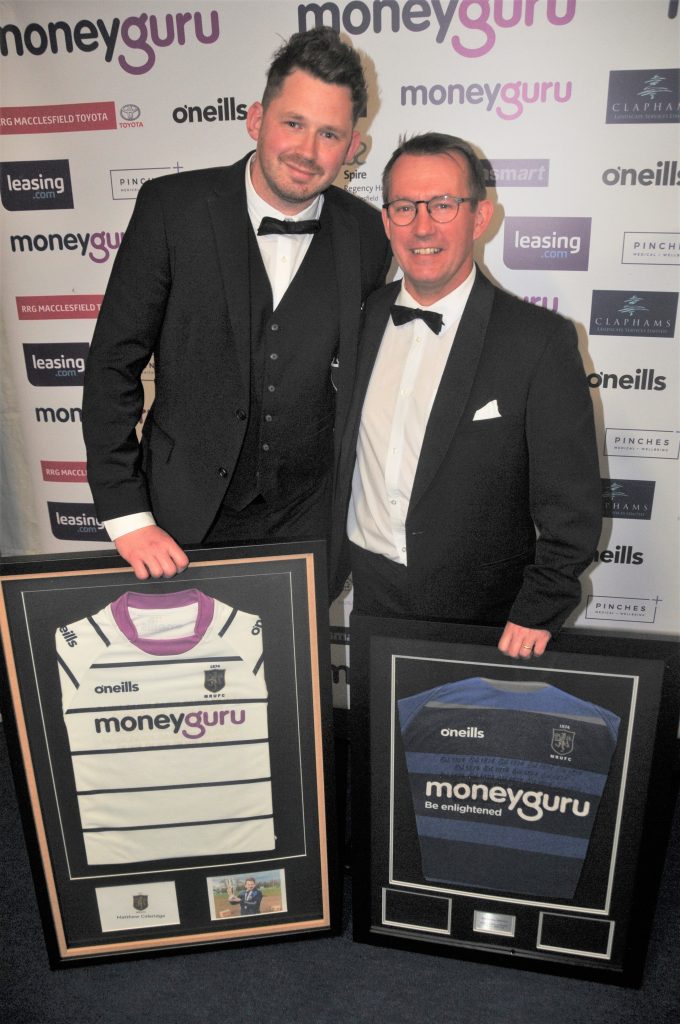 There were tributes to George Edwards for his work as Logistics Manager and Matt Coleridge for his many years as the 1st team Analyst, with Andy Appleyard commenting that it was deserved of the Premiership.  Matt is taking a year off with family commitments, but the Club will be hopeful of his return.

The top tribute was left until last, the climax of the Awards and a fitting tribute to a player that has contributed more on the playing field than any other, in the Club’s existence since 1874. Lead Coach Andy Appleyard spoke passionately about Sam Moss both as a player and a friend, saying what a privilege it was to talk about him, his personal achievement and all the memories he has created for many team-mates over the years. Andy played a video that was a fitting cameo to his outstanding rugby career. 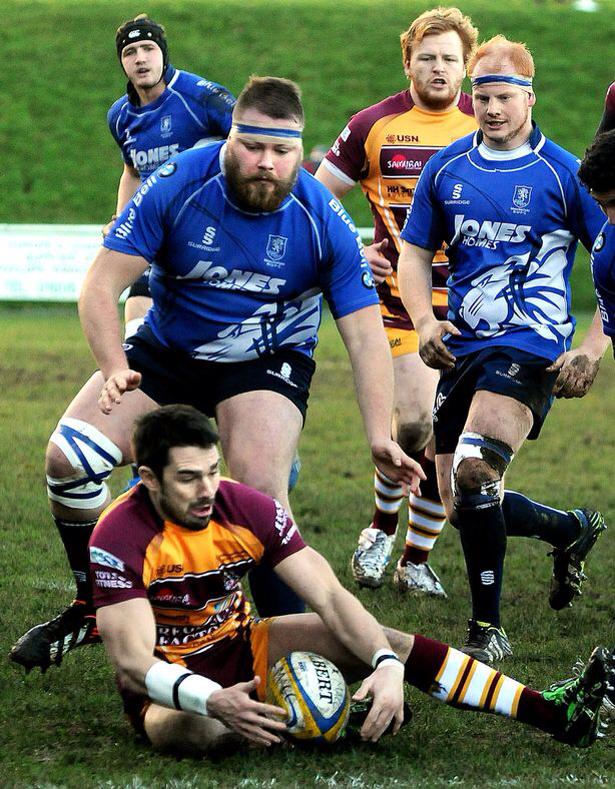 Sam Moss’s journey, since Mini Rugby, has always been with Billy Robinson, their bond as rugby players and mates has been inseparable. Whist Sam Moss has said “that’s it” Big Billy is waiting on his current injury, before deciding. I recall them playing for the Vets when they were just 16 years of age, at that age they still acquitted themselves very well. Mossy became a permanent fixture as hooker for the first team and was part of the team that won at Twickenham against Barking before entering the third tier of rugby. In fact he was a massive part of all of the very successful teams that played at that level. His position was so secure, it was coined the Sam Moss finishing school for Hookers, keeping out the likes of: Tommy Taylor, Curtis Langdon, Cameron Neild, Tom Cruise and Christian Taylor. He amassed over 350 1st team and Cheshire caps in his playing career, a record that no other player in all the teams up to the premiership has come close to. To put it into perspective, the legendary Richard Wigglesworth only made 286 appearances, to top the Premiership charts. 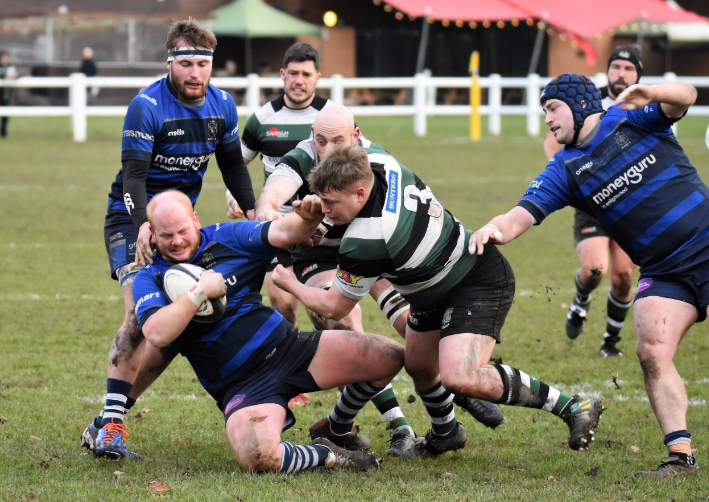 Mossy and I have chatted a lot about the game, and Macclesfield, over the years and he has always remained humble about his own game, but it has been there to be seen and admired by everyone who has sat in the stand at Priory Park. I asked President Peter Harper to comment on his many years with Mossy: “Sam Moss, What a clubman! I’m sure it didn’t end the way Mossy would have wanted, but Crikey – what an innings! 350 first team appearances, many at the highest level Macc has ever played at, and never ever had a poor game.  Indeed, he was held in the highest esteem by many, so called, ‘senior clubs’ all over the land. I first came across Mossy when he and Billy Robinson played with us in the Vets, who’d have thought that all these years later, he’d be skipper and still commanding his place in the first team. 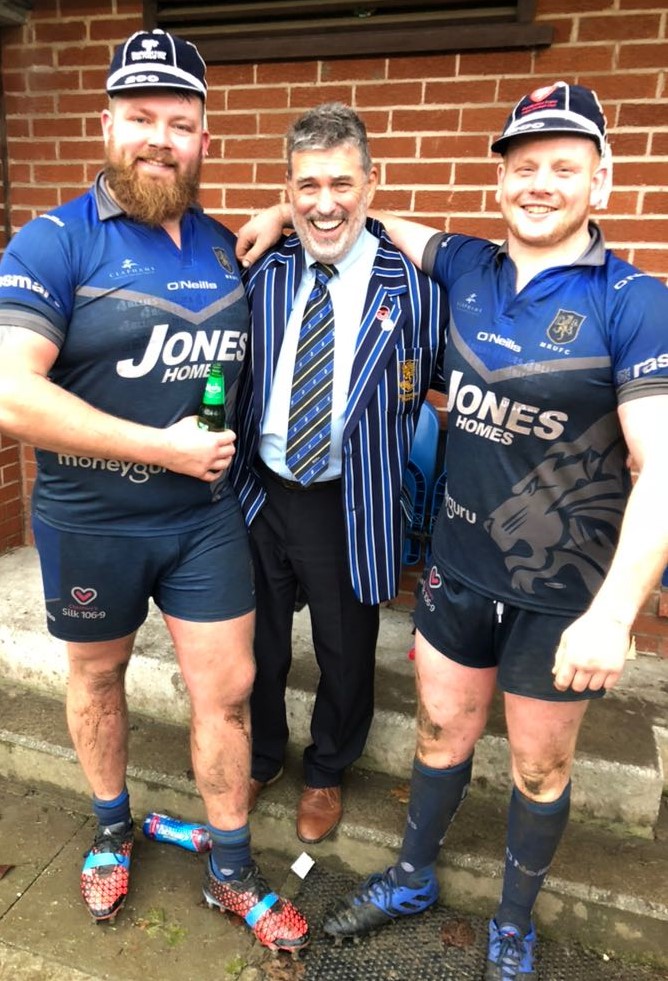 Billy and Mossy with Pete Harper

In today’s game, where loyalty is a dim distant memory, Sam has been a true ‘one-club-man’ and we should be proud and extremely privileged to have had him at Macclesfield. It goes without saying but you can’t mention Mossy without Billy, who, but for some serious injuries would have matched Mossy’s incredible number of appearances. Huge thanks to both of them for their commitment to our Club and we wish them both all the best for the future – they don’t make them like that anymore!”

Chairman Stephen Branch had this to say about Sam and his best mate: “I remember coaching Sam and Billy as very young players in 2001. Of that entire age group Sam and Billy were the only two who stayed at the Club and played through the teams to make it in to the 1st XV, and never looked back. A partnership such as theirs would be hard to find in any environment. They sum up everything that is good about playing our great game and have represented our Club outstandingly over the years. Their longevity at the highest levels of Club rugby has been impressive. It has been and remains an absolute pleasure to know them both”.

Even though Mossy has said: “That’s it”; I have a sneaking suspicion that we may see him run out onto the pitch one more time to wave farewell to the Priory Park faithful – watch this space.

These were all of the Awards’ Winners: 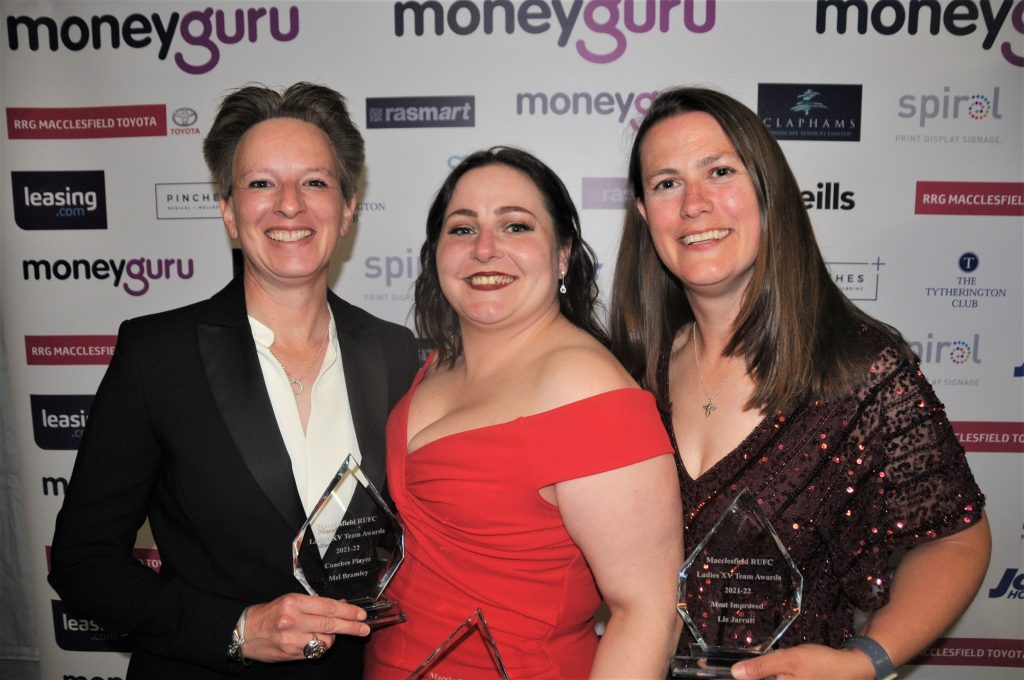 Volunteer of the Year: Pip Gregory 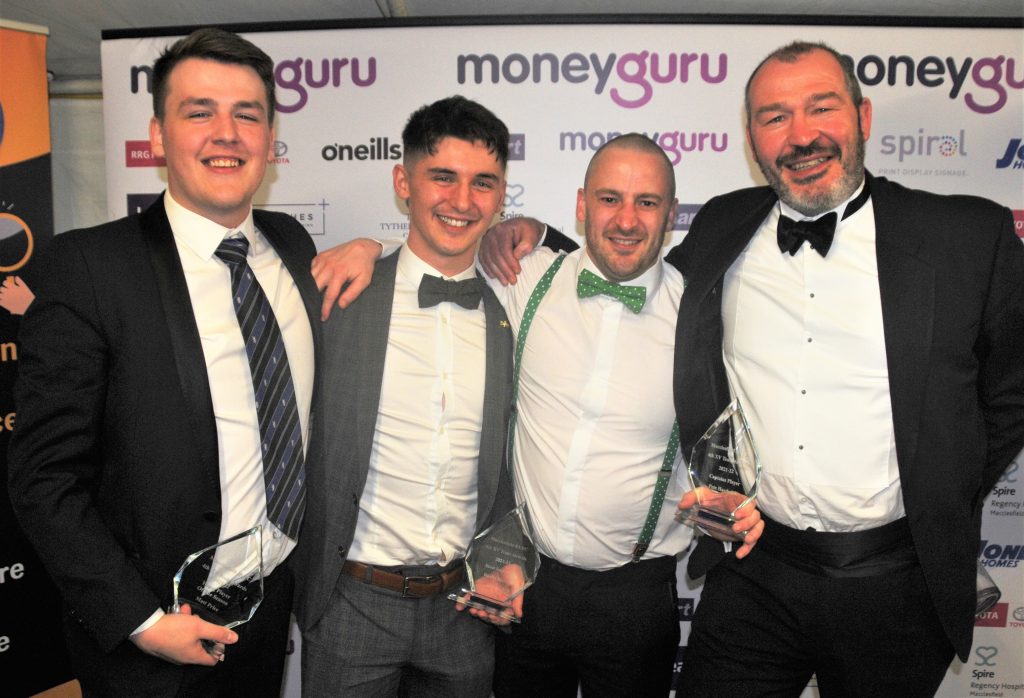 Clubman of the Year: Jim Curtis 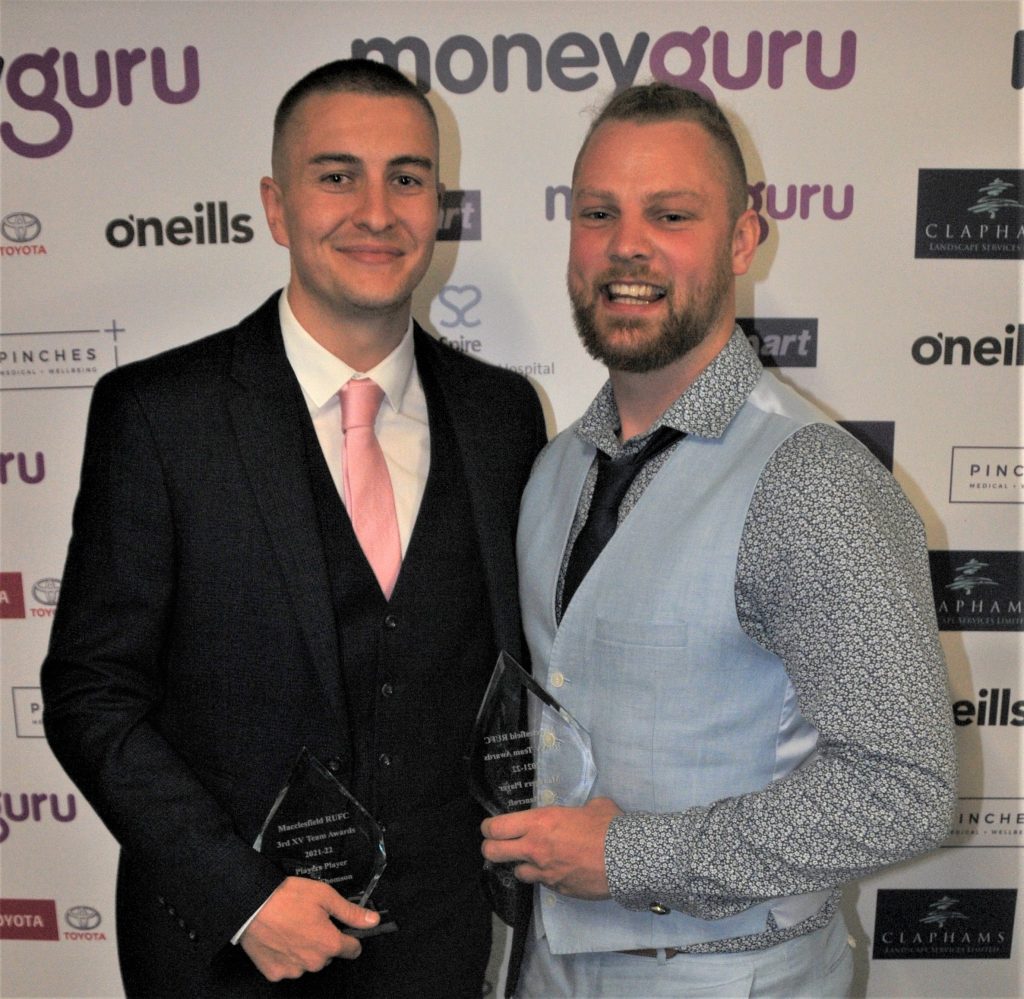 Jonny Thompson and Sam Bancroft from the Thirds 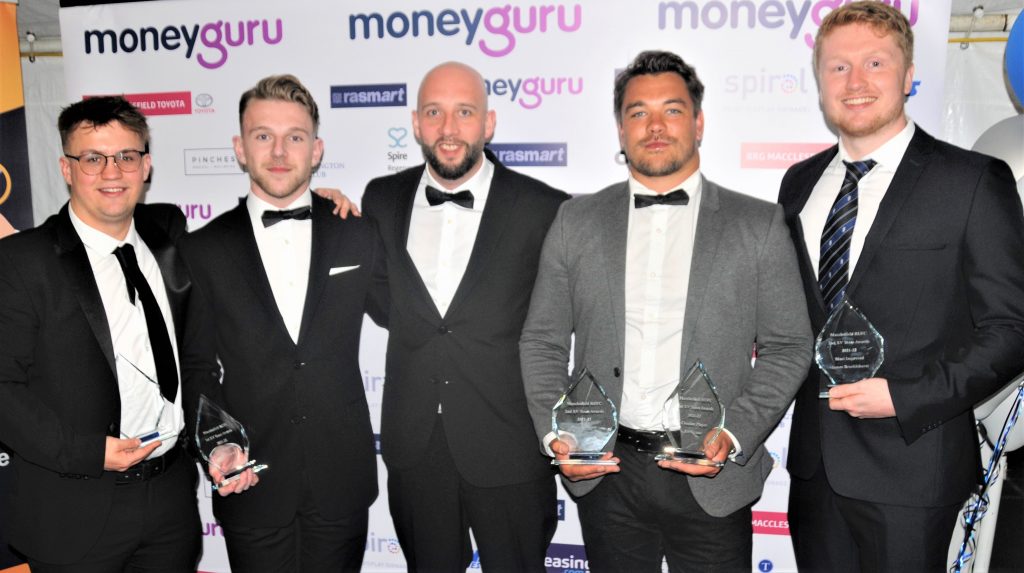 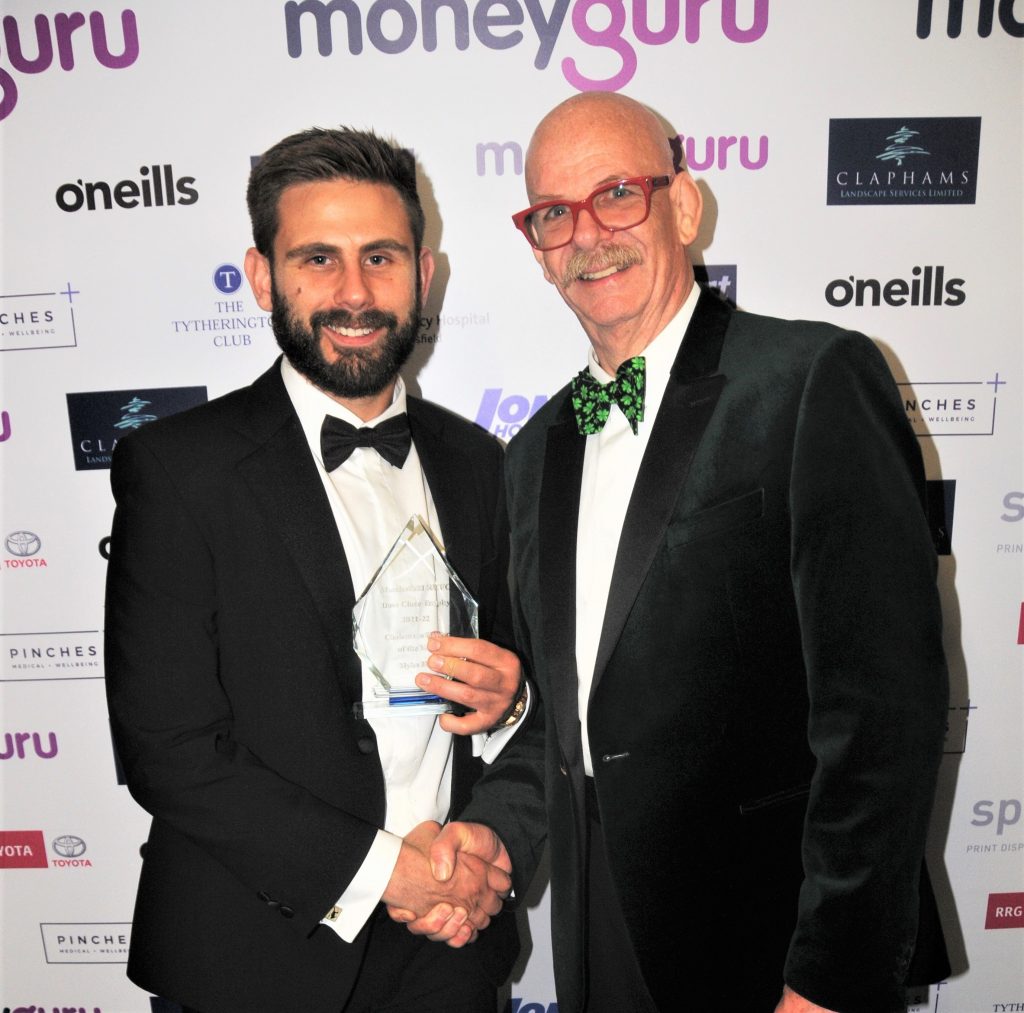 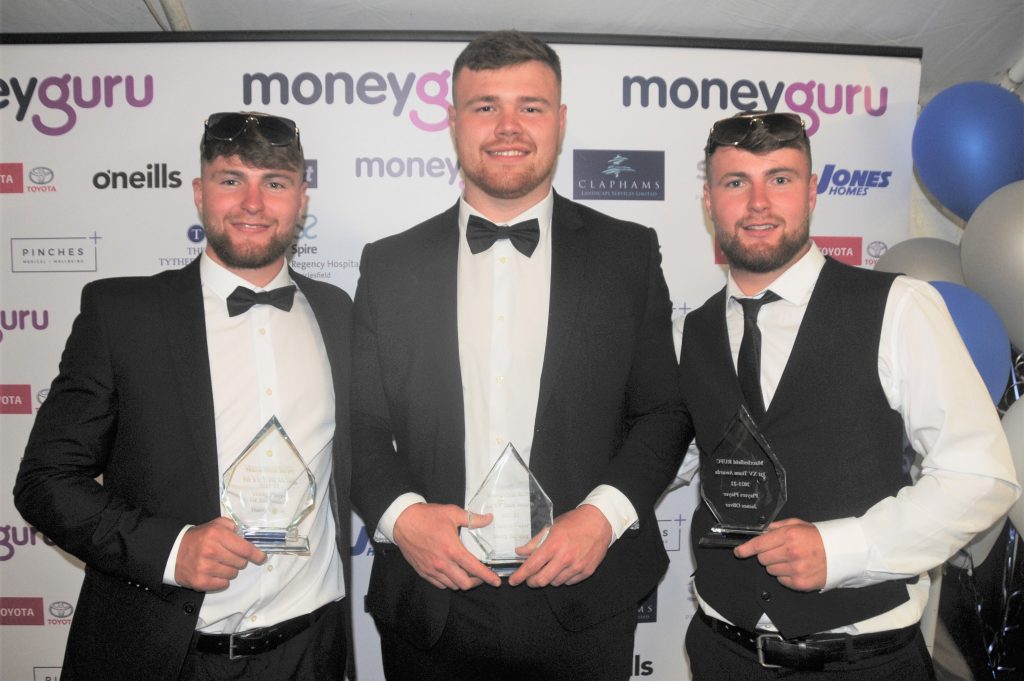 Harry Oliver, Harry Harding and James Oliver with their awards