Following on from the announcement of the new playing and coaching structure at Macclesfield Rugby Club, Head Coach Andy Appleyard recently confirmed the final piece in the senior rugby structure. Darren Lamon (Daz) had had a spell at the Club some 15 years ago, but injury, and some guidance from friend Brendan Thomas, started him on his journey as a Coach.  After doing some work with the IRB (World Rugby) he took on a development role with Sale Sharks, before taking on a job with the Sale Academy. When Covid struck he worked with Sale to set up the Ladies Elite Premiership team and has been their Coach since. Daz joins the team as Skills Coach with specific responsibility for the 2nd XV along with Russ Tomlinson. Daz told me: “Besides helping as a Skills Coach, hopefully I’ll be another set of eyes, supporting Apps, on players and tactics, giving Apps the chance to step back and look at the bigger picture at times in training sessions. Hopefully I can bring a few nuggets from the pro game as well, to support Wadey and Apps, and take skills sessions, while injecting a bit of energy into 10 or 15 minute blocks; that’s where the role is, as well as helping with the transition for Colts into the senior teams”. Daz, explained that the transition from Colts was much more than just the playing side, but more of a holistic approach, that looked at all of the other factors of transition. 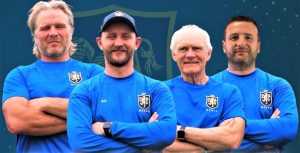 The coaching line-up for the senior squad is probably the strongest, in terms of numbers, experience and skills, ever compiled at the Rugby Club. Head Coach, Andy Appleyard, will have the services of dual international, player/coach Clive Griffiths, Forwards Coach and ex Premiership/Championship player Ben Wade, and Sale Sharks’ Darren Lamon. The four are then supported by Consultant Coach, ex England International, Chris Jones, plus Sam Moss and Billy Robinson, sharing their considerable front-row knowledge. 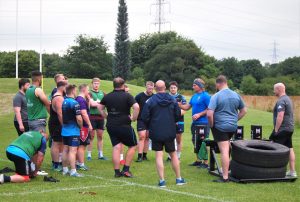 Ben Wade coaching the shove, with ballast from the brothers

The Coaches have set a pre season training schedule, with a programme that is designed to constantly put the players under pressure; Andy Appleyard had this to say: “Our aim is to execute quality rugby at a higher pace than the opposition, our sessions replicate this, but at a step up from the normal game pace”. Watching Ben Wade put the forwards through a relay, scrummaging machine session demonstrated some of this, as the boys went up and down the hill before doing numerous reps on the machine. 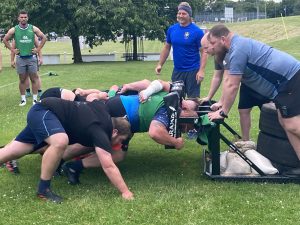 The new squad for the season is now virtually in place; one or two have retired and a few more have moved on to pastures new. In their place 11 new players have joined the squad and are currently being put through their paces to get up to selection standard. From the recent session that I watched, two of the new boys stood out: Kai Fagon and Junior Gelsthorp. Junior joins the Club from Sheffield Tigers, and looks to be a powerful scrummager, unsurprising given his background as a previous world champion power-lifter. Kai joins from Burnage, some may recall him from the last game of the season and also playing in the Macclesfield 7s team. Kai is a converted winger now playing second-row or back-row; he is a big athlete, who I am sure can cross the white-wash for Macc. Two of the long-term injured, Aaron Wilman and Jordan Simpson should be back training soon which will hopefully give a healthy headache to the coaches come September. Andy had this to say: “We now have plenty of options in the squad for the season ahead and will be testing the new boys as we approach the pre-season matches”.

Pre-season matches start with a trip back to Wharfdale in Yorkshire on Saturday 6th August; due to holidays, this is now likely to be a combined 1st/2nd team fixture. This is followed on the 13th by a another visit from Hull, now promoted into National One; the final game will be the first round of the Cheshire Cup away to Birkenhead Park on 27th August. The following week will see the start of the season away to newly promoted and old rivals, Manchester, for the first of many derby matches this season.