Macclesfield’s victory in the Cheshire Cup final arguably changed the fortunes of the Club because it was the first time the Club had ever won the trophy, and did so by beating Sale! Macclesfield were plying their trade 4 divisions below Sale.

Macclesfield, captained by Matt Harding and coached by Clive Kershaw, Graham Waters and Gary Brightwell, found their confidence, and ran out 21 – 4 winners and lifted the trophy. David Cummins, who played in the centre that day, remembers “Sale had a team with some top class players as you’d expect, but didn’t actually play the full first 15. They certainly had a number of regular first team players representing the Club on the day, supplemented by some second 15 players. Macclesfield obviously were very much the underdogs, and most people expected a Sale to win handsomely, having dominated the Cheshire Cup for a long time.” “There was a massive crowd down at Wilmslow, I think around 3,500. We’d played well all season, and the league title went down to the very last game the following week against Manchester. Unfortunately we couldn’t quite pull it off, and Manchester won that game narrowly.” “But the victory over Sale FC was a pivotal moment for the club and acted as a real catalyst. We continued our run of form the following season and won the league and were promoted. In fact I think we went through the whole of the 1992/93 season unbeaten in both league and cup games. We won every single match we played and won the Cheshire Cup again that season too.” 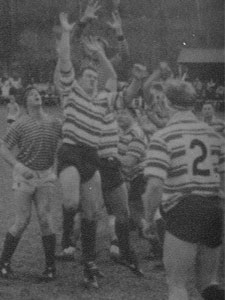 Northampton are up to fourth in the Premiership after a 44-26 win over London Irish: trib.al/ByXK1Ap

"See where the space is, and go and attack it!" "We did some of the game really well, and we did that for a long period of time." @SaintsRugby's Attack Coach Sam Vesty is positive about, most, of the performance against London Irish. 🤝 #GallagherPrem

LOOK AT SLEIGHTHOLM GO! 😲 A delicious ball by Rory Hutchinson to find the winger. 😍 The last person you want to see running at you over your shoulder 😅 #GallagherPrem

The start of @SaintsRugby vs @londonirish has been so full-on! 🥵 Even Wayne Barnes has been caught up in the action. 😅 Surely a card though ref?! 👀 #GallagherPrem

When Alex Mitchell puts his foot down, he's gone! 😳 Great angle on the run from the @SaintsRugby No.9 🏃‍♂️💨 #GallagherPrem