The purpose of all the practice was to fulfill a number of fixtures in the new year, 1927. Macclesfield RUFC started their second life with a game against Davenport on 1 January 1927 with W J Siggins as captain. The game took place at Grange Road, Davenport, with a 10-45 a m. kick-off. Many years later Davenport were to become Stockport Rugby Club and counted amongst their stalwarts Keith Bentley, son of Charles Bentley a stalwart servant of MRUFC as both player and committee man and eventually President.

A copy of the article introducing MRUFC in its first year, hangs in the Clubhouse (see below), the original appeared in the Macclesfield Courier 1st January 1927. 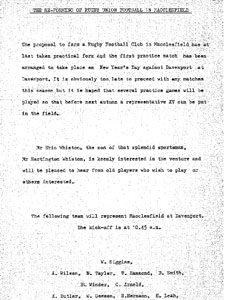 The report of the game, a 63-0 reverse!, notes that it was attended by a number of “Macclesfield enthusiasts” presumably walking off the New Year celebrations. But more importantly that raw inexperience was no match for practiced opposition despite game efforts from Siggins at full back and Arnold and Winder at half back. 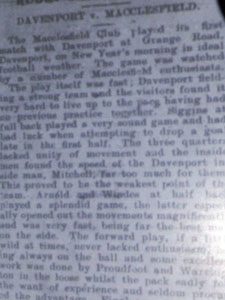 The RFU has formed an independent diversity and inclusion advisory group. Chaired by @ugomonye alongside @GiselleM18, it has been established to support the RFU with its goal of driving rugby union in England to reflect the diversity in society. Find out more ⤵️