The long trip up to Blaydon proved to be fruitless in terms of points for The Blues on Saturday, as they struggled to compete against a powerful, well drilled pack and a game plan that would have had Geoff Wappett in raptures.drooling in delight.  Missing influential skipper Mike Finnimore (out until New Year with a busted shoulder) and a couple of other big hitters in the pack, Macc were always up against it in a dour, forward dominated game, and were constantly pushed by by a continous barrage of kicks from the Blaydon 10 & 12.

So now is the time to get behind your team and give them some much needed support, with this Saturday`s home match against Wharfedale……….. a game The Blues desperately need to win. Due to the ridiculous way the fixtures have been allocated, this will be The Blues last home for 4 weeks until Esher visit Priory Park on 3rd January, so please make the effort to come and get behind the team.

As mentioned, The Blues went down at Blaydon, the Lions had the day off for Christmas shopping, the 3′s were at home to Didsbury Toc H and won 78 – 5 and the 4ths/Vets played Sefton 3′s in the cup and won by a remarkable 103 – 0.

The Blues host Wharfedale as mentioned, The Lions travel down the road to Sandbach, the 3rds are away at New Brighton, the 4ths/Vets entertain Linley & Kidsgrove 2nds and the Colts are at local rivals Stockport on Sunday

If you or your child are playing rugby or football at Macclesfield RUFC, then you need to pay your annual subscription. This is now OVERDUE and we will be cracking down on those who think they are OK to play without paying – please contact Bev at the office or pay online NOW if you haven`t already paid.

NEXT HOME GAME FOR THE BLUES

December 6th sees Macclesfield Bluse play host to Wharfedale in another `must win 8 pointer` – kick off 3.00. Come down and support your club for what will surely be a fantastically competitive game of rugby between 2 teams at the wrong end of the table. The Christmas Lunch is sold out and the atmosphere should be electric!

To help raise much needed funds for the club, we will be holding an auction at the lunch, 1 of the items being a fantastic limited edition (Number 15 of 125) rugby ball to celebrate Leicester Tigers 125th Anniversary. Signed by 15 of the greatest players of the club. Names include World Cup Winners & British Lions legends Martin Johnson, Martin Corry, Clive Woodward and Neil Back. There are also other International and Lions Players. Comes in a presentation case with certificate of authenticity.

If you would like to make an e-mail bid, please do so by sending your bid to; peter@maccrugby.co.uk. The ball will then be auctioned at the lunch on 6th December with the highest bidder (be that on the day or e-mail) being succesful. This is the chance of a lifetime to own a real piece of rugby history so don`t lose out………….put in your bid before the 6th December, but remember – if a bid on the day is higher than yours, you will lose out, so put in the best offer you can!

Huge Thanks to Mike Keeling who has very kindly donated this fantastic prize……………Cheers Mike, really appreciated.

CHANCE TO EARN SOME MONEY!

We have a vacancy for a self motivated, driven person to work on a generous commision basis to find sponsors, partners and advertisers for MRUFC.  If you feel you fit the bill, please contact myself in the first instance peter@maccrugby.co.uk

This `job` is as big as you want it to be and would benefit both the club and the individual financially.

Macclesfield RUFC is heading swiftly towards it`s 140th anniversary (founded in 1877) in 2017 and has a rich and interesting history. As other clubs have, it would be great if we were to have a `Club Historian` to gather information, pictures, memorobilia etc and put together something in time for the 140th anniversary. Whilst this may seem a daunting task if taken on by one person, it may be an interesting, exciting and rewarding project for a group of people. If you feel you could assist in any way, either by being part of the team or providing information etc. please advise me in the first instance and hopefully we can put something together. 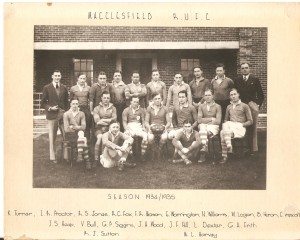 The big boys from Ellesmere Port travelled to Macclesfield looking to come and upset the party! Unfortunately our boys knew what to expect and what to do to nullify the size of the Port lads! Max L really is becoming one of the natural leaders of the team and certainly the forwards. Always first to knock the big lads down and get stuck in. Max set the tone for the day as time after time he brought the big lads down. This gave the rest of the team confidence, and more boys started having a go and realised it’s not so bad after all tackling the big lads as long as you get your technique right!

Although the forwards really were up against it, they did manage to secure more scrum ball than when the teams last met, we also competed well at ruck time, this could be down to the fact that the “Big Tom’s” have been growing in confidence since the start of the season and are starting to throw their weight around a bit, which in turn frees up Harry G to play more of a loose forward type roll, securing good turn over at the breakdown along with Max D. This gave Alex D a chance to release the backs. Louis was back in his favoured position at fly half, and a slight reshuffle saw Ben and Will paired in the centres. Some lovely handling and sweeping angles saw Morgan grab a hat trick, not bad for a mornings work? Morgan worked hard for his tries which all came as a result of good team play.

It does also help that, as Mark Droy put it; “that lads got some wheels!!!” Ben got the other try, from good defensive pressure. Will led the back line up in defence and Ben took his opportunity to intercept a loose Ellesmere pass and run the length of the pitch to score. Some good sniping runs from Christian and George kept Ellesmere on the back foot and any ball kicked over was safely collected by Jake and turned straight into an attacking opportunity. There was more brave defence on our own try line, repelling Ellesmere again and again. Smithy, Thomas Langley and Alex Jac both held up Ellesmere players over the line a number of times. Carl was doing more of his trademark turnovers by stripping the opposition of the ball. It was a great morning of rugby.

The boys had to work really hard to overcome Ellesmere and the score line  is a thoroughly deserved one. Well done to you all, you really are starting to play for one another and you becoming a really tight unit.

Macc hosted teams from Chester and Sandbach  and put in excellent performances to take a clean sweep of the 4 contests – but Macc had to work hard, the scorelines hiding how competitive the matches were.

In the games against Chester, Lewis put in a man of the match performance in a squad that all played great rugby at times – adding to good running, tackling and passing with some amazing turnovers. In the first game against Chester Macc secured the win by going 2 scores ahead only at the end, but the second game was more in favour of the home side as they had the luxury of rotating on lots of substitutes against the visitors who had put in a big whole-hearted effort and were understandably tiring.

The matches against Sandbach also produced some big performances from the Macc boys, Sam H leading the way with strong running and 5 scores while Charlie O was able to add 2 tries to the brace against Stockport last week, before leaving the field after taking a knock. Archie also continued his good start to his first season of rugby with 2 tries.

We will shortly be distributing the RFU raffle tickets for EACH AND EVERY MEMBER TO SELL. 90% of the takings – potentially £9,000!!! – goes to the club and ALL MONEY raised will be allocated to a specific project to improve the facilities at the club NOT TOWARDS PLAYERS WAGES as is a popular misconception. We are in desperate need of funds to prolong the life of the astro turf in order that it can keep producing much needed income for the club. The newly laid pitches require better drainage and care. To repair the astro turf and upgrade the playing pitches will cost in the region of £6,000…………… We average around £3,000 each year in ticket sales, (which means only 1 in 3 of our members are pulling their weight) and need twice that to carry out these essential works. Please ensure you sell your allocation as you can see how desperate we are for the money.

Paul Bartle (club member and teacher at Kings School) and Fred Taylor (2nd team & Colts coach) are organising a try festival for Tuesday 23rd December when a Macclesfield Select take on a Kings Former Pupils team under the lights at Priory Park. It will fun, fast & furious! Kick off time and final details to be decided, but put in your diary now!

Please feel free to e-mail any news, items etc. related to the Rugby Club (to; media@maccrugby.co.uk) and if appropriate, I`ll be happy to add to this column.