The day began badly at Eden Park when England simply did what they do best and ensured that the squad will be available for Premiership games this coming weekend and it just got worse at Priory Park in the afternoon when Macclesfield handed five points to a committed Tynedale side with indiscipline that saw no less than three players in the sin bin for most of the second half. 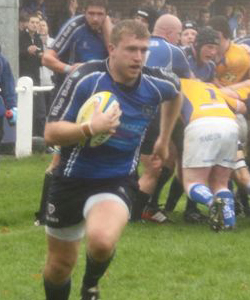 The Blues led 5-0 at the interval on a dank & overcast day for rugby but the visitors ran in five second half tries – most whilst the home side had fourteen players on the park – and it can hopefully only get better when Rosslyn Park visit this weekend (see preview). Whilst the coaching team will not have been happy with some of the match officials decisions which caused frustration amongst supporters on the touch line as well as on the park it takes two to tango and Tynedale held their discipline and thoroughly deserved their ‘W’ after a couple of poor results.

Despite the unexpected defeat the Blues remain second in SSE National One as Fylde crashed to unexpected defeat at the Woodlands to Barking who won 31-18 despite having one player sent off (red) and one in the bin (yellow).  Birmingham/Solihull beat Blaydon 31-18, Blackheath beat Sedgley 41-34 in what sounds a belter, Cambridge won at Coventry 29-27, Ealing retained top spot with a 29-22 victory over Stourbridge, Jersey had an easy day at the office beating Wharfedale 45-5 and finally Rosslyn Park beat Cinderford 22-17.  All of which shows just what a wonderfully competitive league this is.

Around Priory Park the Lions returned to winning ways with a 39-3 demolition of Cheshire rivals Caldy and the Thirds had an altogether closer victory by 10-6 against Wilmslow Seconds.  The Fourths ran riot at Ashton on Mersey beating their Thirds by 80 (eighty)-nil

Back to the World Cup and England will look back on the tournament with not too much positive having come out of it but let us thank our Celtic cousins for providing some heart and spirit in their encounter with Wales now taking on France on Saturday for a place in the Final.  I sincerely hope that they do it.  New Zealand duly saw off Argentina this morning after Australia beat South Africa in a tense encounter so, whatever happens it will be a North v. South Final.  Everyone will now have opinions on what England Rugby should do but the question I sometimes ask myself is why, unlike the Welsh for instance who wear the three feathers with passion, do our lads perform so badly??

The best three games of the last few weeks have both been of the thirteen a side code culminating at Old Trafford on Saturday evening which means at least one of the Priory Park faithful will be a happy man!!

Before the game against Rosslyn Park there is a pre match dinner and I believe that there are still places to be had so if interested please contact the clubhouse on reading this article. Red Pepper & Tomato Soup, Roast Pork, Cheese & Biscuits all on the menu.  £35 members, £30 non members & £15 season ticket holders all of which includes match admission & programme.

That’s it for now – off to see the Grimethorpe in Stoke,