Macclesfield’s unbeaten home record was brought to an abrupt end conceding five tries on the way to a 29-5 defeat against Tynedale. 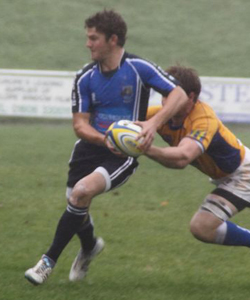 Ryan Parkinson got Blues only score in the first half as a pair of tries each for Alan Rogers and Sam Shires, as well as another from Grant Beasley, handed Macc their first defeat in three matches.

Despite heavy rain and greasy conditions, the game got off to a flyer, both teams eager to gain an advantage in the opening stages.

Skipper Tom Eaton dictated the game brilliantly with the boot as his side dominated territory early on.

The good work finally paid off as Parkinson crossed the line, peeling off the back of a scrum to receive a pass from Charlie Mulchrone, before finishing well.

Eaton was unlucky not to add the extras as the elements began to take a grip on the match.

As the match began to settle down after the frenetic start, Tynedale started to get into the game, causing problems with ball in hand, while also defending stoutly everything Macc could throw at them.

Alan Marsh was sin-binned for repeated infringements at the breakdown to put a sour end on a balanced half for the home side.

Despite Blues holding the narrow lead at the break, the contest was very even and the match was still well up for grabs.

Tynedale started the better after the interval and made the man advantage count soon after Shires running through for his first score.

Matt Outson added the extras as the visitors had the lead for the first time in the match.

Shires completed his brace six minutes later, capitalising on a number of missed tackles to score his second.

Towards the end of the match, Dale looked as fresh as at the start of the game and scored three more tries in six minutes to put the match to bed.

The defeat is only Macc’s second of the season and  the first at home in this year’s campaign, while Tynedale secured their first win in three matches.

Director of Rugby and Head Coach Geoff Wappett reflected on his side;s performance saying: “The result was desperately disappointing for us.

“We looked on top in the first half, but nothing seemed to quite come off for us.

“The conditions played their part as well.”

Wappett also cited ill-discipline as a reason for the defeat at Priory Park.

“The yellow cards cost us. We were forced to play almost half an hour of the second half with 14 men, which you just can’t do in this league.

“We pride ourselves on bouncing back after disappointments. We’ve suffered them before but we’ve always come back, which is why we haven’t lost any two games in a row so far.”

Macclesfield host Rosslyn Park on Saturday and will look for continued success against the club having beaten the London based side home and away last season.