Macclesfield couldn’t build on their emphatic win against league leaders Ealing last week as they were beaten 24-15 by Jersey at Priory Park. 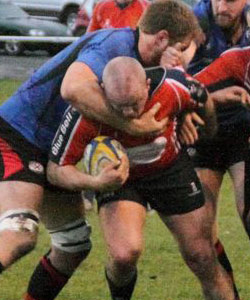 Josh Fowles and Ed Stobart crossed for Blues but Geoff Wappett’s men couldn’t turn long spells of possession into more points as they were left frustrated by their opposition’s stout defence.

Wappett said: “We should have scored in that second half. We were camped in their 22 and got a lot of ball.

“We were much better at keeping the ball [in the second half]than in the first.”

The match got off to an open start, both sides keen to attack with ball in hand.

Guy Thompson opened the scoring for the visitors running most of the length of the field, but the league’s top point scorer Michael Le Bourgeoise couldn’t add the conversion.

Macc started to pile on the pressure though and after coming close through the forwards, the ball was spread wide allowing Fowles to touch down in the opposite corner.

Skipper Tom Eaton couldn’t add the extras but responded well with a penalty soon after to give his side a slender lead.

The lead didn’t last for long though as Jersey wing Ashley Maggs once again regain the advantage for the visitors.

Jersey were then reduced to 14 men for the first of two occasions when Stephen O’Brien was sin-binned for a technical infringement.

That didn’t stop the Jersey charge though and full-back James Copsey extended the visitors lead before Le Bourgeoise made it a nine point game at the half.

Jon Brennan was the second Jersey player to go into the bin shortly after half time but the Macc couldn’t break down the toughest defence in the league until just short of the hour mark.

Ed Stobart, playing at full-back in place of Fergus Mulchrone, picked up the ball and finished well in the corner; before Eaton reduced the gap to two points with the conversion.

Macc kept applying the pressure and came agonisingly close to taking the lead on numerous occasions, but were just unable to find the cutting edge to cross the line again.

With three minutes to go the result was sealed for Jersey and a bonus point cruelly taken away from Blues when Ed Dawson ran through to put the match beyond doubt.

Wappettsaid: “We don’t need to change lots, its only little things that need tinkering with. We’re not a bad side.”

Skipper Tom Eaton: “We got ourselves doing the things we were doing wrong a few weeks ago.

“We’ll go to Cinderford and play better. We owe them one as they beat us well at their place last season.”

Macc travel to Gloucestershire on Saturday where they face Cinderford, who were beaten 24-0 by Tynedale last time out.