Macclesfield Director of Rugby and Head Coach Geoff Wappett hailed Ross Winney’s try in the 22-19 win over Stourbridge as ‘One of the scores of the season’. 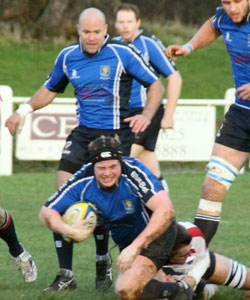 Winney capped off a brilliant team move that saw Blues advance almost the entire length of the field and to give his side an eight point lead.

Wappett said: “That was one of the great tries.

“It would hold up in any try of the season competition across most levels.”

Winney contributed 12 points in total and there were also scores from Chris Roddy and Ryan Parkinson.

The game got off to a unusually cautious start; neither side able to gain the upper hand in slippery conditions

After quiet opening exchanges, the home side were unlucky to behind, seeing a wide looping pass almost intercepted by last week’s hero Jack Moorhouse, only for it to fall to Stourbridge centre Tom Jarvis, who scored the first of his two tries in the corner.

Alistair Bressington added the extras to give his side an unlikely seven point lead, but Macc were confident of responding quickly.

They did respond ten minutes later after a period of concerted pressure saw Blues camped in their opponents 22, allowing Roddy to drive over the line and reduce the deficit.

Winney was successful with his first effort to leave the match level; the way it stayed until half time.

The visitors went ahead once more after the break, Nathan Bressington touching down in the corner, before brother Alistair converted.

Macc reduced the deficit to just two points when Parkinson finished much in the same fashion as Roddy, using his superior strength to bundle over the line.

Winney’s touchline conversion fell agonisingly short, but he redeemed himself shortly after with a penalty attempt to give his side a slender one point lead.

Scrum-half Charlie Mulchrone then came off the bench to make his first appearance since sustaining knee ligament damage against Fylde in October.

He made an immediate impact and was involved in the try of the match, as the ball was moved down field before Moorhouse sent a pass over the top to Winney to score under the posts.

He converted his own score to put his side firmly in control, as Blues went in search of a twelfth try bonus point of the season.

As the game entered the final stages, Stourbridge continued to throw everything they had at the home side, and Jarvis’ second try of the match with nine minutes remaining left the match on a knife edge.

Macc shut up shop and saw out the remaining time to seal a second win in a row and a fourth in five matches.

Wappett added: “They [Stourbridge] played some attractive rugby at times, but at the end of the day who won the game?

“I don’t like leaving anything to chance and that’s why we play the way we do, set a solid foundation and manage the game well.”

Macc make the short journey north to face Sedgley Park in the final fixture before the Christmas break next week.