Macclesfield travelled to their furthest fixture on Saturday; 200 miles and 4 ½ hrs on a coach to Alnwick on the Northumberland coast for another important game this season, against a side high in confidence having beaten Preston Grasshoppers the week before, and having not lost at home all season. Alnwick were two places and eight points ahead of Macclesfield in the league with a game in hand. Interestingly the last team to beat Alnwick at home was Macclesfield in March 2020 immediately before the first lockdown when the result was 18-19 to Macclesfield.

It was a long way to travel to lose a game and Macclesfield were determined that that would not happen, employing the same shape that had been successful the previous week against Wirral.

There were a few changes in the line up for the Alnwick game: Alex Davies returning at scrum half, and Sam Broster playing on the wing, the centre partnership of Harry Blackwell and Harry Oliver was retained and Myles Hall stayed at Full Back. The squad was strengthened with Matt Thorp and Jordan Simpson returning on the bench.

Some 25 people had made the journey to Alnwick to watch the game and spend the weekend exploring the Northumberland coast and visiting Bamburgh Castle. This boisterous bunch of supporters were expectant of an entertaining game, and they would not be disappointed. 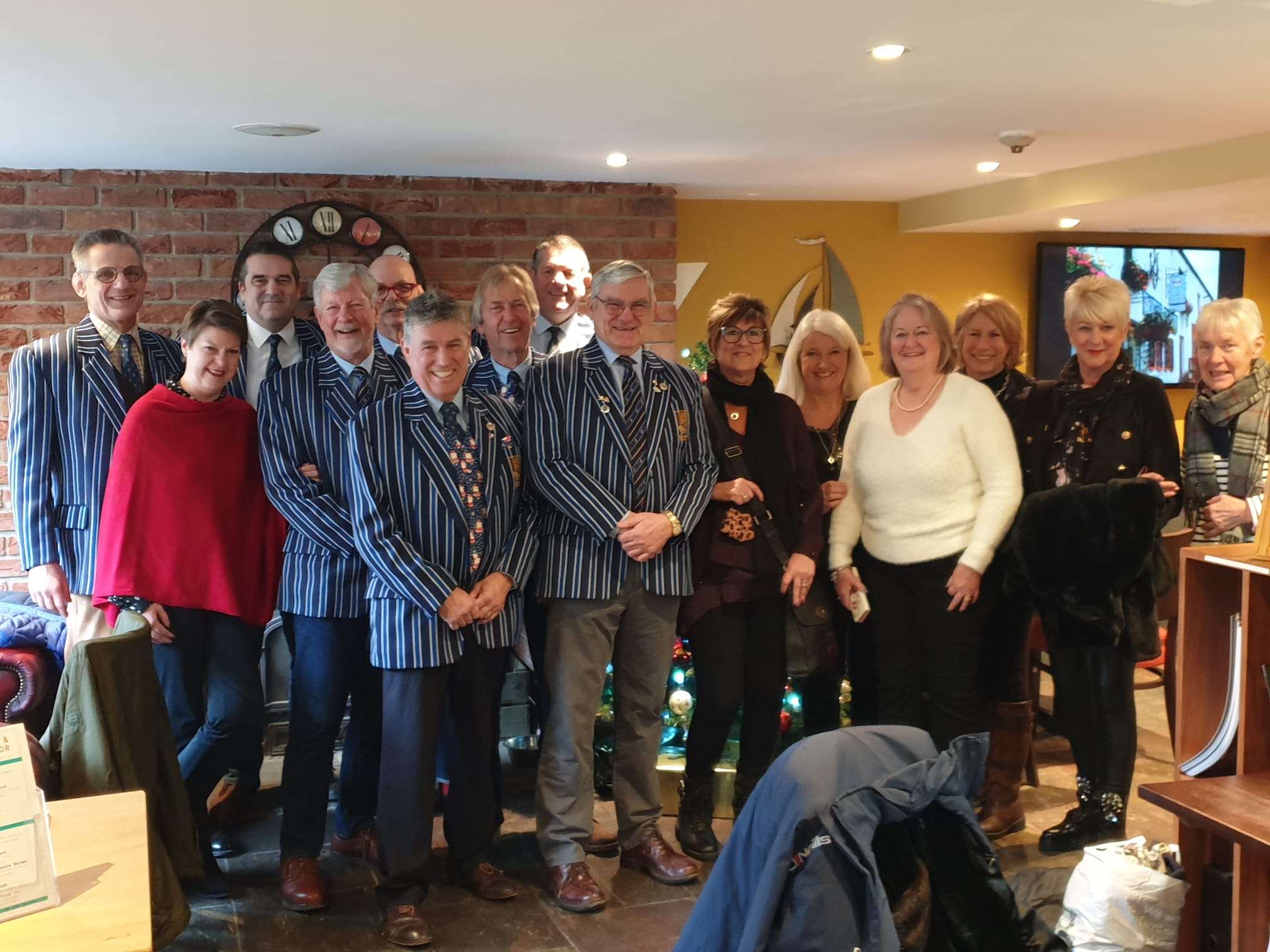 This was the best performance of the season so far from Macclesfield. The team took control of the game from the kick-off and put immediate pressure on the home-side forcing an early penalty, 45m out. Harry Oliver stepped up and converted to take Macclesfield ahead 0-3. The pressure continued and Alnwick were struggling to cope with the pace and intensity of their opposition. Another successful penalty kick extended Macclesfield’s lead to 0-6 after only 15 minutes being played. Macclesfield’s confidence was growing and the team looked more comfortable with the new shape. The forwards were clearly dominant and presenting quality ball for Alex Davies and the backs to run with. The two Harry’s in the centre were creating gaps and breaking through their opposite numbers repeatedly when finally, deep in to the first half, they created space with a cleaver move, before releasing Sam Broster down the right wing to score the first try of the game. The conversion was missed and Macclesfield had extended their lead further to 0-11. Macclesfield were playing entertaining and exciting rugby, the forwards were winning ball and the backs were creating space and finding some great running lines. It was some lovely forwards and backs interplay that ended with prop forward Brendan Berry sprinting 22m, and beating the cover defence to score near the posts. The conversion stretched the lead to 0-18 as the first half ended. 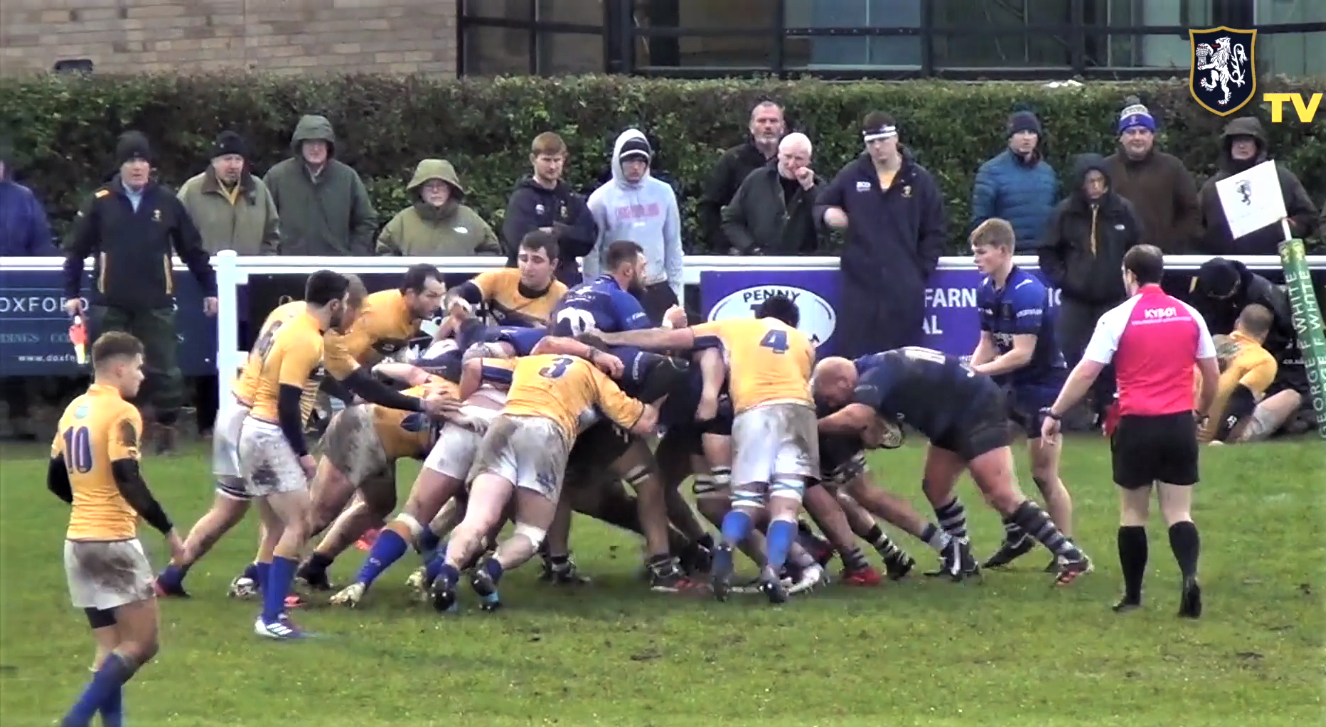 First half forward dominance from the Macclesfield pack

Alnwick changed their strategy in the second half, recognising that they were losing the forward battle and struggling to handle the Macclesfield backs, they decided to keep kicking for territory and forcing Macclesfield to defend deep well inside their 22 area. One such kick from their 10, Evan Moir, turned into a bigger bonus as the ball agonisingly tumbled towards the corner flag; Josh Redfern sprinting back to defend, seemed to have it covered, as he dived to secure it, only for the egg-shaped ball to make one more tumble in the air from his grasp, as their right winger arrived to kick it from his finger-tips and flop over the line to score. The conversion was missed and the score stood at 5-18. The Alnwick fly half continued to bombard the bottom right-hand corner of the pitch deep inside the Macclesfield 22 area. The Macclesfield defence were forced to drop back to catch the ball and got suckered in to a game of kickball back-and-forth, up and down the pitch. It is probably fair to suggest that the ball may have spent more time in the air than on the ground for periods of the second half. The repeated bombardment kept the pressure on Macclesfield and only a few minutes later Alnwick converted a second try to close the gap to 12-18 with 10 minutes to go. Time was running out but Alnwick were now only one converted try away from a huge turnaround. The home support was going crazy and the travelling supporters were getting behind their team, willing them to hold on for the last minutes of the game. The intensity was palpable on and off the pitch. With just 5 minutes to go and after more pressure inside the Macclesfield half the ball came loose and was kicked up the pitch in to the Alnwick half. The scramble for the ball led to a penalty for Macclesfield; with Harry Oliver stepping up and, cool as a cucumber, sending the ball between the posts to take Macclesfield ahead, 12-21 and to win himself the Man Of The Match award. Alnwick now needed two scores to win. Showing huge determination, good game management and great skill the Macclesfield forwards worked through numerous phases before the referee indicated the last play of the game, and the ball was kicked, gratefully in to touch. 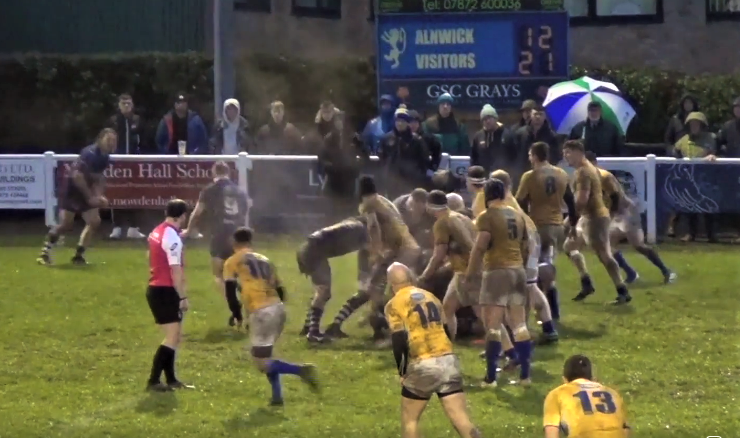 It’s game over by the boot of Alex Davies

This was, without doubt, the best all round performance of the season and at the halfway point Macclesfield are 6th in the table with only four points separating them from Alnwick in 5th. If the squad can stay fit and can continue to build on the style and quality of this game and can maintain the pace and intensity that they have begun to demonstrate then we can be positive for the remainder of the season.

Next Saturday Macclesfield 1st team host Northwich at Priory Park and the 3rd team host Liverpool University Veterinarians. On Sunday the Colts host Sandbach at Priory Park. The Club will also be holding its Christmas lunch on Saturday prior to the 1st team game.

It was a cheery Andy Appleyard that answered the telephone on Monday morning, when I gave him the rhetorical quip of, “Good day at the office Andy”; “It certainly was Wilkey, we went up there with no illusions; Alnwick had thumped Preston Grasshoppers the previous week and were unbeaten at home. The first half was text book rugby from the boys, everything that they did, they did well. We were dominant in the pack and the two Harrys combined well in the middle of the park creating space for what were two very good tries. Even when Alnwick managed to press us deep in the first half, our defence kept them out, which left us in a strong position at halftime. It was no surprise to see them change their tactics in the second half; they know their pitch well, they kicked to the corners and they won the kick battle, forcing us to defend deep, for long periods. But the defence was solid, the boys were brave and strong. There are some takeaways from the kicking battle to work on, but we go again next week against Northwich.”

Andy won’t be too worried about Saturday’s opponents; Northwich has had a torrid time in the North Premier; they are a team that is just not equipped for this level of rugby and will be more than happy to drop back down a level. The first two games in January are a different kettle-of-fish, first Otley away followed by Preston Grasshoppers at home. Harry Harding picked up an elbow injury on Saturday which may keep him out for a few weeks; Aaron Wilman is also likely to be out for another few weeks, added to which there are some players unavailable (Some may say, it wouldn’t have happened in my day!).

The pre-match Christmas lunch on Saturday sees the conclusion of our silent auction for Motor Neurone Disease. I will be bringing the hammer down on my, much-loved, signed Jonny Wilkinson, World Cup compilation; anyone wishing to make a bid can do so via davidwilkeywilkinson@gmail.com 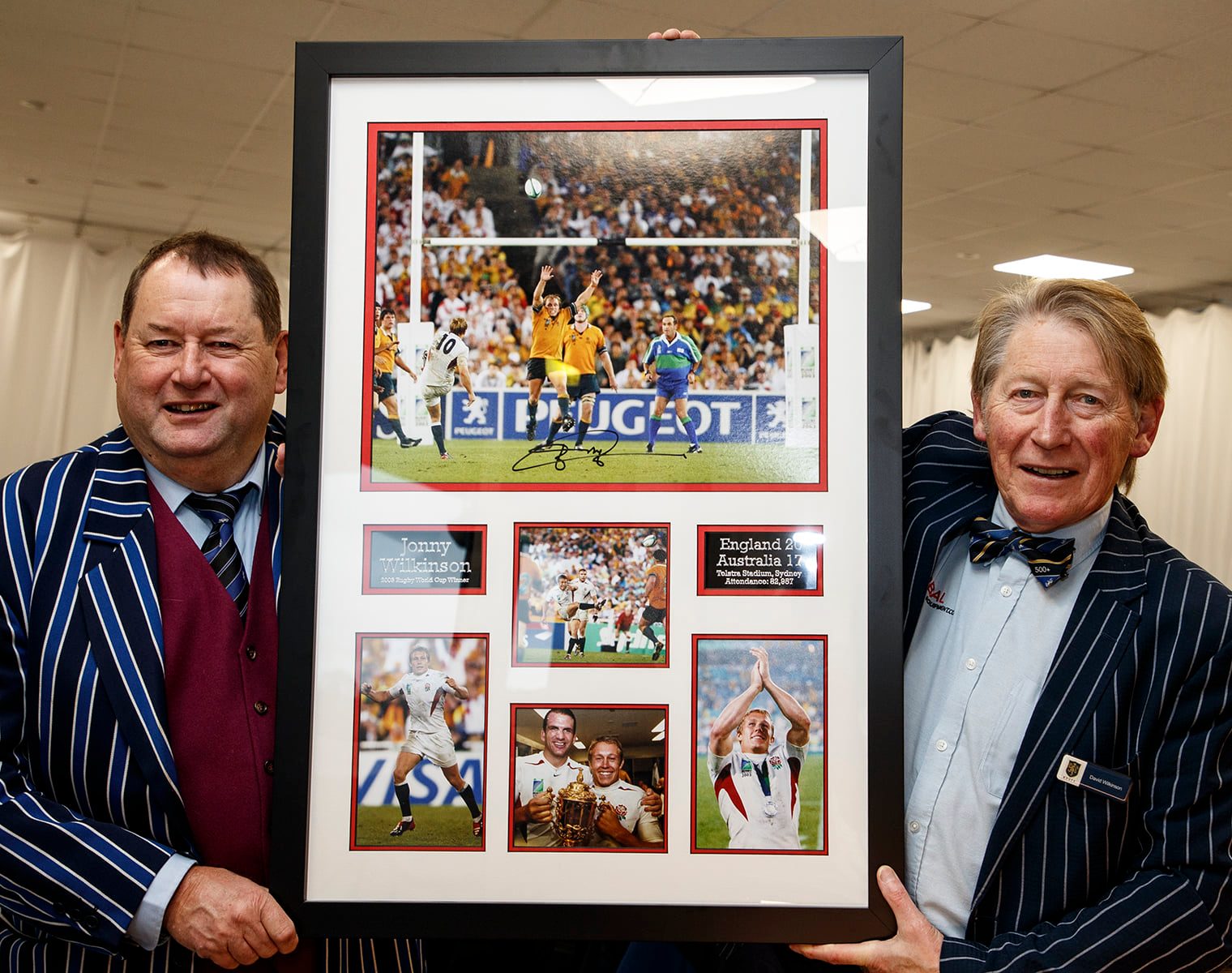 Despite a week of heavy rain, the pitch was judged playable and the game kicked off as planned.  Very heavy going from the outset, and Macc started well, winning a penalty in the first 5 minutes just outside Sandbach’s 22, kicked successfully by Tom Jennings.

Sandbach’s restart failed to go 10m, giving Macclesfield the scrum from the half way line.  After winning the Scrum, Macc played several phases working hard towards Sandbach’s 22, and again another penalty awarded for a high tackle.  Tom Jennings chose the posts again slotting it nicely giving Macc a good 6 – 0 lead.

The ground was getting heavier as time went on, and the Sandbach players started to gather themselves.  Both sides suffered from handling errors in the conditions, and after a Sandbach scrum the visitors started to put the pressure on, rewarded with the first try of the afternoon, converted making the score 6 – 7.

The remainder of the first half, Sandbach were definitely the stronger side, with Macclesfield on the back foot.  Despite some excellent defence from Macc, the second try went to Sandbach leaving the score Macc 6 – 12 Sandbach at the break.

The second half saw an initial resurgence, from both sides, (must have been some good refreshments); the first 10 minutes being played between respective 22s. Sandbach decided to play a much tighter game, short accurate passes and less kicking resulting in less handling errors and more time with the ball.

The conditions didn’t improve and sadly Macc didn’t help themselves playing a wider passing game causing more lost ball.  Macc lost flanker Pat Ellis, followed by Jim Curtis (Loose Head Prop) who had taken a knock. The result of which saw Lloyd Coates (normally outside centre) returning to the pitch, drafted in as flanker! The resulting scrums gave Sandbach an advantage and together with a lack of Macc forwards saw three quick tries by Sandbach.

The game, was played in great spirits from both, but resulted in a defeat for Macclesfield 6 – 31.