Trial matches, used to be one of the most competitive contests of the season, particularly if you were a new player or on the fringe of the first team; ‘Possibles’ would be keen to show that they could be a ‘Probables’, with others desperately wanting to hold on to their shirt, when they knew their position was potentially under threat. It’s not quite like that today, but there is still a very healthy inter-squad competitive edge, and so there should be.

Saturdays had been proving difficult to get the full squad together, and so, Tuesday was picked to hold the first of the pre-season warm-up games. Blues v Whites was a competitive mix of players and the first full-on, no-holds-barred, contest since the first lockdown in March 2020. The players hit the blocks running, with some controlled aggressive play, and with relatively few mistakes. The evergreen Sam Moss was first to score for the Whites, breaking off from a maul; but the Blues were quick to respond, Sam Broster, showing his pace, got on the outside of the defence, and quick hands from Tom Morton, back on the inside, found Josh Redfern following up to score. It was the first of several attacks from Redfern, who was revelling in the freedom of playing at eight.

The end of the first quarter saw players changing shirts from side to side, which seemed to immediately effect the quality of play, but once a rhythm was restored to the game, those now wearing Blue fashioned a couple of scores to Tom Travis at 15 and another to Redfern. Further tries came to the imperious Sam Moss, after a barnstorming run by Jordon Simpson; Brendan Berry sprinting from a maul after a good lineout take from Sam Jones; James Hampson, looking sharp, fed his full back, and from the resulting ruck Harry Harding had saved enough energy to carry three defenders over to score; there were further scores to Lloyd Smith-Coates after a Broster break, with Sam scoring himself after picking up a loose ball. 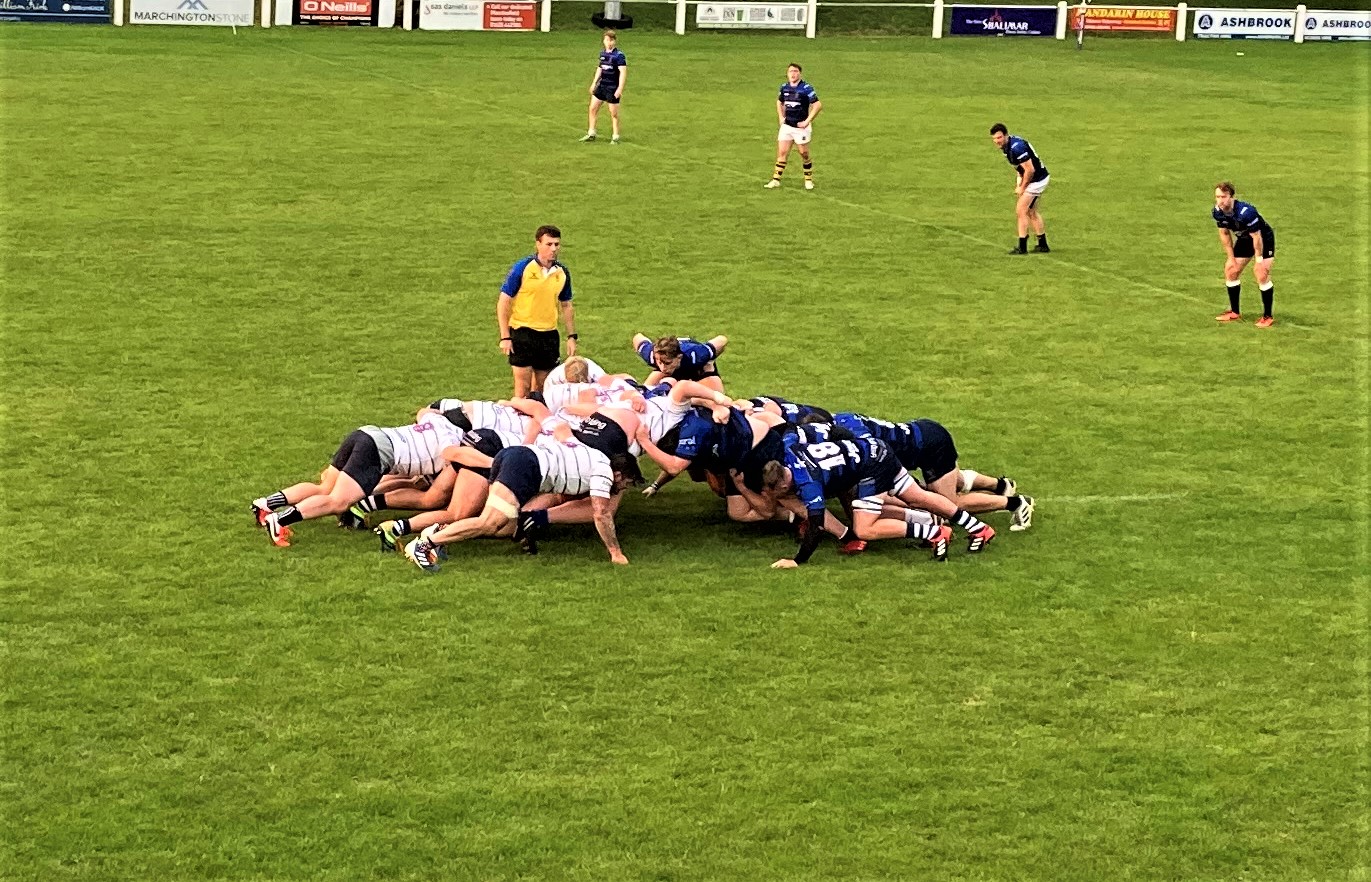 Scrums at last, and some were a real tussle!

What was evident was the pace of the game, the ball being recycled quickly and passed quickly to the wings, then back inside to supporting players, all done at pace. There were about forty players utilised on the night, so continuity was always going to be a problem, that said the tempo hardly ever dropped, although the ball was, on a few critical phases. Of the new boys on show, several caught the eye, with Simeon Meek and Aaron Wilman both looking very powerful in the set-piece; as Billy Robison is probably out for some time, their propping will be much needed. Also, out at the start of the season will be Harry Oliver (now running again), Sam Stelmaszec and Harry Blackwell although all are expected back within 6 weeks or so. Competition for starting places will be fierce, and so it should be, although after Tuesday evening Andy Appleyard, will have inked-in a few names on his ‘Probables’ list.

There are two more chances to shine before the first league game against Burnage on September 4th, on Saturday Priory Park welcomes Hull for a 2.00 pm kick-off. As a National 2 side, Hull will provide a stiff challenge for the squad.  This will be followed by an away fixture against Bowden on Thursday 26th kicking off at 7.00 pm.

Andy Appleyard had this to say re the Tuesday session and Saturday’s challenge: “We were really please with how it went, the players were holding a bit back, but that can be expected. We identified a few things to work on, which we did on Thursday, we’ll see how they put them into practise on Saturday. Hull is going to be a step up, they’ll be a very strong side, so it’s not necessarily about the win, more about the performance”.

Get down early on Saturday for a 2.00 pm kick-off and get behind the boys. All the usual hospitality will be on offer from our fabulous new facilities.

RUGBY WITHOUT THE BISH, BOSH, BASH!

Besides the full-on, 15-a-side version of the game, there are a number of variants played at Priory Park, that are all fully inclusive, no matter your: size, age, sex and fitness! There are all kinds of games for minis and juniors, plus two growing games for Adults: Walking Rugby and Touch Rugby. Coach of Touch Rugby, Simon Dempsey explains what its like to be part of this fast-growing sport. 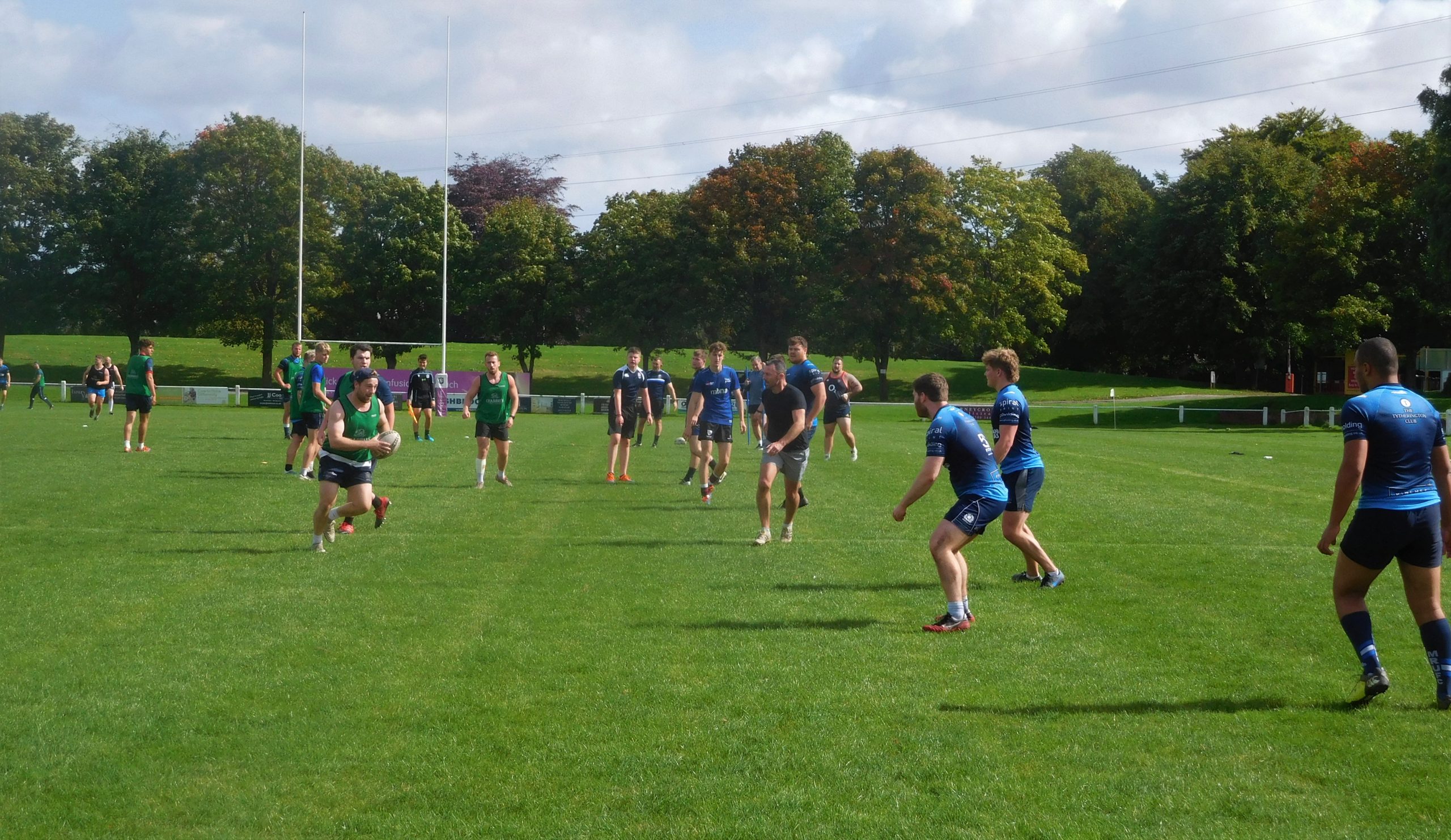 Do you want a great way to improve fitness and meet new people? Then look no further, it’s Touch Rugby for you, played at Macclesfield Rugby club on Thursday evenings at 7pm.

Touch rugby is one of the fastest growing sports in the UK, where gender, fitness, age, ability and body shape play no bearing on the success of participation. It’s a fantastic way to have fun whilst enjoying the flowing nature of the game, as a complete newcomer or experienced players, everyone is welcome.

The touch sessions are really gaining momentum with the Ladies’ team, ex-players and total novices to the game, all actively getting involved, with such diversity there is a real buzz about it. There are also plenty of skilled players to assist in improving skill sets and provide years of experience to guide development, in a fun and friendly way.

There is no contact, scrums, lineouts or other technical areas of the traditional 15-a-side game, just free flowing, and fast-paced ball handling with ample space to enjoy, learn and flourish. In essence, enjoy yourself, stay healthy, make new friends and become a part of the rugby family in a relaxed no pressure environment.

It’s free, and afterwards, enjoy yourself in the awesome facilities that the Club has to offer, with great people, freshly made food, and a variety of beverages on tap! MRUFC is a real family-based community club with a wonderful vibe, the facilities on and off the pitch are truly amazing with members to match, it’s where memories and friendships are made forever!

Well, the ‘Cheshire Widows Sons Masonic Bikers Association’ did! After one of their members, Jeff Arnold, heard from his Grandson, Olly Arnold, a keen member of the U8s, that Macclesfield Rugby Club had started an appeal fund to purchase two heart defibrillators; knowing the importance of these life-saving machines, the Bikers, as is their way, came up with £200. 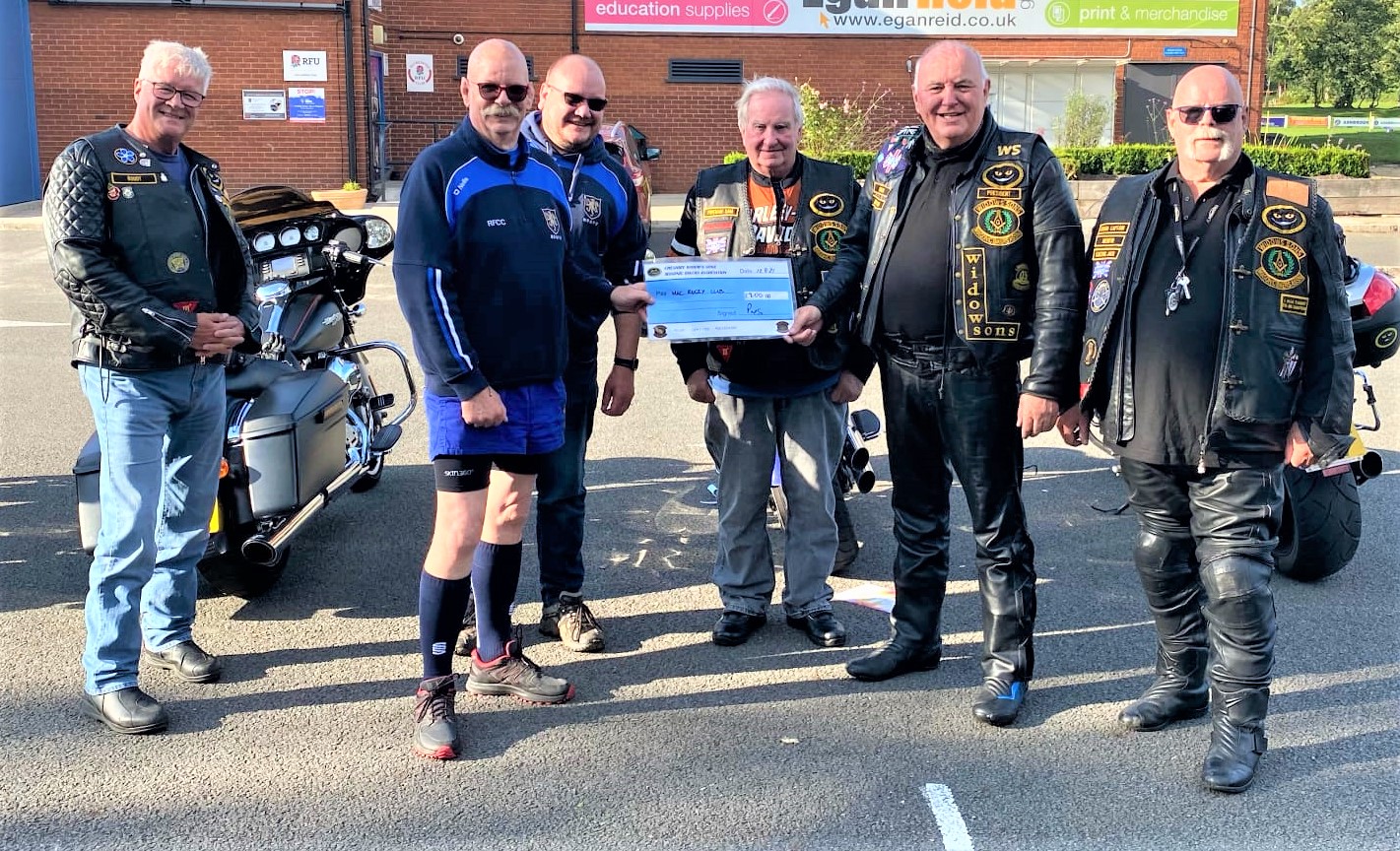 Bob Cooke (Club Secretary) and Phil Mason (Mini and Youth Chairman) received the donation cheque at the Club from Jeff Arnold and fellow bikers from the Cheshire Widows Sons Masonic Bikers Association, resplendent in their leathers.

So far, we have managed to raise just over £700, and are looking good to purchase our first external defibrillator (fully linked to the Ambulance Service) as soon as possible. But we need two, so our target is another £1300.

Working with Community Heartbeat Trust, it is planned to install two external defibrillators at the club ASAP and before the end of the season.  Should the worst happen, a defibrillator can literally mean the difference between life and death, having a defibrillator available within 2 minutes can vastly increase the chances of survival.

Anyone wanting to donate please contact Phil Mason (phil@philmason.co.uk or 07738 727638).  All donations, however small, will be welcomed.